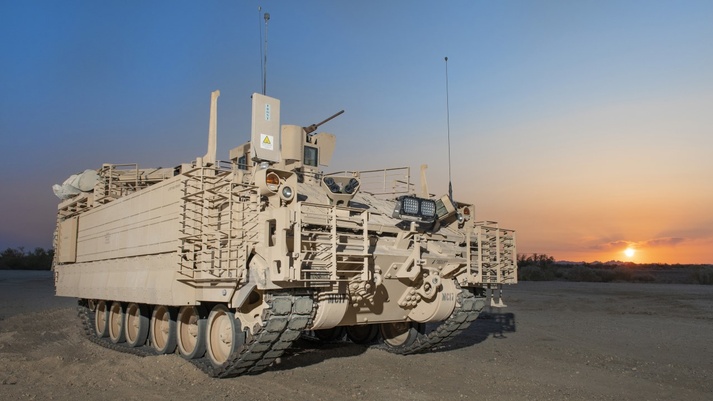 The U.S. Army has awarded BAE Systems two contract modifications worth up to $575 million for the low-rate initial production of the Armored Multi-Purpose Vehicle (AMPV).
These awards mark the beginning of low-rate production for the highly mobile, survivable, multipurpose vehicle designed to meet the mission of the U.S. Army’s Armored Brigade Combat Teams (ABCT).
“Moving into this phase of the AMPV program is exciting because it brings soldiers one step closer to deploying this critical capability for completing their missions and coming home safely,” said Bill Sheehy, AMPV program director for BAE Systems’ combat vehicles business. “We have been preparing for this moment and are ready to take this program to the next stage.”
Previously awarded funding to support production planning, combined with the $128 million January award allowed BAE Systems to start production. A second award in February for $447 million brings the total LRIP funding so far to $873 million.
The AMPV program provides the Army with a more survivable and mobile fleet of vehicles that addresses a critical need to replace the Vietnam War-era M113s. Production will include five variants of the AMPV: command and control, general purpose, medical evacuation, medical treatment, and mortar carrier.
The AMPV is a mature, cost-effective solution that leverages the most modern and proven combat vehicle designs. It meets the Army’s force protection and all-terrain mobility requirements, enabling the AMPV to maneuver with the rest of the ABCT. Commonality within the ABCT also reduces developmental risk and streamlines maintenance, providing significant cost savings to the Army.
These contracts come following the Engineering, Manufacturing and Development phase and a Milestone C decision. Under the earlier EMD award, the company produced and delivered prototype vehicles to the Army for test and evaluation purposes. The initial award in 2014 also provided options to begin the LRIP phase prior to the completion of the EMD phase, at which time the company would produce up to approximately 460 additional vehicles for a cumulative contract value of up to $1.2 billion.
BAE Systems is a premier supplier of combat vehicles to the U.S. military and allied nations. We have an extensive manufacturing network across the United States and continue to invest in it. Work on the program will take place at BAE Systems’ facilities in Aiken, South Carolina; Minneapolis, Minnesota; San Jose, California; Sterling Heights, Michigan; and York, Pennsylvania.
022/2019
Contact