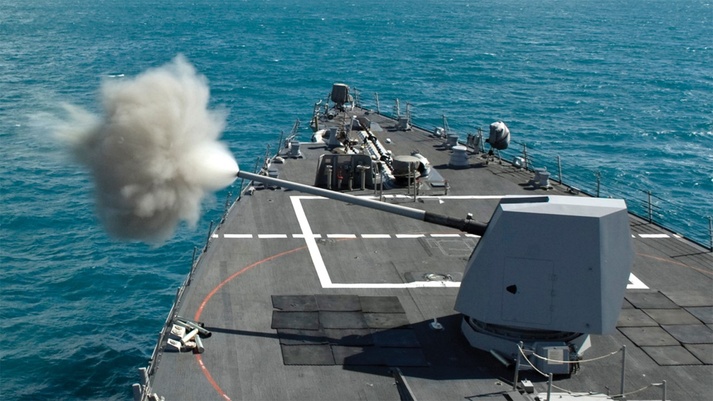 BAE Systems will deliver five Mk 45 naval gun systems to the U.S. Navy under a recently issued $70.6 million contract to upgrade existing guns to the Mod 4 configuration, increasing their firepower and extending their range.
“The Mk 45  retains its reputation as the industry standard for large-caliber naval guns, and the Mod 4 makes it adaptable to advanced munitions,” said Joseph Senftle, vice president and general manager of Weapon Systems at BAE Systems. “We are the world leader in developing and manufacturing maritime guns and producing reliable and affordable technology that meets the warfighter’s needs today and into the future.”
The Mk 45 is the lightest, most compact, and most widely deployed 5-inch fully automatic naval gun in the world, with more than 260 deliveries to the U.S. Navy and the navies of 10 other allied nations. The Mod 4 configuration consists of a structurally strengthened gun mount that increases firing energy by 50 percent, enabling munitions to travel faster and farther. A new fully digitized control system provides significantly greater computing power and features a touch-screen user interface.
The Mod 4 upgrade is a cost-effective solution to increase capability and adaptability for advanced munitions. The modernization of these gun systems will keep them in service for decades to come. Mk 45 guns are deployed on the Navy’s fleet of guided-missile Ticonderoga-class cruisers and Arleigh Burke-class destroyers.
Work on the Mk 45 Mod 4 upgrades will be performed at the BAE Systems facility in Louisville, Kentucky, with support from the company’s supplier base, and is expected to be completed by the end of 2023.
085/2019
Contact

Join BAE Systems at our state-of-the-art Louisville facility and help protect the lives of service members who protect us.
Explore now!