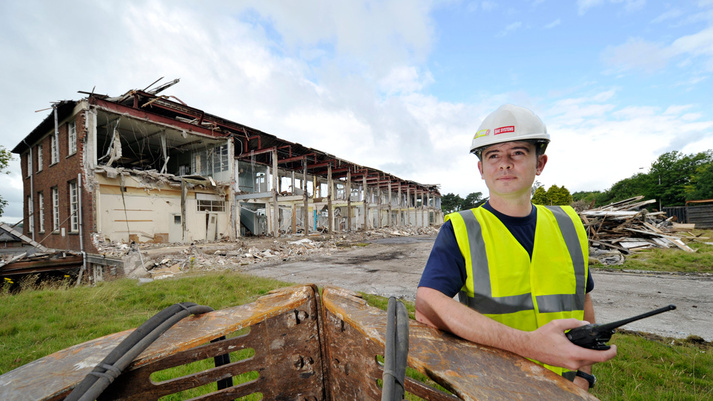 New land remediation activity for BAE Systems' multi-million transformation of the former Royal Ordnance site at Bishopton is leading to dramatic changes in the landscape around the Renfrewshire village.

The 15-year development initiative is one of the largest ‘brownfield’ projects of its kind in the UK and will transform the 1800 acre site into a thriving mixed-use complex which will include homes, commercial and community buildings, recreational facilities and huge community woodland park to complement the existing ‘village feel’ of Bishopton.

The current phase of land remediation has included the demolition of the site’s iconic Administration and Gatehouse buildings and with both the new north and south access roads for the site completed, the project remains on schedule to contribute to the local economy.

Suitable material generated during the remedial work is being recycled and reused on the landscaping activity on site including the new southern gateway to the development. The re-use of suitable materials is designed to reduce the need for imported materials and contributes significantly to minimising the number of heavy construction vehicles on the roads around Bishopton.

The current phase of remediation will:


The BAE Systems team are also working to ensure that any loss of ecological habitat is being mitigated under a programme of continuing surveillance, management and new habitat creation.

Lynda Johnstone, project director for BAE Systems, said the company was delighted with the continued progress on site.

“The completion of the demolition work on the site’s former administration block and gatehouse was a significant landmark for everyone involved in the project and with those buildings now gone the change in the landscape is striking,” she added.

“Against that background, the ongoing house building programme and the completion of the access roads and overbridge, the way in which the development will complement the existing facilities in Bishopton is quickly becoming clear.

“The new link to the M8 motorway is also a significant part of the future development, facilitating swift access to major transport networks and we are continuing to have constructive discussions with organisations keen to work with us on the commercial opportunities on site.”

The BAE team are currently working closely with the relevant local bodies around the establishment of the Bishopton Community Trust which will manage the company’s investment in new community facilities for the area.

Renfrewshire Council are also contributing significant resources in support of the successful completion of the project.

Taylor Wimpey, Cala and Persimmon Homes are building a range of homes on the residential element of the site which was named Dargavel Village following a competition won by Bishopton school pupil Emma Brown.