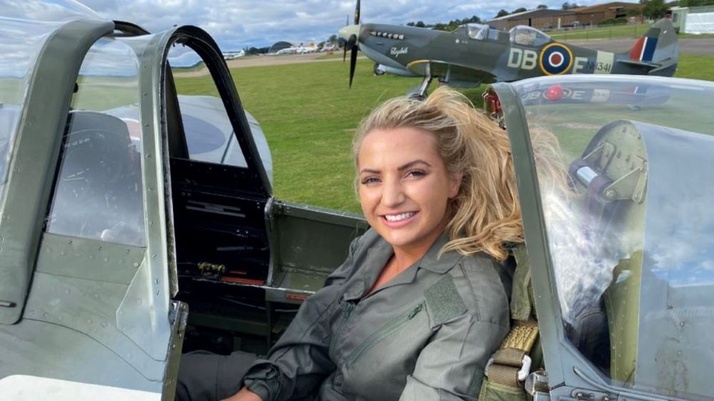 A Lancashire project manager working on Tempest, the programme to design and deliver a UK-led next generation Future Combat Air System, has taken to the skies after being honoured for her outstanding contribution to the project at a special awards ceremony.
Liv Perry, who works at BAE Systems’ Air sector site at Warton, won a flight in a Spitfire T Mk IX aircraft, operated by the Aircraft Restoration Company at the historic Duxford Aerodrome, as part of her prize for being awarded the inaugural Spirit of Tempest overall award.
The Spirit of Tempest Awards were voted for earlier this year by a panel of senior representatives from the Royal Air Force, industry and academia. They were set up to recognise those people from across Team Tempest who have demonstrated outstanding commitment and behaviours in furthering the project over the past 12 months.
The judges voted for individual winners from each of the four Team Tempest partner companies (BAE Systems, Leonardo UK, MBDA UK and Rolls-Royce) and from the Ministry of Defence. From those winners, the panel then chose Liv as the overall Spirit of Tempest winner.
The awards ceremony took place this week at Duxford.
Liv, who recently completed a two-year secondment at Team Tempest Headquarters in Farnborough before returning to work on the project in Lancashire, was recognised for her work whilst on secondment in bringing together partners from across the enterprise to help develop early concept ideas for a Future Combat Air System.
Liv said: “I’m delighted to have been selected as the overall winner of the Spirit of Tempest Awards. To win this award is a huge honour especially to be recognised across a programme of this scale and one that involves so many talented people. It’s a moment in my career that I will never forget.”
In addition, Lancashire engineer Robyn Considine was voted the BAE Systems Spirit of Tempest winner for her work to set up and successfully grow a Developing Engineers Forum within the project, giving engineers a forum to network and develop within the team. Robyn’s prize was a flight in a Harvard T Mk6 aircraft.
Robyn added: “Part of the challenge that the Company faces is how we transfer knowledge to the next generation of engineers who weren’t even born the last time we designed and delivered a combat air programme. Within the programme, developing engineers are paired with subject matter experts in their day jobs. The aim of the group is to share knowledge learnt, the challenges that we’ve faced and solutions to those challenges with the rest of the group to increase the rate of development of the members.”
Wg Cdr Colin Welsh, from Team Tempest Headquarters at the Royal Air Force’s Rapid Capabilities Office, said: “Team Tempest draws together over 2,000 of the very best people within UK industry and defence. We are united in our common goal to succeed, guided by our core values of trust, excellence, empowerment, strategic focus and timeliness.
“Our inaugural awards allows us to celebrate those who best embody these values, regardless of their role in our broad team and we are delighted to share in the success of these incredibly deserving winners.”
The Tempest programme is being delivered by Team Tempest – combining the expertise of the UK MoD, BAE Systems, Leonardo UK, MBDA UK and Rolls-Royce. Working with international partners, the team is leading progress towards development of an internationally collaborative Future Combat Air System which will ensure the Royal Air Force and its allies retain world-leading, independent military capability for decades to come.
The programme will pioneer cutting-edge technologies, including those assisted by Artificial Intelligence, machine learning and autonomous systems, to meet the capability requirements of future conflicts. It will be operational in the mid-2030s.
Contact

The future of Combat Air

Tempest is focused on delivering a capable, flexible and affordable system by the mid- 2030s, providing military, economic and industrial benefit to the UK and our international partners.
Find out more
Twitter