What We Do Products & Services Eurofighter Typhoon 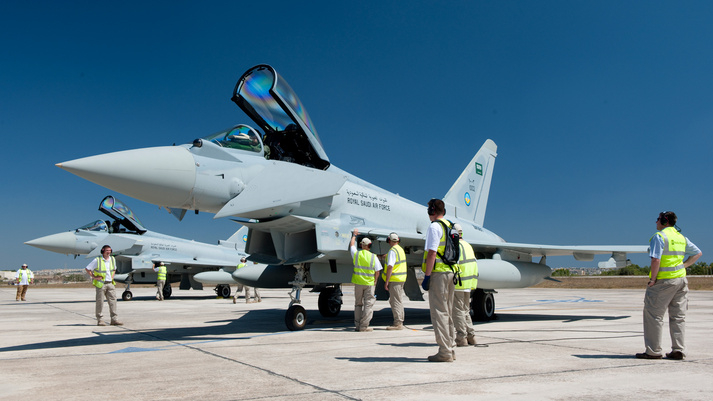 Eurofighter Typhoon is the most advanced multi-role combat aircraft available on the market today. Flexible, agile and enduring, it provides simultaneously deployable Air-to-Air and Air-to-Surface capabilities.
Flexible, agile and enduring, it provides simultaneously deployable Air to Air and Air to Surface capabilities. It is in successful operation in six nations and on order in two more.
Typhoon gives air forces the capability to effectively deliver a full spectrum of air operations - from air policing and peace support, through to high intensity conflict - thanks to its inherent flexibility and adaptability. It is is in operational use around the globe 24 hours a day, 7 days a week, 365 days a year.
The aircraft's swing-role capability provides the widest possible range of Air to Air and Air to Surface mission profiles.
Together with our partners, we have developed an aircraft that boasts unrivalled combat-proven capability, impressive situational awareness, high survivability and the most advanced array of integrated sensors. In short, Eurofighter Typhoon is a total solution for any modern air force.
Typhoon is an inherently flexible platform, designed to be continually upgraded. BAE Systems and the Eurofighter partner companies are continually enhancing the aircraft, ensuring it continues to meet operational demand and the emerging threats of the future for decades to come.

Typhoon’s Phase 1 Enhancement (P1E) upgrades, delivered in 2015, meant the platform became a high-end multi-role weapon system, with Air to Air capability including ASRAAM and AMRAAM weapons and the integration of Paveway IV for precision Air to Surface operations.

Development flight testing for the Phase 2 and Phase 3 Enhancement programmes is underway now. P2E will bring a range of new, long-range capabilities to the aircraft including:
P3E will introduce a low collateral, high precision strike air-to-surface capability to Eurofighter Typhoon through integration of the Brimstone Air to Surface weapon, giving a precision effect with low collateral damage against fast-moving armoured targets.

Eurofighter Typhoon’s capability evolution is continuing, with the next phase of enhancements being defined.
The flexibility of the aircraft will mean continual evolution of weapons, such as SPEAR and Marte-ER, sensors and information management to ensure Typhoon continues to meet its future operational requirements and is equipped to tackle the threats of tomorrow.

Theatre dominance comes through reach, vision and performance.
Eurofighter Typhoon’s AESA radar, the Captor-E, is now in developmental flight test on the aircraft.
The large-area nose of the Eurofighter Typhoon allows more than 1,000 Transmit receive Modules to be fitted increasing maximum detection range and power.
An innovative re-positioner offers an exceptionally wide field of regard giving huge tactical advantage and flexibility. In addition, the system offers simultaneous multifunctional performance and capability, Data-link capabilities, electronic attack and electronic support measures.
The Captor-E radar will offer a variety of benefits over M-Scan, including improved detection and tracking ranges, decreased track latency, advanced Air to Surface capability and enhanced electronic protection measures.
This radar capability will further improve Eurofighter Typhoon's combat effectiveness, allowing the aircraft to continue to maintain its superiority over future-threat combat aircraft.
The radar system is being designed to fit both Tranche 2 and Tranche 3 aircraft offering customers the freedom to retrofit their existing Eurofighter Typhoon aircraft when required.
The first production orders were placed at the start of 2016 with the required capability to be available for the first deliveries to the Kuwait Air Force – Typhoon’s eighth customer.

Every bit as important as a Typhoon's weapon enhancements, the Striker II helmet is at the forefront of aviation engineering.
Striker II is a fully digital helmet solution with an integrated night vision camera that provides today’s combat pilot with exceptional night vision and target tracking technology.
Striker II has a ‘plug and play’ capability with the Typhoon aircraft, meaning the helmet can be used in any Typhoon aircraft standard without the need to change aircraft hardware.

In addition, integrated night vision capability which removes of the need for separate night vision goggles is a major step forward for pilot comfort and provides a seamless day/night solution.
Two successful phases of flight trials as part of work to integrate the helmet on to the Typhoon aircraft have been undertaken in the past two years. This has proven the maturity of the Striker II technology, which will be a vital asset to the Eurofighter Typhoon pilots of the future.
عربي