When Field Artillery (FA) troops go into battle, their mission is to shoot, move, and communicate. The M109 family of self-propelled howitzers helps the U.S. Army accomplish this mission through mobile long-range indirect fire, capable of striking adversaries beyond the horizon.

BAE Systems has been assisting in this effort by partnering with the Army to upgrade the fleet with the M109A7. The M109A7 program adds greater mobility and survivability to the M109s since deliveries first began in 2015. The U.S. Army delivered the ARNG’s first M109A7 platforms to the North Carolina National Guard’s 30th ABCT in Fort Bragg, North Carolina in 2021. The delivery marked an important step in the Army’s modernization plan and offered Soldiers the opportunity to conduct training in a newly fielded system.

“The Army National Guard Field Artillery formations have rich traditions of supporting our nation in times of war,” said Keith Klemmer, BAE Systems M109A7 business development manager.  “Today, our Army and our nation depend on these formations more than ever.”

A newer version of the M109

The M109A7 is the latest upgrade in the M109 family of vehicles as the primary indirect fire support system for the ABCTs. The new upgrade modernizes the vehicle’s chassis components common to the Bradley Infantry Fighting Vehicles (IFV) and Armored Multi-Purpose Vehicles (AMPV), and provides greater survivability and commonality with existing systems in the ABCT.

The new chassis, power train, and suspension components reduce operational sustainability costs by replacing obsolete components. The addition of the 600 volt system replaces the legacy hydraulics system for increased accuracy and faster target engagement. It also enhances the vehicle’s “shoot and scoot” mobility to make it hard for the enemy to return fire.

With the ARNG making up the majority of the Army’s M109 artillery battalions, equipping these units with M109A7s is critical toward ensuring the Army has the most advanced technology available. ARNG M109 battalions are based in 14 U.S. states, and the 30th ABCT at Fort Bragg is the first unit to field the A7.

M109A7 is cost-effective, sustainable, and survivable. The vehicle has commonality in spare parts, diagnostic tools, and maintenance procedures with the Bradley and AMPV family of vehicles, eliminating the need to carry multiple parts and maintenance tools. Because of this, the M109A7 reduces the logistics burden and sustainment footprint on the ABCT to provide critical support to field artillery brigades.

More mobile and lethal than ever, this cutting-edge, battle ready platform enhances combat power and equips the force to meet global demands.

“The M109A7 provides the Army National Guard Field Artillery formations with a modern, lethal, and survivable platform that will endure well into the future,” Klemmer said. 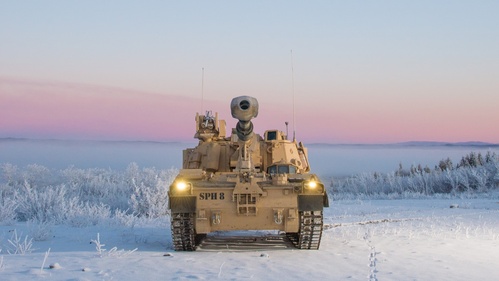 Related News
What’s it like to work with a company protecting what really matters?

Find a career that’s meaningful and empowering.
Make your mark