What we do Products & Services NAVSOP

Navigation via Signals of Opportunity (NAVSOP) 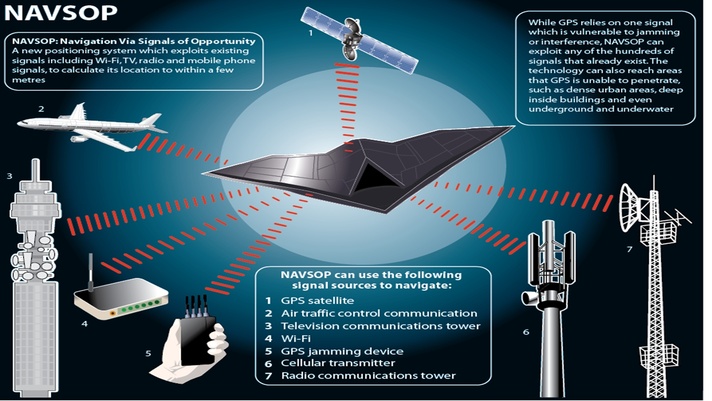 BAE Systems has unveiled its latest research on an advanced positioning system that exploits existing transmissions such as Wi-Fi, TV, radio and mobile phone signals, to calculate the user’s location to within a few metres.

Military platforms commonly use Global Positioning Systems (GPS) to find their position and navigate. GPS rely upon a specific and relatively weak satellite signal that is vulnerable to disruption . Known as Navigation via Signals of Opportunity (NAVSOP), BAE Systems’ new system is able to calculate its position by making use of the hundreds of different signals that are all around us.

By exploiting such a wide range of signals, NAVSOP is resistant to hostile interference such as jamming (a particular weakness of GPS) and spoofing, where a bogus signal tricks a device into misidentifying its location. The new system can learn from signals that are initially unidentified to build an ever more accurate and reliable fix on its location. Even the signals from GPS jammers can be exploited by the device to aid navigation under certain conditions.
The real beauty of NAVSOP is that the infrastructure required to make it work is already in place. There is no need to build costly networks of transmitters and the hardware behind the system is already commercially available. Another benefit is that it can be integrated into existing positioning devices to provide superior performance to GPS.

A major advantage of the system is its ability to function in places where GPS is unable to reach, such as dense urban areas and deep inside buildings. It is also able to work in the most remote parts of the world, such as the Arctic, by picking up signals that include Low-Earth-Orbit satellites and other civilian signals.
From aiding soldiers operating in remote or dense urban areas to providing improved security for Unmanned Aerial Vehicles (UAVs), which could face attempts to disrupt their guidance systems, NAVSOP has a wide range of potential military applications.
Among those pioneering this area of research is Dr Ramsey Faragher, a Principal Scientist from BAE Systems Advanced Technology Centre, who recently led a team that received a prestigious award from the Institute of Navigation for a ground-breaking paper on how aspects of the technology work indoors.

Dr Faragher said: “The potential applications of this technology are already generating huge excitement in both civilian and military circles. This research is a great example of BAE Systems working closely with potential customers to not only improve the performance of existing technology, but also tackle their weaknesses head on and find innovative ways to reduce or eliminate them.”

James Baker, Managing Director at BAE Systems Advanced Technology Centre, said: “At a time when the need to be innovative and resourceful is more important than ever, this capability represents truly outside-the-box thinking by providing a cost effective system with a wide variety of different applications. This technology is a real game changer when it comes to navigation, which builds upon the rich heritage that both BAE Systems and the UK have in radio engineering.”
This research is generating interest in both defence and civilian domains where its uses could include helping fire and rescue services find their way through smoke filled buildings and enhancing the safety of lone workers and security staff.