Woodford Aerodrome, some 6.9 miles north of Macclesfield, was purchased by A.V. Roe & Co Ltd in 1924.

The purchase followed after the company were told that the lease on their previous factory at Alexandra Park Aerodrome in South Manchester, was due to expire and it was not going to be renewed by the Air Ministry, owners of the site. The search for a new home ended when Avro identified a patch of land on the edge of Woodford Village known as New Hall Farm.

Creation of the new aircraft factory stumbled slightly when the first of the new hangars was destroyed in a storm but over the next few years the site was developed extensively creating assembly and test facilities. AV Roe invited the Lancashire Aero Club to move with them to Woodford after they too were ‘evicted’ from Alexandra Park.
One of the first aircraft to emerge from Woodford was the Avro Avian which was produced between 1926 and 1928, and some 405 examples of the Training and Touring biplane were produced. 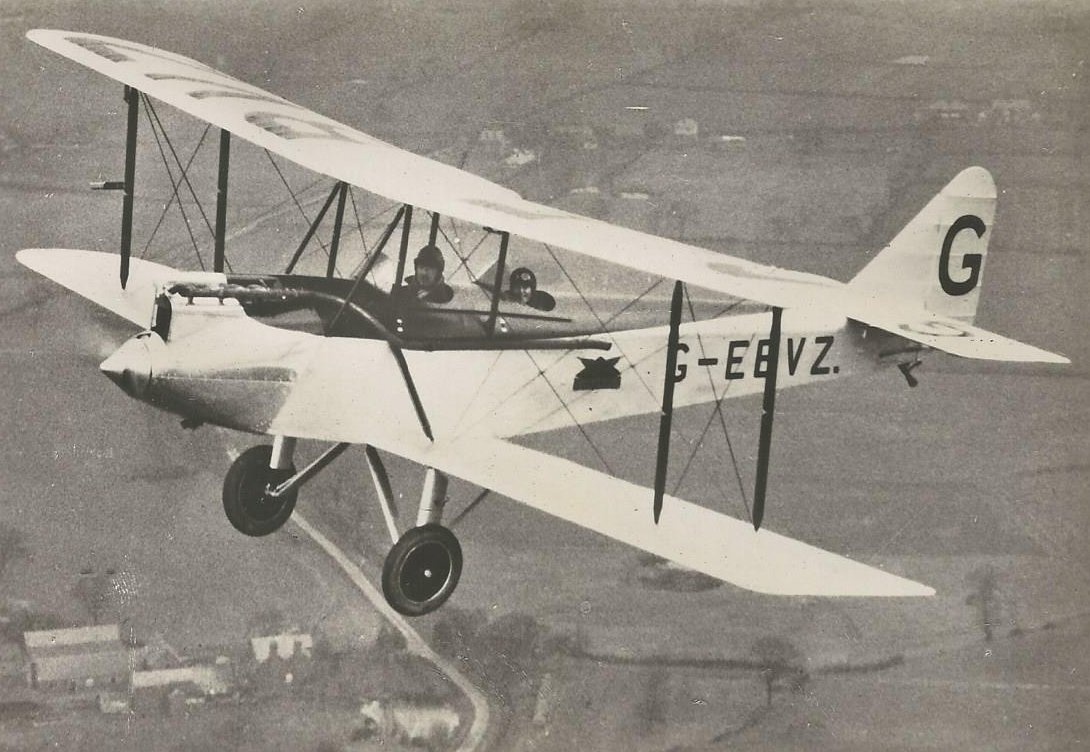 Avro 581 Avian (G-EBVZ)
Concrete runways were laid in the early 1930s, with extensions added over the next decades to accommodate a range of increasingly larger aircraft.
In 1939, the new Avro facility at Chadderton (on the outskirts of Oldham) started producing the Avro 679 Manchester, a twin-engine medium bomber which first flew from Woodford on 25th July that year.

Lancaster bombers nose sections at Chadderton
As government backed military aircraft requirements switched to patrol and reconnaissance, Avro responded with the Avro Shackleton, one of the RAF’s longest serving aircraft types. Chief Test Pilot J.H. ‘Jimmy’ Orrell took the Shackleton on its maiden flight from Woodford on 9th March 1949, the first in a line of 149 aircraft which served through until 1991. 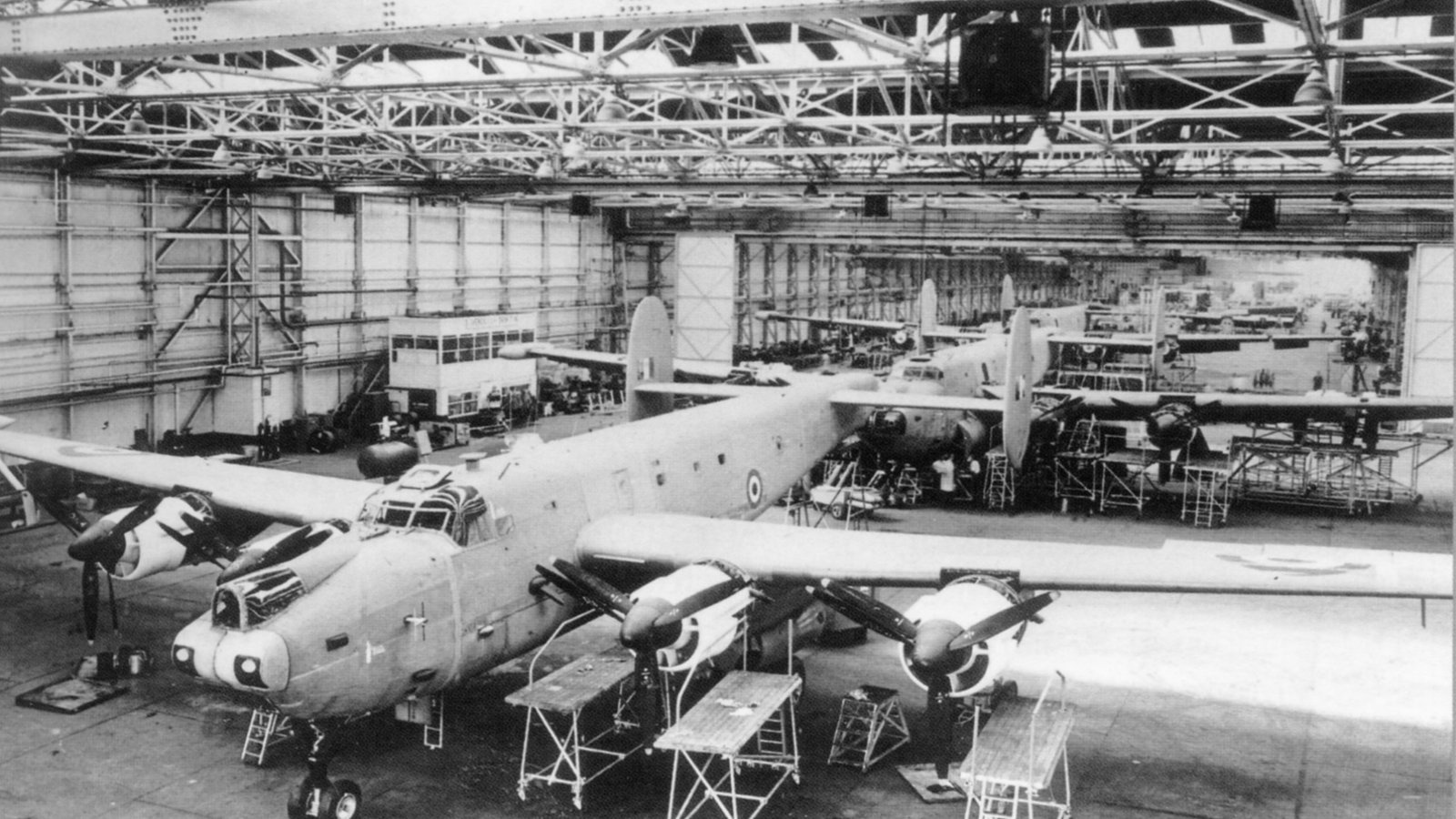 Avro Shackleton Manufacturing
The factory site at Woodford continued to expand as did the length of the main runway in order to accommodate the next iconic Avro type, the Avro Vulcan.
Much has been written about the Avro Vulcan, which recorded its maiden flight at Woodford on 30th August 1952. By far one of the most popular stories was regarding the unconventional manoeuvres (the Vulcan roll) performed by Test Pilot Roly Falk before opening the throttle to such a point that he shattered several factory windows.
The Avro Vulcan served as part of Britain’s Nuclear Defence V Force and is still regarded as one of the best aircraft of the Cold War period. 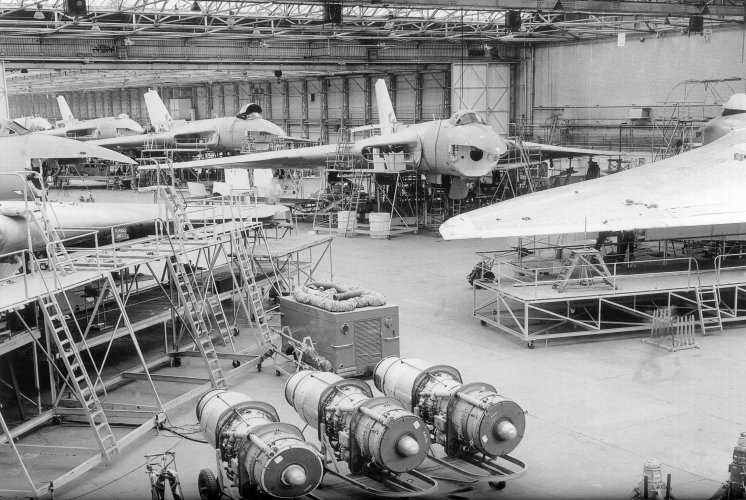 Avro 698 Vulcan B.2 final production at Woodford 1960
With a further downturn in military orders, Avro embarked on civilian projects with the design of the Avro 748 in 1958, a twin-engine short / medium-range airliner aircraft which eventually flew in 1960.
The Avro 748 saw success around the world with 380 aircraft built, including 37 military variants known as the HS Andover. 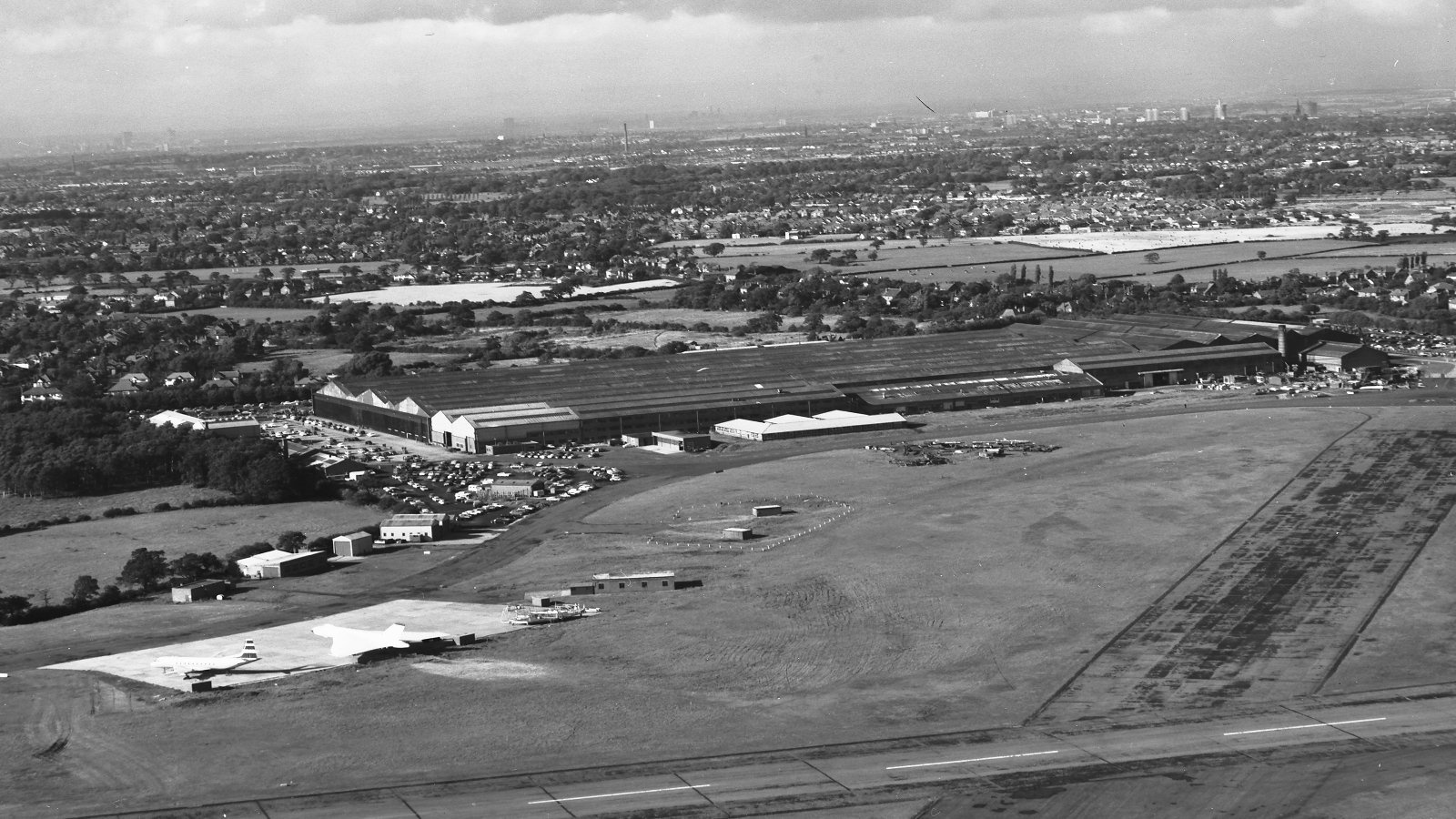 Aerial view of Woodford in 1966
At the same time, the aircraft industry was undergoing mammoth changes, especially with the government-led rationalisation resulting the amalgamation of Avro into Hawker Siddeley Aviation.
The name above the door at Woodford may have changed but the spirit remained. It played a major part in the development of the Commercial Aircraft Division.  Through the production of the now HS748, and work on other commercial aircraft such as the HS146, Woodford remained an integral part of the UK aerospace industry.
In April 1977, and as part of the Aircraft and Shipbuilding Industries Act, Hawker Siddeley was merged with British Aircraft Corporation to form British Aerospace. 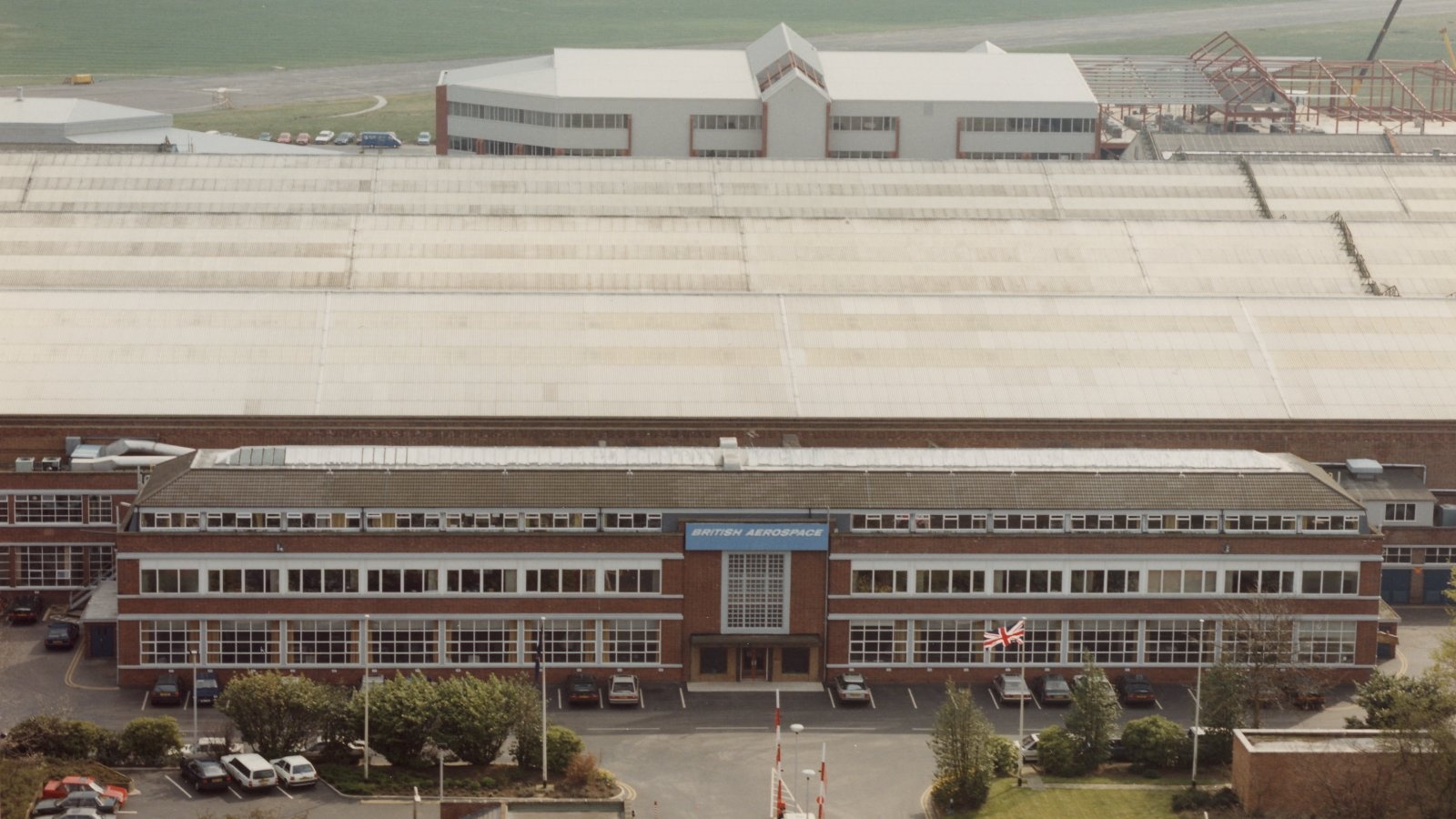 Woodford Main Offices 1990s
Under British Aerospace, Woodford continued with its work on the now BAe146 and this saw the Avro name re-emerge in the Avro RJ Series.
Additional work on the upgrade of the HS801 Nimrod Marine Reconnaissance Fleet continued with conversion Nimrod MR2 airframe to Nimrod MRA4 specification. Work on the project commenced in the late 1990s and Woodford carried out the majority of the adaption and upgrade work.
The £7.7 billion merger of British Aerospace (BAe) and the avionics divisions of Marconi Electronic Systems (MES) in November 1999, saw the aerodrome and factory became known as BAE Systems Woodford.
In 2003, BAE Systems started thinking about closing Woodford when it completed the final part of the Nimrod MRA4 programme. With no further suitable work available, and their withdrawal from the commercial aircraft business, the site was subsequently scheduled to close in 2012, with the termination of 630 staff.
However, the Nimrod MRA4 project fell foul of cost over-runs and further delays due to the extensive modifications needed to accommodate the new power units selected, and the very latest ‘glass cockpit’ technology. A dramatic reduction in the procurement order by the MoD (dropping from 21 to just 9 aircraft) placed further pressure on the continued survival of the site.
The final blow was struck by the 2010 Strategic Defence and Security Review, which announced the cancellation of the entire Nimrod program.

Aerial view of Woodford before closure
On 24th November 2010, 320 sub-contract staff were terminated leaving just 450 permanent staff. A month later it was announced that the site would be closing completely in early 2011.
All production work ended in March 2011, and the site was officially declared closed as an active airfield on 25th August 2011.

Avro Heritage Museum
Today, the 500-acre site is under redevelopment for mixed housing alongside other facilities.  One positive action however, was the establishment of the Avro Heritage Centre. The facility housed in the 'Old Airfield Fire Station' hosts a major collection of Avro related memorabilia as well as boasting numerous aircraft exhibits including the mighty Avro Vulcan XM603 and an Avro Lancaster cockpit section.
It also houses an active and experienced archive section who work enthusiastically to preserve the records and memories of A.V. Roe and his wonderful aircraft company.