As with the majority of Royal Naval vessels, the name Illustrious has been used on numerous occasions between 1789 and 1976, with no fewer than 5 different ships carrying the name.

For the purposes of this web page, we concentrate of HMS Illustrious (87), the lead class aircraft carrier built during the 1930s by our predecessor company, Vickers Armstrongs at Barrow-in-Furness, Cumbria.

The 4th vessel to bear the name HMS Illustrious, was built as the lead ship of the ‘Illustrious class’ of aircraft carriers, built for the Royal Navy and started just before the outbreak of World War II.

In 1936, the Royal Naval Programme called for the construction of two new aircraft carriers and rather than simply modifying the existing configuration being used for the previously unarmoured Ark Royal design, it was decided that these new carriers should be the first to have armoured flight decks.

At that time, it was decided that carriers could never successfully defend themselves by simply deploying their own aircraft, especially without some form of early-warning system allowing them to pre-empt the incoming threat. It was also felt that current carrier designs were extremely vulnerable to attack by land-based aircraft, as they sailed within easy reach of coastal air bases.

The programme also prescribed that new carriers should be capable of protecting their fragile squadrons of aircraft despite sustained attacks – this meant a change in approach and a compromise between a carrier’s offensive potential capabilities against a major increase in its defensive survivability. With the new concept and final designs agreed, HMS Illustrious was laid down as yard number 732 at Barrow on 23rd April 1937. 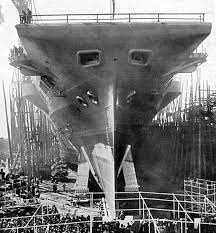 Initial construction at Barrow in Furness suffered with a large number of unwanted delays, mainly created by the slow deliveries of armour plate and other essential materials.
In the main, this was due to the low capacity within the steel industry, which had been severely cut back due to the lack of orders as a direct result of the Washington Naval Treaty, agreed some 15 years earlier.
The treaty had called for surviving ex-World War I ships to be modified and this had almost eliminated orders for new build naval ships.
Such was the shortage of raw materials meant that the flight-deck armour was eventually ordered from The Vítkovice Mining and Iron Corporation, based in Czechoslovakia.

HMS Illustrious was launched on 5th April 1939, where she was christened by Lady Henderson, wife of the recently retired Admiral Sir Reginald Henderson, Third Sea Lord of the Royal Navy. After slipping into the water, she was towed into the Buccleuch Dock at Barrow for fitting out for her complement of around 1,299 officers and enlisted men.

Her three Parsons geared-steam-turbines were supplied by six Admiralty, 3-drum boilers, each driving one turbine shaft. These turbines were designed to produce a total of 111,000 shp (83,000 kW), more than enough to provide a maximum speed of 30 knots (56 km/h; 35 mph). The estimated cost on completion was suggested to be £2,295.00 which did not include any armaments.

The straight-through 753-foot armoured flight deck offered a usable length of 620 feet, due to prominent ‘round-downs’ at each end. These would offset the effect of air turbulence, experienced by landing aircraft, and caused by the carrier's upper command structure or ‘Island’. The flight deck measured just 95 feet in width, with a single hydraulic catapult recessed into the forward section. 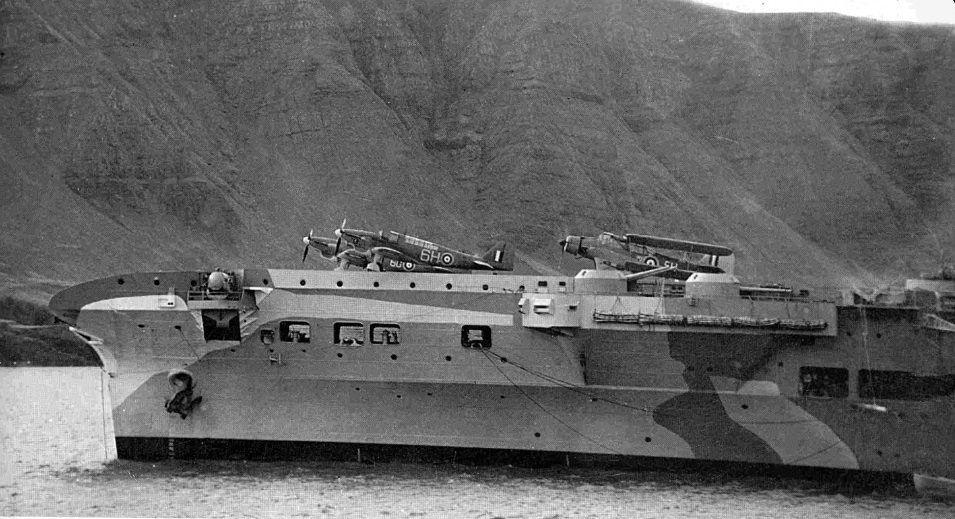 HMS Illustrious 'Round Downs' on leading edges of flight deck

In the centre, two lifts raised and lowered aircraft from the armoured hangar, set directly beneath the flight deck and where up to 36 aeroplanes could be stored. The hangar was one of the most dangerous parts of any carrier and HMS Illustrious carried some 50,650 imperial gallons of aviation fuel, stored in tanks at either end of the hangar. 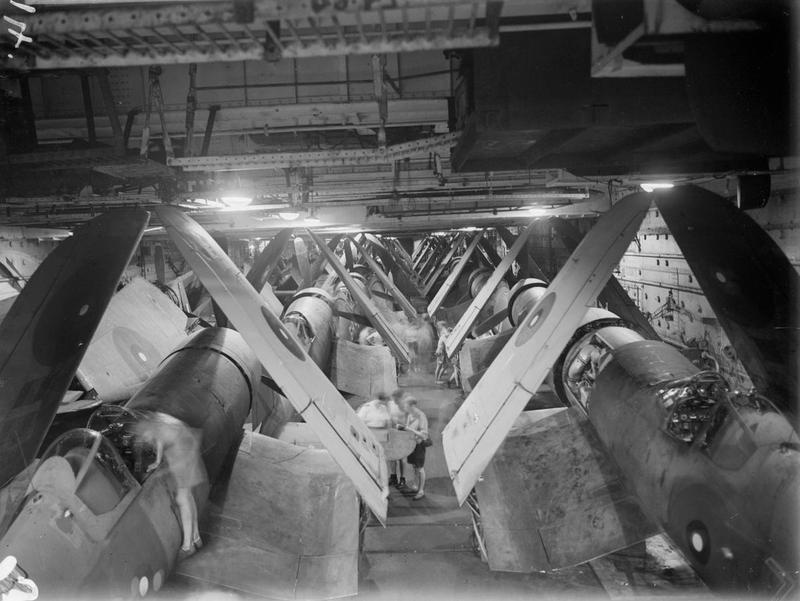 HMS Illustrious aircraft hangar below flight deck
To maximise the protection of the hangar, the hangar floor was constructed of 2.5 inches (64 mm) thick armour plate which extended the full width of the ship to meet the top of the 4.5-inch plated armour belt at the waterline. Below the waterline, she featured an underwater defence provision comprising of a layered system of liquid and air-filled compartments, backed by a 1.5-inch splinter bulkhead.

The ships armament comprised of sixteen quick-firing 4.5-inch dual-purpose guns, with light anti-aircraft defences including six QF 2-pounder (‘pom-pom’) guns. The final completion of the was delayed by over two months in order to instal a new Marconi Type 79Z early warning radar, making HMS Illustrious the first aircraft carrier in the world to be fitted with radar before completion.

She entered Royal Naval service on 24th April 1940, under the command of Captain Denis Boyd, and embarked on her sea trials within a month. Sadly, her exact speeds were never recorded as she had her paravanes streamed throughout although estimates suggest that she could have made about 31 knots (57 km/h; 36 mph) under full power. During the sea trials she carried a maximum of 4,850 long tons of fuel oil, giving her an estimated maximum range of approximately 10,700 nautical miles at 10 knots, although this range reduced dramatically as speed increased.

Her first assignment after the completion of the sea acceptance trials was working with the Mediterranean Fleet, in which her on-board aircraft’s most notable achievement was sinking one Italian battleship and damaging two others during the Battle of Taranto in late 1940.

Two months later, HMS Illustrious suffered substantial damage when she was attacked and crippled by German dive bombers. Such was the extent of her wounds that she was sailed to the safety of the United States for repair. Having been restored, she was further damaged whilst on the voyage home in late 1941 when in a bizarre incident she collided with her sister ship HMS Formidable.

Whilst she had been under repair in the USA, her rear flight deck ‘round downs’ were flattened, increasing the useable length to 670 feet. This additional 50 feet allowed for the provision of a quick reaction deck park for a further 6 aircraft. This increased both her aircraft capacity and her defensive capability alongside and increase in her light anti-aircraft armament which was increased with 10 Oerlikon 20 mm auto cannon. 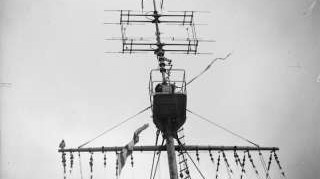 Once back in the UK, HMS Illustrious also received a major radar upgrade (to the Marconi Type 281 system seen left).
In order to operate all of these enhancements, the ships compliment was also raised to 1,326.
Now back in action and fully operational, HMS Illustrious was sent to the Indian Ocean in early 1942, in support of the invasion of Vichy-French Madagascar.
She returned home once more and in early 1943, she underwent yet another lengthy refit, before being briefly assigned to the Home Fleet.  Within just a few months of completion, she joined ‘Force H’ at the Battle of Salerno (mid-1943) before re-joining the Eastern Fleet on duty in the Indian Ocean. 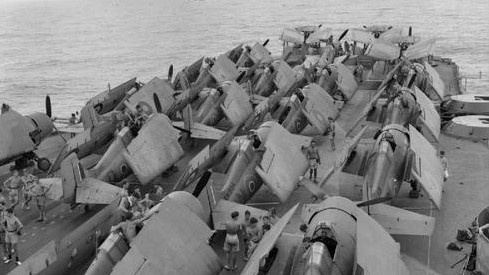 A busy flight deck in the Indian Ocean with Grumman Martlets, Fairey Fulmars and Fairey Swordfish
HMS Illustrious was frequently criticised for being ‘severely overcrowded’, at one point carrying a total crew of 1,997. This was considered untenable by naval planners and so after a quick refit in Birkenhead, the ships complement was reduced back down to 1,090 officers and enlisted men.

In early 1944, aircraft from HMS Illustrious carried out numerous attacks on the Japanese-occupied Dutch East Indies as part of the Eastern Fleet, before being transferred to the newly formed British Pacific Fleet (BPF). She then played a significant role in the early stages of the Battle of Okinawa until mechanical defects and battle damage resulted in her being ordered home once more for repairs in May 1945.

Whilst she was in the dockyard, World War II came to an end after the dropping of the atomic bombs at Hiroshima and Nagasaki. This resulted in a dramatic change for the vessel when it was decided to modify her for use as a Home Fleet Trials and Training carrier, alongside further naval duties.

Away from any legacy conflicts, HMS Illustrious was selected to host a series of deck-landing trials across a whole range of British post-war naval aircraft. Occasionally, she was also called upon to ferry troops and allied aircraft, to and from foreign training deployments, as well as playing major roles in Naval and Air Force exercises around the world. 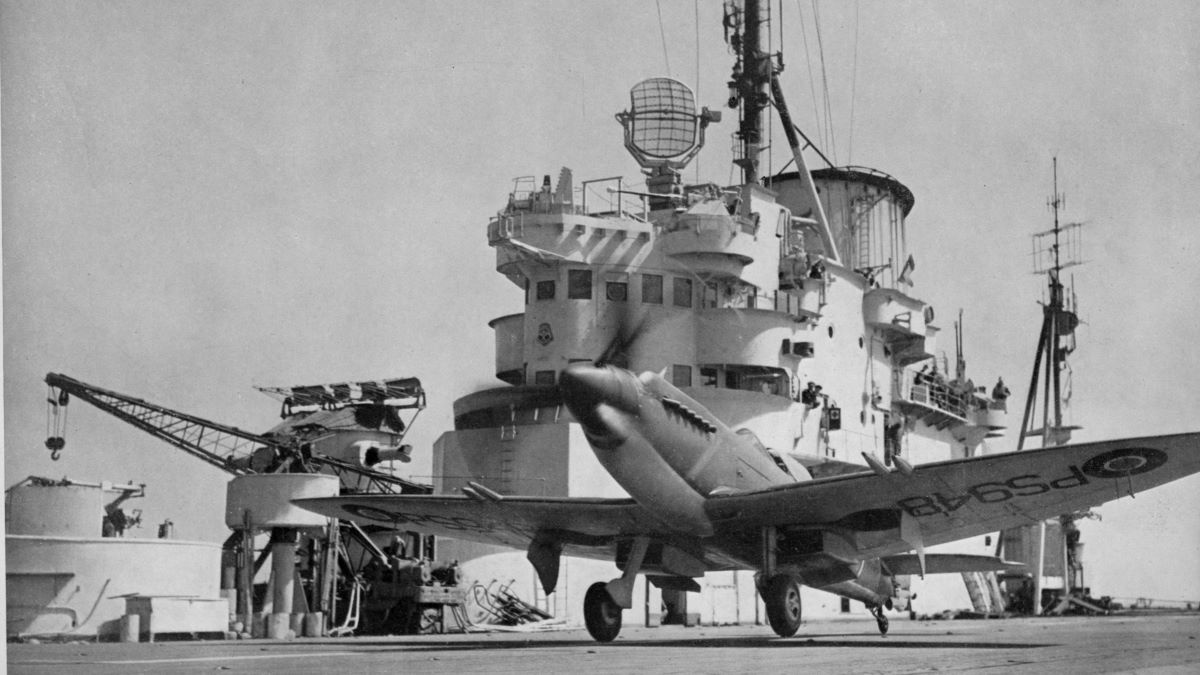 Vickers Supermarine Seafire deck landing trials on HMS Illustrious
During 1951, it is recorded that she transported troops to the eastern Mediterranean Sea to quell rioting in Cyprus, after the collapse of the Anglo-Egyptian treaty.

She conducted her last landings on 3rd December 1953 arriving at Devonport four days later to begin decommissioning. In a career worthy of her name, Illustrious was home to 18 different Squadrons carrying aircraft ranging from the Hawker Sea Fury to the Vought F4U Corsair.

HMS Illustrious was finally paid off at the end of February 1955, where after she was towed to Gairloch in Scotland and placed in reserve. She was eventually sold for scrap on 3rd November 1956 and was unceremoniously broken up at Faslane in early 1957.