Our Company Heritage Glascoed, Usk
Glascoed, at the very heart of the UK Munitions Industry
The BAE Systems Glascoed facility sits amidst rolling hills of Monmouthshire, between Pontypool and the market town of Usk. This is an area where King Arthur ruled, Romans bathed, Normans set up home and pilgrims came to worship.
Today it is still as busy as ever, providing employment for around 500 people, largely from the local area.
At BAE Systems Glascoed, we promote apprenticeships in local schools and colleges whilst encouraging arranged visits to our Heritage Centre, which helps to tell the story of the site and those men and women who have worked there.

Respirator Assembly
The original factory was conceived as part of a British Government plan to re-arm its military forces in readiness for World War 2. It was part of a program that eventually saw a total of over forty manufacturing sites known as the Royal Ordnance Factories (ROF's) contributing arms and ammunition to the war effort.

Most of these were brand new but they also included the existing factories at Woolwich, Waltham Abbey, Enfield, Hereford, Birtley and Pembrey. Factories were categorised into three types:-
The site at Glascoed was was chosen in preference to another area in Carmarthenshire, for the construction of a filling factory. It was ideal as its seclusion and sheltered topography protected it from surprise and accurate bombing, whilst its damp 'micro-climate' was highly desirable for the handling of dangerous and often unpredictable explosives.
As the ‘Senior Service’, the Royal Navy had wanted an ammunition filling factory of their own, based near their storage facilities at Milford Haven. Glascoed was chosen as there was a plentiful supply of industrial labour readily available from the depressed mining valleys nearby, and who had suffered many years of unemployment after the Great Depression in the 1930s.
Construction of the factory at Glascoed commenced in 1938, sited on compulsorily purchased farmland. The design and layout was based on the well-established principles that had been devised and developed by the Royal Arsenal at Woolwich. 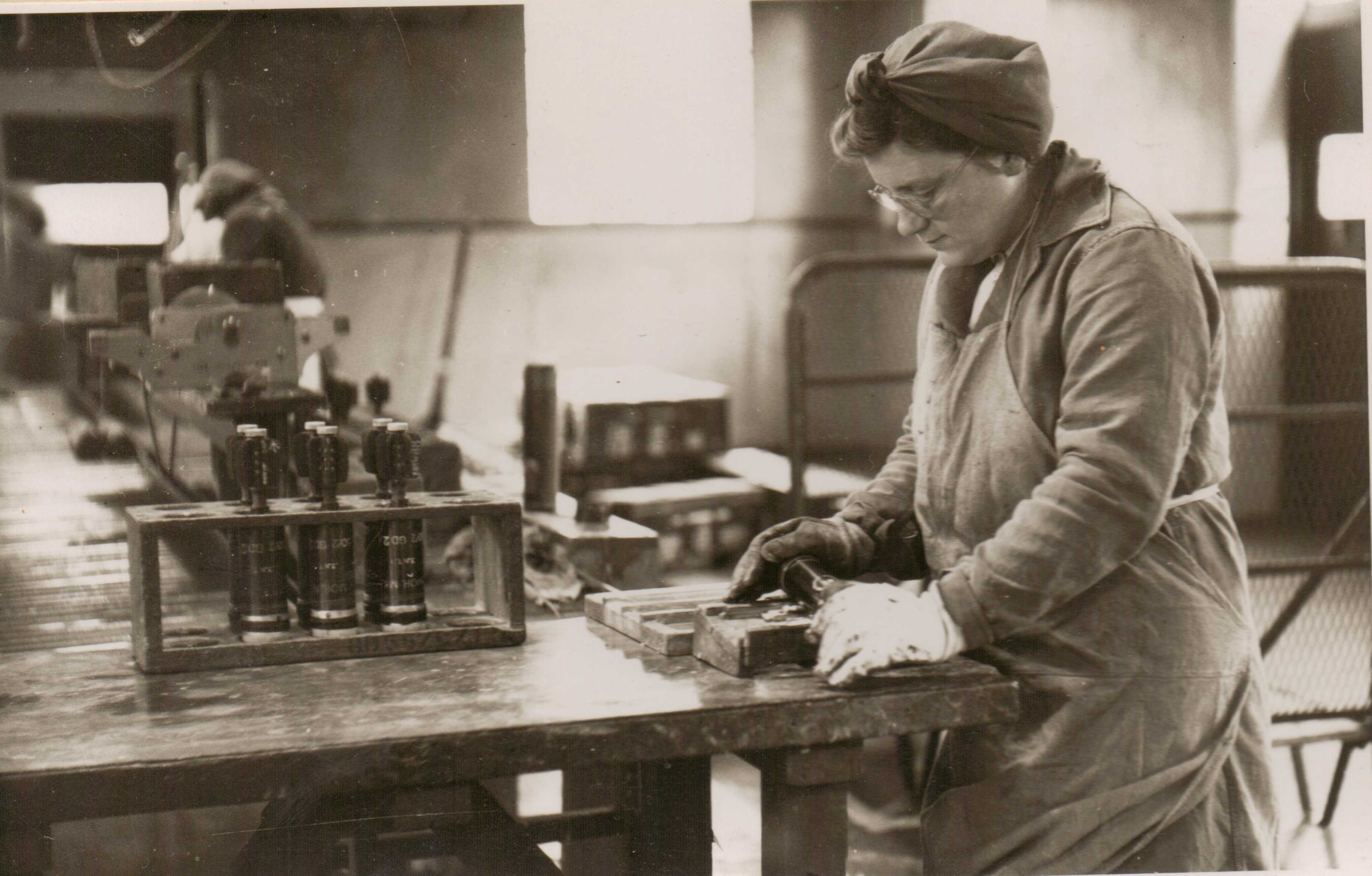 2 inch Mortar Bomb Stencilling
A workforce of several thousand were quickly hired to undertake the construction work on the 1,000 acre site which featured dedicated production areas planned for high explosive filling, propellant charge manufacturing and pyrotechnics processing.
Safety was paramount from the outset and this can be seen through the planned layout of the various buildings (with extremely thick walls), which were spread throughout a pattern of wide, open spaces among 20-foot high grassed embankments, all designed to deflect energy upwards in the event of accidents.
Full support facilities were catered for with component manufacturing facilities and the provision of a number of large storage magazines. Two railway stations and bus facilities were built to convey the workforce from neighbouring towns and cities.
In late 1939, a team of specialists were sent to Glascoed from the Arsenal at Woolwich, headed by Mr F.W. Murphy. Their task was to train the new workforce in the skilled processes and techniques of ammunition filling and assembly, with a close concentration on safety. In fact, Murphy enjoyed his time so much on the Welsh borders that he was to remain as Factory Superintendent for the duration of the war with many of his team also staying on at Glascoed until reaching their retirement.
The first shell filling was completed on 31st of March 1940 upon which the factory declared ‘operational’.
One local landmark to suffer during the same period as the construction however, was The Folly Tower, high up on the hills above Pontypool.

Sadly, the Tower had to be demolished as it was seen as an 'intricate and easy navigational point' for visiting German bombers, sent to mount attacks on the factory.
Despite this precaution however, in July and October 1940, the factory was attacked by the Luftwaffe. During the raids a number of workmen, working within the Charges Section, were badly injured with one killed during the second of the raids.
However, later examination of the German air raid debrief notes revealed that the crew involved reported that they had bombed the aircraft factory at Filton, some 40-miles away and the other side of the Bristol estuary.
Thankfully, the Tower was rebuilt as a tourist attraction in 1994.
In 1942, a new product section called the 'Heavy Bomb Unit' was opened and for the remainder of the war it produced many hundreds of 2,000lb HC (High Charge to weight ratio) bombs for the RAF, who referred to them as ‘Cookies’. 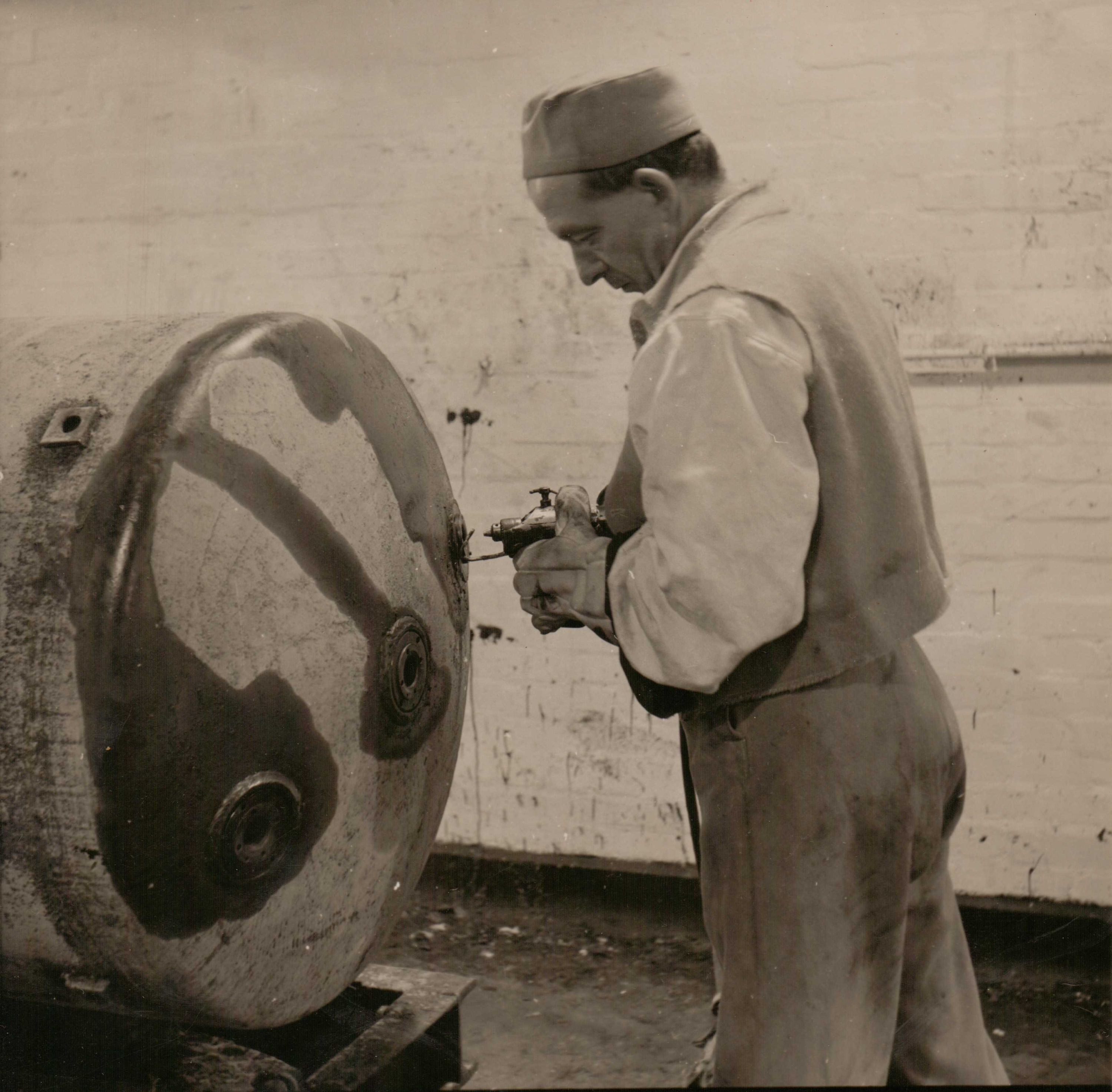 Fitting fuses to a 4000lb 'Cookie' bomb 1944
During 1943, production activity peaked among the 700 separate buildings and the factory was producing ammunition for all three services with a workforce in excess of 12,000 spread over three shifts. A small housing estate was created nearby to accommodate management and staff who were crucial in emergency responses to urgent requirements.
Products include various types of aircraft bombs, naval ammunition from 3” to 15” calibre, torpedo warheads, depth charges, 25 pounders, 2 pounders and 40 mm shells. Glascoed was also responsible for filling the highball bouncing bombs designed by Barnes Wallis intended for use against the German Battleship Turpitz, although these were never used.
With the end of hostilities in 1945, the Glascoed was initially engaged on the demilitarisation of large volumes of now unwanted ammunition although despite this alternative activity, it did little to offset the downturn in military requirements and the workforce was reduced to about 25% of its peak level.
Further diversified work was eventually secured in the late 1940s with the manufacture of sectionalised concrete houses (Airey houses), concrete railway sleepers and refurbishment of ‘Jerry’ cans.

Airey House manufacturing at Glascoed 1949
By the 1950s, the level of work had stabilised and the factory continued making reasonable volumes of the products that it had produced during WWII.
The British military were still engaged in a number of conflicts around the world such as Korea, Suez and Malaya - there had also been an increase in the volume of ammunition required for National Service training. That said, the demand for traditional weapons and munitions continued to decline to such a point that many of the Royal Ordnance Factories started to close around the UK.
At Glascoed, the 1960s introduced a gradual development of the filling and assembly processes required during the manufacture of more technically sophisticated ammunitions. The growing hostilities evident in the Cold War also increased the range of work being carried out at Glascoed, which by now included munitions for field guns such as Howitzer, and for battle tanks and armoured fighting vehicles.

Assembling Tank Ammunition
Meanwhile, the factory infrastructure itself went through various upgrades and saw the introduction of its first 'mainframe' computer. This was so big that it filled a large office and employed two full-time staff to feed it data. Its task..... to handle the payroll for the Glascoed workforce, numbering less than 2,000.
However, more improved and important technology was later directed at the factory boiler houses, which provided the steam for heating buildings and used in the melting of explosives etc. Originally, these were housed in two buildings, each accommodating six coal-fired boilers. Eventually however, one set was converted to fuel oil providing a greater efficiency. This immediately reduced the operating and maintenance costs to such a point that the second boiler house was permanently closed.
The upgrading of the factory continued in many areas throughout the 1970s and 1980s, and much of the old WWII plant and equipment was replaced with new. Some of the traditional processes were found too difficult to improve upon and so these remained maintained with the basic plant configuration untouched. The filling of aircraft bombs and torpedo warheads was one such example of this.
The ammunition produced during this period included the 105mm tank for export, 120 mm tank for Chieftain (and subsequently Challenger), 105 mm field for the Light Gun, 76 mm for Scorpion Light Tank and also the 'Tigerfish' and 'Spearfish' torpedo warheads, plus 540lb and 1,000lb bombs for the RAF.
Arguably, Glascoed’s most successful product has been the 81mm Mortar Bomb. This was first produced at the factory during 1963 and it has been in almost continuous production ever since - a unique achievement in the Glascoed product range.

81 mm Mortar Bomb Filling
The Glascoed factory was privatised in the mid-1980s as part of the Ordnance Factories and Military Services Act 1984, the most significant change to the factory in its 46 year history. Originally privatised with shares held by the Secretary of State for Defence, Royal Ordnance was subsequently sold to British Aerospace in 1987.
The business had begun an efficiency and rationalisation drive in the lead up to privatisation, but this activity was accelerated in an attempt to make a previously ‘break-even’ business competitive in the world market. Much was achieved at Glascoed to reduce operating costs and in 1994, the business decided to consolidate down one ammunition filling factory. After much debate and comparison, Glascoed was chosen and much of the manufacturing capability from the likes of the Chorley factory was moved to Glascoed.
The merger of Marconi Electronics Systems with British Aerospace in 2000 resulted in a new business entitled BAE Systems.
Within this new organisation, Glascoed was placed in a newly created business unit simply called RO Defence. This was later reorganised to create BAE Land Systems Global Combat Systems whilst the three remaining ROFs became the sub-group BAE Global Combat Systems Munitions
In August 2008, BAE Land Systems signed a £2 billion contract with the UK Ministry of Defence (MOD), which will guarantee secure supplies of ammunition to UK troops. The arrangement is known as ‘Munitions Acquisition – the Supply Solution (MASS)’.
It is initially for a 15-year period and will supply approximately 80 per cent of the ‘general munitions’ consumed by UK Armed Forces for training and for front line operations, This includes small arms and medium-calibre ammunition, mortar bombs, tank ammunition and artillery shells. Part of the arrangement provided by this contract is a company-funded programme of £34M to transform the business at Glascoed. Improvements to its manufacturing facilities and infrastructure will also introduce best practice methods and processes generating increased efficiency.
As it celebrated its 80th anniversary in March 2020, Glascoed looks forward to a period of stability whilst matching up to the challenges of producing continuously improved value for money products.
Click here for a fascinating further look at the at the history of Glascoed.