Our Company Heritage Bristol 167 Brabazon
Britain's 'Jumbo' airliner - years ahead of its time. 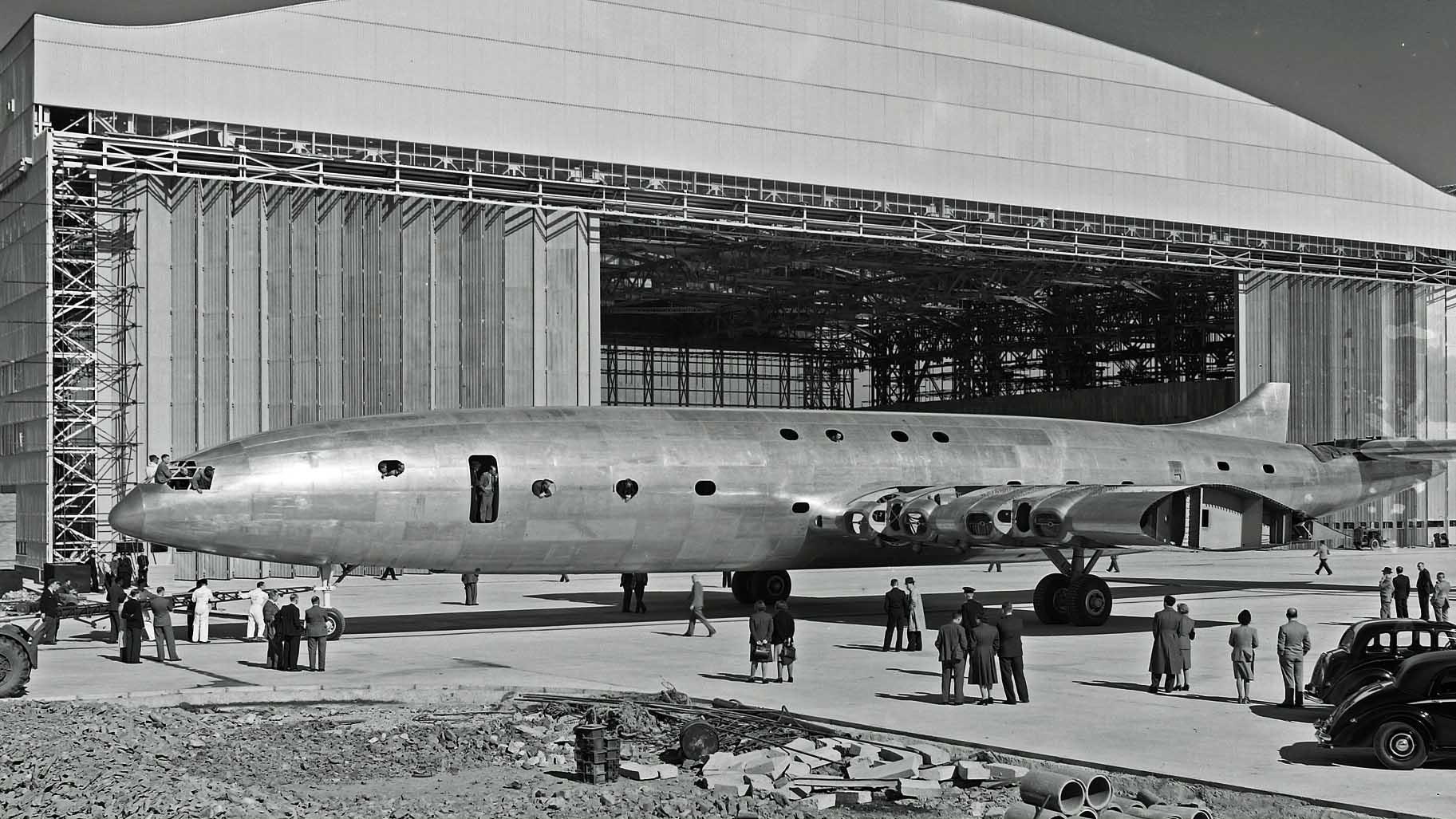 Bristol Brabazon fuselage outside the Brabazon hangar at Filton 1947

With UK aircraft production solely concentrated of military requirements during World War II, the provision for the production of transport aircraft was the province of the American allies, who produced such notable designs as the DC-3, DC-4 and C-69 Constellation.

With the coming of peace, this left Britain with no modern commercial aircraft either in production or at the design stage other than the simple conversion of military transport aircraft.

Nevertheless, a committee (under Lord Brabazon of Tara) set out the specifications for a number of civil transport types and delivered a report now known as the 'Brabazon Report' calling for the production of aircraft in 4 design configurations;

Bristol Aeroplane Company had already gained experience in the design of heavy bombers during the 1930's although the war had diverted its attention into the production of multi-role such as the Beaufort Torpedo Bomber.

Following the publication of the report it embarked on the most ambitious of the categories (Type 1) calling for a trans-Atlantic airliner - the design that was to emerge was the Bristol Type 167 Brabazon I.

It was considered at the time that the more wealthy passenger would consider air travel over lengthy sea voyages if the experience was made significantly more comfortable and a key feature of the design, apart from its unprecedented size, was the use of eight engines buried in the wings, coupled in pairs driving four sets of contra-rotating propellers to give a very low noise level in the passenger cabin.

Another design feature, which reflected a view that only those with deep pockets and accustomed to comfort were likely to fly across the Atlantic, was the generous space provided for the passengers. This huge aircraft was initially designed around the carriage of 96 day passengers, or 52 in sleeping compartments and included bars, walkways and even a cinema. 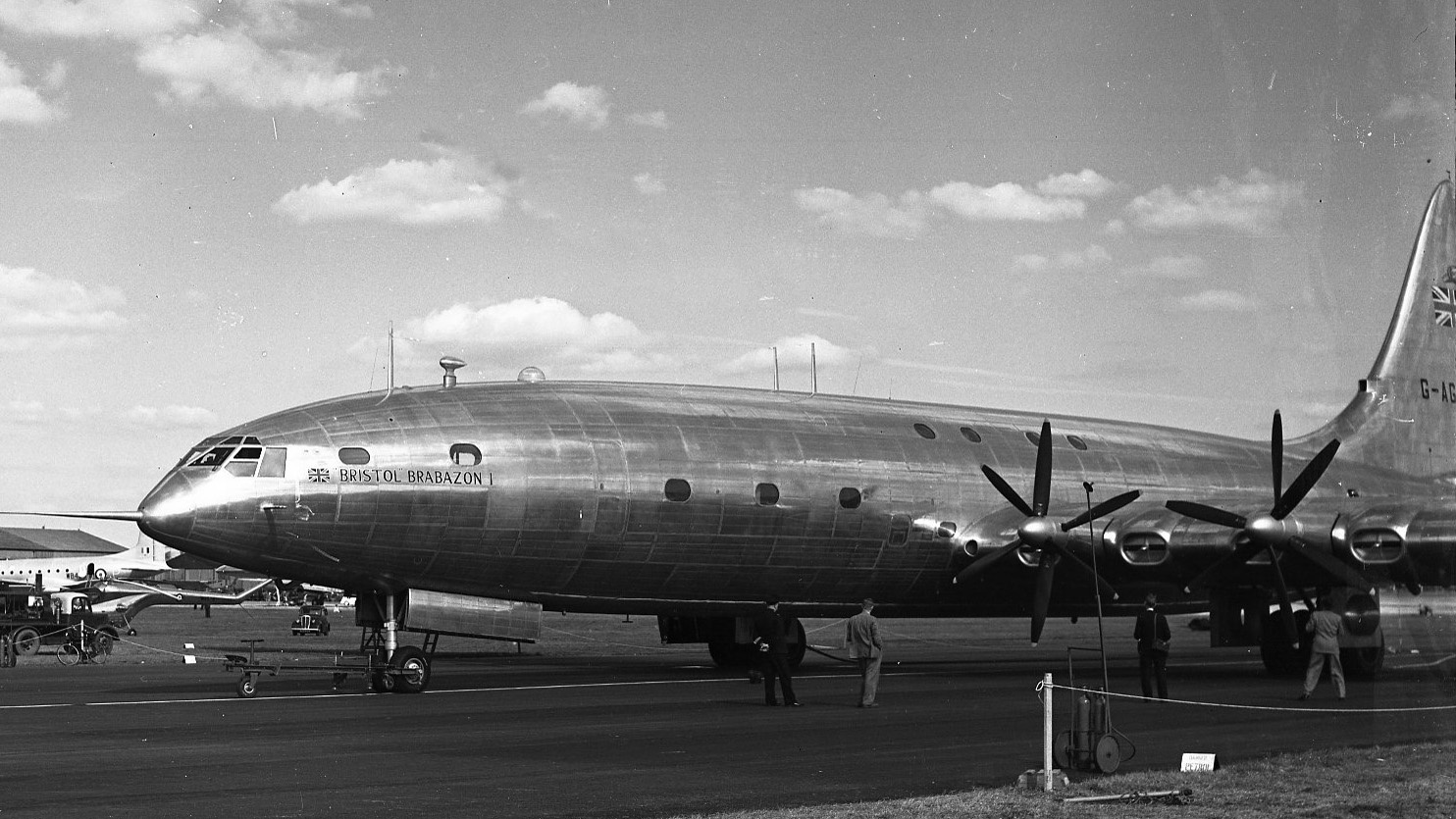 Nowadays it is difficult to appreciate the sheer size of the Bristol 167 Brabazon - a tailplane span of 75 ft perhaps speaks volumes, as much as the 230 ft wingspan (19 ft greater than a Boeing 747-400). The undercarriage track was 55 ft (the undercarriage development requiring the assistance of its own Avro Lincoln test aircraft!).

One lasting legacy of the huge dimensions is the 7½ acre Brabazon Assembly Hall, still in use at Filton and 1,052 ft long, 410 ft maximum width, and 117 ft high!

Work on strengthening and extending the runway to a length of 2,750 yards to meet the needs of the mighty Bristol 167 Brabazon began in March 1946. One regrettable effect of the expansion was the total destruction of the village of Charlton, which lay to the west of Filton, directly in line with the runway.

The sole prototype (G-AGPW) was flown for the first time by A.J. (Bill) Pegg at Filton on 2nd September 1949, fitted out with test equipment rather than passenger seats. To the surprise of some sceptics, the Brabazon proved easy to fly, and to manoeuvre on the ground. 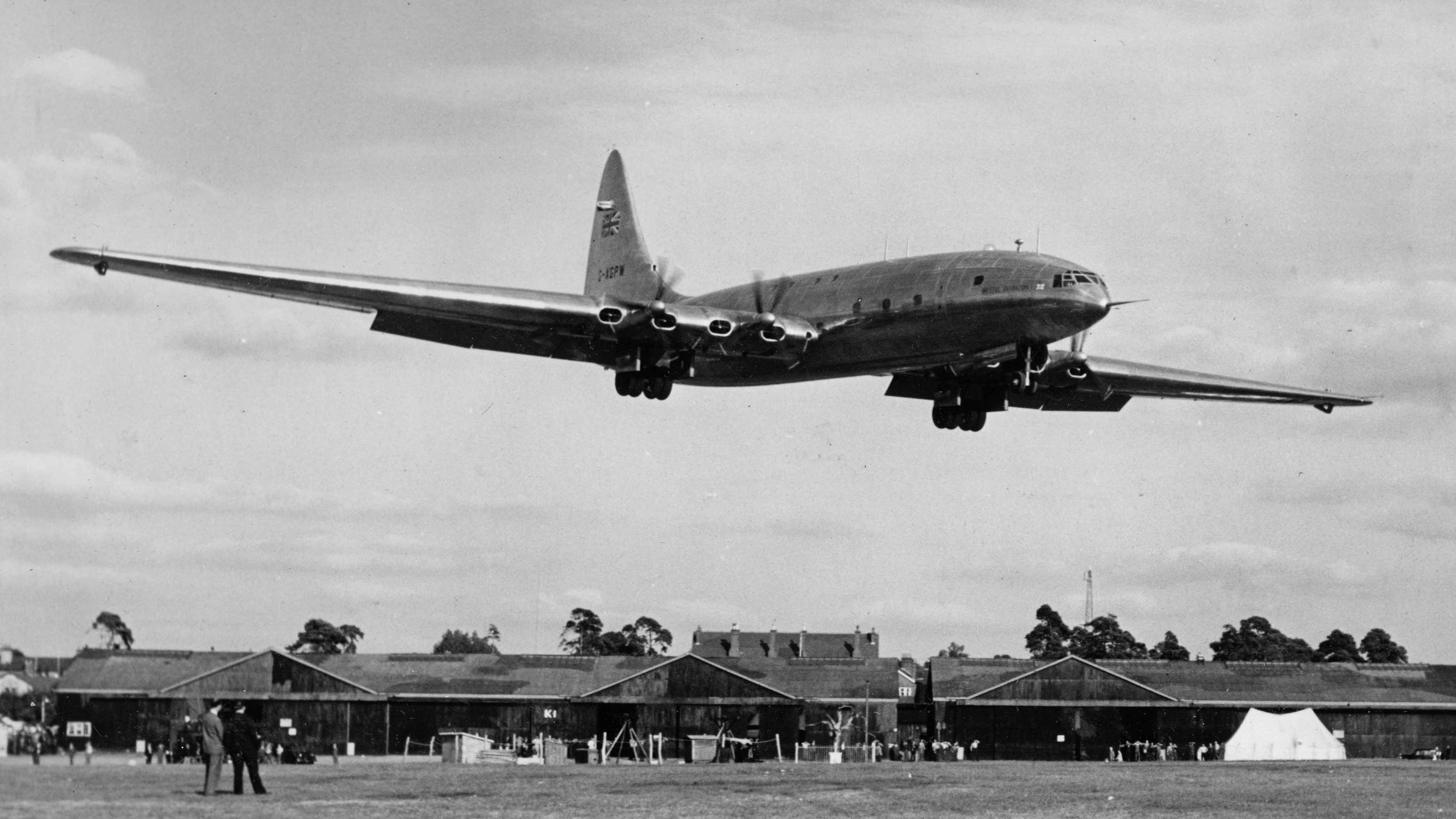 4 days after its maiden flight, the Bristol 167 Brabazon appeared at the SBAC Show at Farnborough before embarking on its test programme.  It returned to Farnborough in 1950, after visiting Heathrow Airport for a succession of take-offs and landings.

In 1951, it demonstrated at the Paris Air Show and although it created significant intrigue, its expected launch customer BOAC had by now lost interest in the type.  Despite this, BEA had expressed interest in acquiring the flying prototype for commercial use, but sadly it was never granted a full airworthiness certificate.

A Bristol Brabazon I Mk II variant was schemed, around four double Proteus engines and although construction began, this aircraft was never completed for flight.

By 1952, expenditure was estimated to be around £3.4 million and yet there were still no signs that the market predicted by the Brabazon report would materialise.

By 1953, the costs had escalated even further to £6 million and with another £2 million needed to complete the Brabazon Mk II prototype, the Ministry of Supply announced the cancellation of the project.  The prototype was broken up in October 1953, after only 400 flying hours, in part due to an inadequate projected fatigue life.

Despite the Bristol 167 Brabazon being often thought of as a 'White Elephant', much of the expenditure was on the creation of an infrastructure, especially to build and support large aircraft production after the war.  One direct beneficiary of the work instigated by the Brabazon was the enormous production facilities for the Bristol Britannia.

Later developments also fully justified the development of very large commercial aircraft for long range passenger flight, albeit with considerably more passengers and less space than was offered by the Brabazon.

It is also thought that as a result of the Bristol 167 Brabazon,  Filton along with its sister facility at Broughton (Cheshire), became synonymous with the science involved in the wing technology. This has been continued through Airbus and in particular, their A380 which is the largest passenger carrying aircraft in the world.