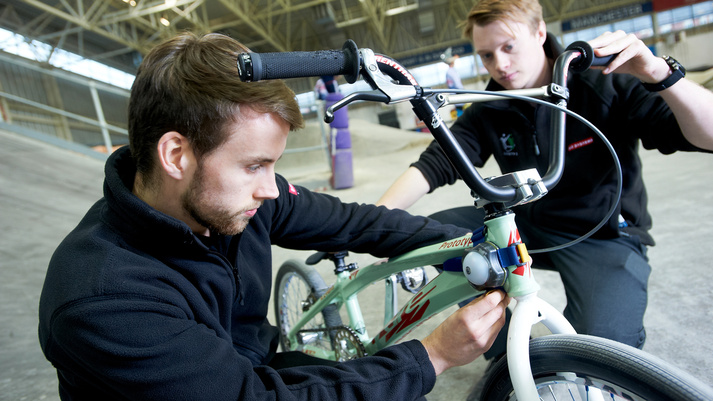 The Great Britain Cycling Team’s BMX riders are benefitting from ground-breaking aerospace technology developed by BAE Systems, to stay ahead of the competition

As part of the eight year research and innovation partnership with UK Sport, engineers at BAE Systems are working with the Great Britain Cycling Team’s BMX squad to adapt hardware previously used in unmanned aircraft trials to improve riders’ performance.

To shave vital milliseconds from the BMX team’s race times, the project utilises cutting edge optical sensor technology originally developed for the ‘sense and avoidance’ system from a leading unmanned aircraft technology demonstrator.  The sensors interact with miniature LEDs affixed to the BMX bikes to track the trajectory of the riders while on the ground and, critically, in the air.  This information is then relayed to a specially designed app, giving riders and coaches a real-time read-out of performance, enabling them to identify where they can make those critical marginal gains.

Speaking at the Great Britain Cycling Team’s BMX training session Liam Phillips, British BMX rider, said "In an elite sport such as BMX, where riders are travelling around 40kph and spending more than 40% of the race in the air, every milliseconds counts and one imperfection for your form can put you at a disadvantage. This new technology from BAE Systems will revolutionise the way we train, allowing us to analyse our techniques with a new-found precision and helping us shave off those valuable fractions of a second."

Kelvin Davies, BAE Systems' former Technology Partnership lead said: “We are excited to see how this cutting-edge sensory hardware is able to influence the race strategy of the Great Britain Cycling Team’s BMX squad. Technology and innovation is at the heart of BAE Systems and we are proud of the contribution we make to help our athletes in their pursuit of marginal gains”.

Simon Timson, Director of Performance at UK Sport, said: “Medals will be hard won in Rio next year, but access to BAE Systems’ expertise, where their forward thinking engineers are applying cutting edge technology to improve our athletes’ training and performance, will prove invaluable. The UK’s athletes and their coaches are working hard to make the nation proud in Rio, as they did in London, and it’s fantastic to have the best of British engineering, thanks to BAE Systems, backing them all the way.”

BAE Systems is currently working with UK Sport, and their science, medicine and technology arm, the English Institute of Sport, as their Official Research and Innovation Partner – helping to support British sports and athletes ahead of major competitions such as Rio 2016.

In August 2013, the Company – which employs 18,000 engineers – announced the beginning of the second phase of this partnership which has already benefitted more than 20 different Olympic and Paralympic sports and 140 athletes since its conception in 2008.