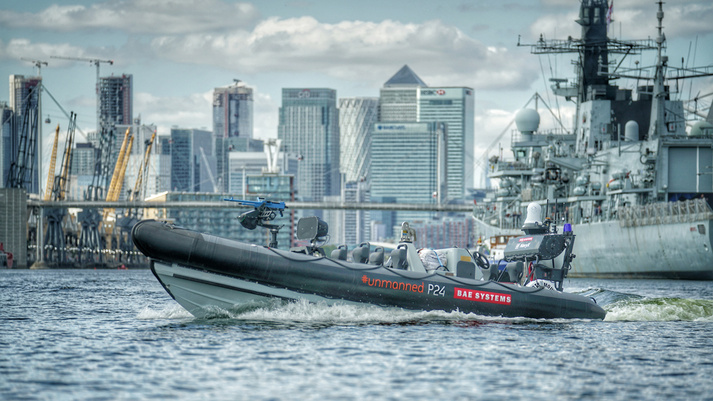 At a time of increased threat to international shipping, BAE Systems will this week demonstrate for the first time how Unmanned Surface Vessels (USVs) can be fully integrated with operational Royal Navy warships to extend their reach beyond the horizon and reduce sailors’ exposure to danger.
An unmanned Pacific 24 Rigid Inflatable Boat (P24 RIB) will be integrated with the combat system of HMS Argyll, a Type 23 frigate, in a series of waterborne demonstrations in London’s Docklands at DSEI 2019, the international defence and security event.
At 7.8 metres long, the P24 RIB has a speed of 38 knots and can operate for up to 45 hours at patrol speed or 100 nautical miles in pursuit mode, while being controlled remotely or operating autonomously. Its integration with an active warship has potential applications across a range of missions, including anti-piracy operations, border control, intelligence gathering, maritime security and force protection.
At the show, technologists from BAE Systems, in collaboration with the Royal Navy, Dstl and autonomous systems supplier L3Harris, will demonstrate the potential to make naval missions faster, easier and safer by carrying out high-speed exercises that mimic real world scenarios that include force protection, threat intercept and chase missions.
The P24 RIB, designed and built by BAE Systems, is the standard sea boat for the Royal Navy and is used widely across its surface fleet. It is also used extensively by the Royal Marines, Royal Fleet Auxiliary, Ministry of Defence Police and by allied navies and by overseas security forces. The new autonomous capability has the potential to be retrofitted to existing P24 RIBs.
A key part of proving the technology for future operational use has been to ensure a secure connection between the combat management and sensor system on board the warship and the off-board systems on the RIB.
Early trials of the technology have been conducted in collaboration with the Royal Navy’s new autonomy and lethality accelerator programme, Navy X.

“This is much more than an Unmanned Surface Vessel demonstration for the Royal Navy. What we are doing is the first step in exploiting system architecture in a complex warship to integrate an unmanned system into the ship. This ensures the system and its payload fully contribute to the warfighting capability of the ship.
“Ultimately this will change the way we fight – through integrated command and control – and lead to development of new tactics, techniques and procedures. The P24 RIB is well known to the Royal Navy and has a lot of potential in terms of its payload and deployment as an unmanned system. The Royal Navy is excited at the prospect of developing this capability.”

“This technology represents a huge step forward in the interaction between human and machine, combining sophisticated autonomous technology with human capabilities to overcome many of the challenges faced in difficult conditions at sea.”
The version of the autonomous P24 RIB on show at DSEI has been modified for optional unmanned operation and fitted with additional sensors and effectors including a high-resolution optical and thermal camera and Long Range Acoustic Device (LRAD) system, capable of emitting warning messages at distance. It is also equipped with automated navigational decision-making technologies, freeing up operators to focus on mission critical information from afar.
The P24 has pre-programmed intelligent behaviours to position itself appropriately in relation to a potential threat. However, its planned weapons system, developed by MSI Systems with BAE Systems, remains firmly under a human operator’s control, ensuring that while the vessel can operate and navigate autonomously, there will always be a highly-trained operator, making the final decision on engagement and targeting.
For the past four years we have been working in collaboration to develop this ‘first of its kind’ technology. We are proud to have matured autonomous maritime technology significantly, positioning the UK as a forward thinker in this unique space and providing a crucial advantage where it counts.

, Chief Technologist, BAE Systems Maritime Services.
The demonstrations highlight the collaborative effort of industry working alongside Dstl partners in supporting the future of the Royal Navy, and the advancement of technology in providing non-lethal and lethal advantage to our military forces.
First introduced on an experimental basis in 2015 and trialled as part of the Royal Navy’s Unmanned Warrior exercise in 2016, BAE Systems is working with the Ministry of Defence to continue a series of capability demonstrations, including NATO trials, designed to further test the integration of the technology with existing warship combat management systems trials and its planned weapons systems.
Woods added: “For the past four years we have been working in collaboration to develop this ‘first of its kind’ technology. We are proud to have matured autonomous maritime technology significantly, positioning the UK as a forward thinker in this unique space and providing a crucial advantage where it counts.”
Contact