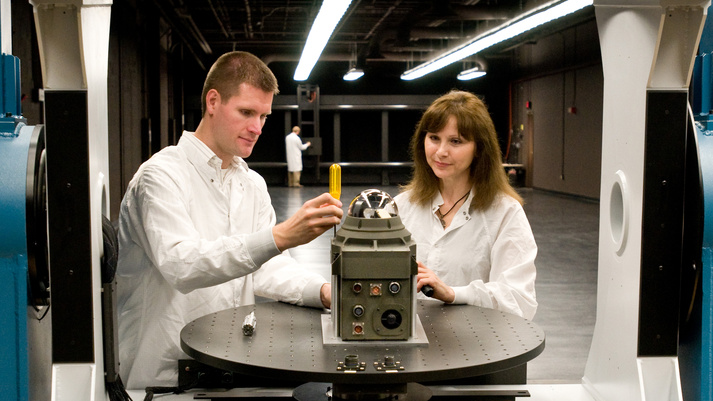 This new facility is part of a three-year, $70 million investment in developing state-of-the-art manufacturing and systems engineering facilities for integrated aircraft survivability equipment.

The Worrell/Weeks Aircrew Protection Center is dedicated in memory of Major Matthew Wade Worrell and Chief Warrant Officer 5 Jamie Dunbar Weeks, U.S. Army special operations soldiers who were killed in action when their helicopter was shot down by enemy fire during combat operations in Iraq in May 2006. The two soldiers were members of the 1st Battalion, 160th Special Operations Aviation Regiment, known as the Night Stalkers, which is based at Fort Campbell, Kentucky.

Helicopters and the troops they carry must contend with a growing array of threats over the modern battlefield, particularly infrared-guided missiles and unguided munitions. Since these threats can strike their targets within seconds, defensive countermeasure systems must be able to instantly sense and respond to the threat.

The new facility allows missile warning and hostile fire detection systems to be tested under demanding conditions that simulate the actual temperature, vibration, and motion characteristics of flight. In addition, the facility is equipped with two independent flight motion simulators; a two-axis gantry that simulates movable threats; an indoor and outdoor test range; and electro-optic/infrared, software, and multi-spectral labs - all co-located to allow for faster development and testing.

"We are honored to dedicate the Worrell/Weeks Aircrew Protection Center in the memory of these soldiers who gave their all in our defense," said Jim Crouch, vice president and general manager of BAE Systems' Survivability & Protection Solutions business. "We're motivated every day to protect those who protect us. The work we will do here will help us fulfill that important mission."

BAE Systems is a global defense, security and aerospace company with approximately 107,000 employees worldwide. The Company delivers a full range of products and services for air, land and naval forces, as well as advanced electronics, security, information technology solutions and customer support services. In 2009 BAE Systems reported sales of £22.4 billion (US$ 36.2 billion).