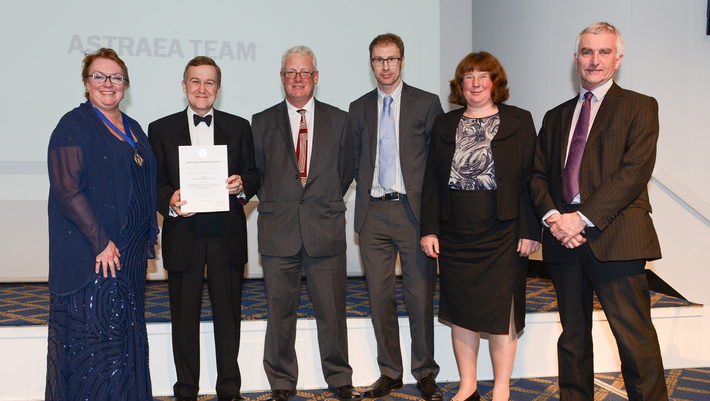 A pioneering project aimed at getting unmanned aircraft operating safely has received an award in recognition of its contribution to aerospace.

The ASTRAEA programme collected the Team Silver Award at the Royal Aeronautical Society’s annual awards, which are among the most prestigious prizes in the industry, held in London.

About the programme
The programme team, made up of a number of Britain’s leading aerospace firms, has spent the past eight years working to open UK air space for unmanned aircraft to operate, culminating in a flight from our site in Warton, Lancashire, to Inverness, Scotland earlier this year.

That flight saw a Jetstream aircraft fly as a surrogate unmanned air system through both controlled and uncontrolled air space, under the control of a ground-based pilot and alongside controllers from of the National Air Traffic Systems.

Achievements recognised
Frances Watkins, our representative on the ASTRAEA Industry Executive of companies behind the project, said the team was “delighted” to receive the award.

She said: “I am thrilled that the achievements of the team have been recognised: from the clever technology required to replace the on-board pilot with one on the ground, to the innovative means of formulating new regulations and procedures, to the planning and organisation of the complex flight trials undertaken. Unmanned aircraft have been flying for years, but always in very constrained airspace. Opening up regular airspace for unmanned flight is one of the next big challenges in aviation. We are proud to be a part of the ASTRAEA consortium, which is playing a leading role in this work.”

Simon Jewell FRAeS, a founding member of the programme who has served as chairman of the ASTRAEA steering board since its inception, accepted the award on behalf of the team.