Alice Eldridge is responsible for all legal matters associated with BAE Systems, Inc. and its businesses. 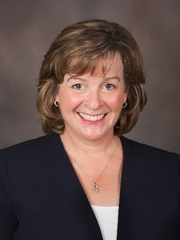 Alice Eldridge is senior vice president, General Counsel and Secretary of BAE Systems, Inc., responsible for all legal matters associated with BAE Systems, Inc. and its businesses, which collectively employ more than 34,000 employees in the United States, United Kingdom, Sweden, and generated sales of nearly $12.5 billion in 2021. In this role, she is also responsible for the organization's Contracts, Security, Ethics, Compliance and Export Control functions. Additionally, Eldridge is a member of the BAE Systems, Inc. Board of Directors.

With more than 25 years of legal experience, Eldridge was appointed to this position after serving seven years as vice president and Chief Counsel for BAE Systems, Inc. Platforms & Services sector, comprised of the Combat Vehicles, Weapons Systems, Ship Repair, Protection Systems, Ordnance Systems, and Hägglunds business units. In this role, she led the sector’s legal team as an integral facet of the business, providing strategic and subject matter guidance throughout the pursuit, capture and performance of U.S. Government contracts, as well as international direct commercial and foreign military sales contracts for programs in Sweden, Australia, India, Turkey, Saudi Arabia, the United Kingdom, UAE, Singapore, Japan and Korea.

Prior to joining BAE Systems in 2012, Eldridge held a number of leadership positions in the legal function for Lockheed Martin Corporation. She was General Counsel for the Systems Integration and Tactical Systems divisions. During her tenure, she also served as vice president of Ethics and Business Conduct with responsibility for managing the corporation’s ethics program, which is internationally recognized as a model for promoting adherence to high standards of individual and business conduct. Before her nearly two decades with Lockheed Martin, Eldridge gained experience in government contracting as an associate with the law firms of Howrey & Simon and Davis, Graham & Stubbs.

In the community, she has been active on boards for the Montgomery County Adult English Literacy Council, the Broome County (N.Y.) Urban League, and the Owego, N.Y. Growing Years Children’s Center. Eldridge also served as Chair of the International Forum on Business Ethical Conduct from 2009 to 2011.