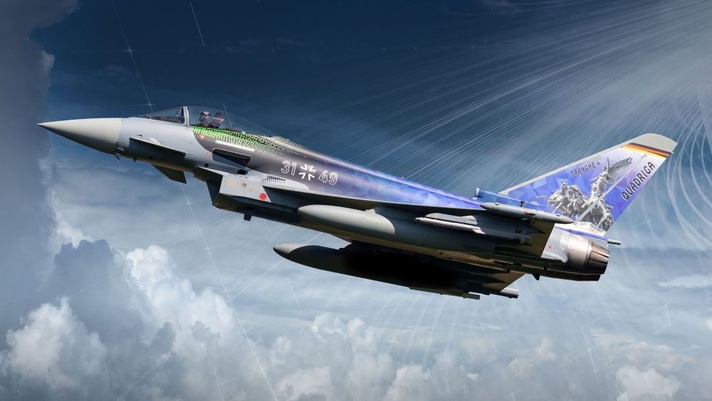 "Eurofighter Typhoon is confirmed as Germany’s weapons system of choice", says Airbus’ Head of Combat Aircraft Systems Kurt Rossner, following the country’s decision to replace its existing Tranche 1 aircraft under the Quadriga programme.
“It’s a really powerful message from a core customer,” says Kurt, who is also Chairman of the Eurofighter Supervisory Board. “It's a sign of their appreciation of our performance. It says they are very happy with the aircraft because they could have postponed the order or even selected a different one.”

He believes the deal, which extends the usage life of the Typhoon, will reinvigorate Europe’s industrial defence base, boost the Eurofighter’s export campaign in Finland.

Furthermore, the deal serves as a catalyst for future capability. Under the deal, announced in the Bundestag in November, Germany has committed to 38 new Eurofighter Typhoon aircraft for the Luftwaffe. The aircraft will be built to the latest standard and include the E-Scan radar Mk1.

This news is a further boost for the Eurofighter programme, following the E-Scan radar retro-embodiment contracts for the Spanish Ejército del Aire and German Luftwaffe Typhoon fleets and the continuation of the development of E-Scan version Mk2 announced in the summer.

Kurt says that because Quadriga is a show of faith from one of the original core partners, the decision will resonate far and wide. It represents both a continuation in the production and, at the same time, a positive signal that the capability roadmap will be extended, because Germany is now committed to Eurofighter until at least 2050 – 2060.

“The German Air Force is a very stable ecosystem, and, through Quadriga, it is clearly planning on the aircraft having an in-service life of at least 30 to 40 years,” he says.
“That means we have to enable Eurofighter’s capability growth to meet their expectation. We look forward to further developing the aircraft to meet the future needs of the German Air Force, in terms of their mission requirements and the threat environment they will face.
“Clearly Eurofighter will be an essential part of the future combat [FCAS] ecosystem and play a part in the system of systems. That means we have to grow the aircraft capability to meet the demands of the FCAS environment.”

Ahead of the Quadriga signing, the Eurofighter Partner Companies (EPCs), Airbus Germany, Airbus Spain, BAE Systems and Leonardo, worked together on a plan to bridge the production gap following the completion of the final Tranche 3 jet.

At the Airbus facility in Manching, Germany, Quadriga started life in 2020 with about 100 people working on the long-term initiative, the planning, preparation and procurement elements. When the first major components arrive for equipping the team will grow to almost 200 to 250.

By 2023 Airbus will start preparing the final assembly again and will grow the team further. In total there will be around 150 to 200 people out of the Manching Eurofighter workforce up to 3000 working purely on Quadriga tasks. 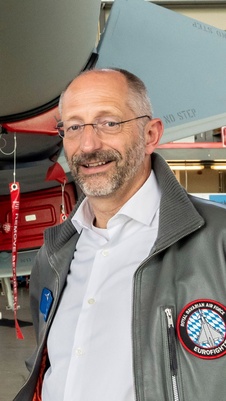 However, Kurt says that this is not simply a job numbers story. “That’s a quantitative issue, the qualitative issue is more important. People are extremely proud to work on this programme and to work on a new aircraft.

“Currently Manching is carrying out excellent work delivering centre fuselages for export to Qatar and Kuwait. But we really miss having brand new aircraft to deliver. It's a different mindset. It fills you with pride and because of that Quadriga is a real boost for the site.”

Though work on the final assembly will start in 2023, the production process is already underway starting with procuring the titanium and other metals required. “We have a very detailed plan for each of the aircraft. All the industry partners started their long-term activities even before the deal was signed because we did not want to have a production gap after the Kuwait and Qatar aircraft are completed. We have already embedded our plans into a production continuation plan.”

Kurt says the fact that Germany has decided to back Eurofighter once again is a strong sales message. “If you have a fully convinced, happy customer procuring the same product, that demonstrates they are happy with the performance, with the support, with everything. It’s just like if you buy the same car for the second time — it speaks volumes about how happy you are with that model.
"For Eurofighter this is a huge demonstration of support, even better than an export customer win in some respects, because it's a continuation and thus a very positive signal.
“This is a programme that is very much alive. The contract sends a strong message to potential export countries like Finland, Egypt and Bangladesh that they can be assured that this aircraft will be in service up to 2060.
It says there is a fully committed partner there for long-term partnerships. In terms of export opportunities, I believe the contract is a huge enabler.”

Kurt says a further challenge for Eurofighter industry partners will be to demonstrate to customer nations, both export and core nations, that they can deliver new capability more expediently. “We need to develop capability in faster and shorter cycles.
"We currently have a two-year cycle but in the future, we need to deliver a full capability enhancement package over a 12-month cycle."
A key area will be computing power and the avionics as new software architecture will have to be adopted. “We need to improve the software architecture into a more easily handled software configuration. We also need to be ready to adopt different missions.
“The UK, thorough Project Centurion, did a good job of transferring their Tornado missions onto the aircraft. Now we need to be prepared for the same thing in Germany because the next big opportunity will be the Tornado replacement contract.
"We need to be able to transfer Tornado missions onto the Eurofighter, which means additional weapons and additional capability.
“In Germany we will also demonstrate that we can even further improve the excellent flight performance and stability of the aircraft to carry different weapons. This is called the Aerodynamic Modification Kit [AMK]. It’s about generating even higher longitudinal stability of the aircraft’s aerodynamics to new potential weapon integration.” 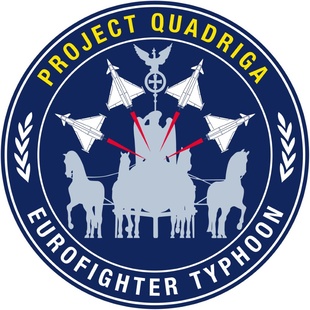 Looking to the future battlespace, where the Quadriga standard aircraft will operate, Kurt says Eurofighter will also play a role in helping de-risk technologies for next generation fighters too.
“If you were to define and design a new aircraft like the Tempest or FCAS from scratch, there would be a high risk of failure in one area. But having a stable aircraft like Eurofighter means you can implement technology enhancement programmes without risk. Take communication, for example, you can develop communication capability to other assets in the system of systems and implement it on a stable platform like Eurofighter.
“You can gain from Eurofighter knowledge and transfer technology, which was proven on a stable platform, into the future combat aircraft system, Tempest or FCAS. For the engineers it’s an excellent test bed, while at the same time Eurofighter capability improves ensuring its transfer into a new generation system environment.”
Kurt says that in the short-term Eurofighter will be concentrating its efforts on the next potential customer: Spain.

Eurofighter has submitted proposals for the replacement of the Spanish Air Force’s F-18s which are based on the Canary Islands. Spain is looking to secure 20 new Eurofighter Typhoon aircraft to boost its existing fleet under what is called Project Halcon.

Airbus is in the process of negotiations with the Spanish government to mature the proposal and a contract for the 20 aircraft is expected to be signed in 2021.

“Quadriga is proof to Spain of how it will work,” he says. “We also want to provide industry with even longer sustainability on production by securing export contracts in Finland.
"For Germany the next big target will be to prepare the proposal for replacing the aligning fleet of Tornado by Eurofighter.
“And finally, to create a technology roadmap — the LTE plan. With the LTE agreement in place, we could deliver the Quadriga aircraft but enable them for additional retrofit programmes so that in 10, 15 years’ time these aircraft are transformed into a much higher standard jet. We will be able to grow into the 2060s with this vision.
“The capability growth areas are more in terms of the missions, weapons and avionics, aero mod kit and these are all retrofittable. The good thing is we are starting from a point where the aircraft is already world class in terms of its baseline performance.”
Related articles