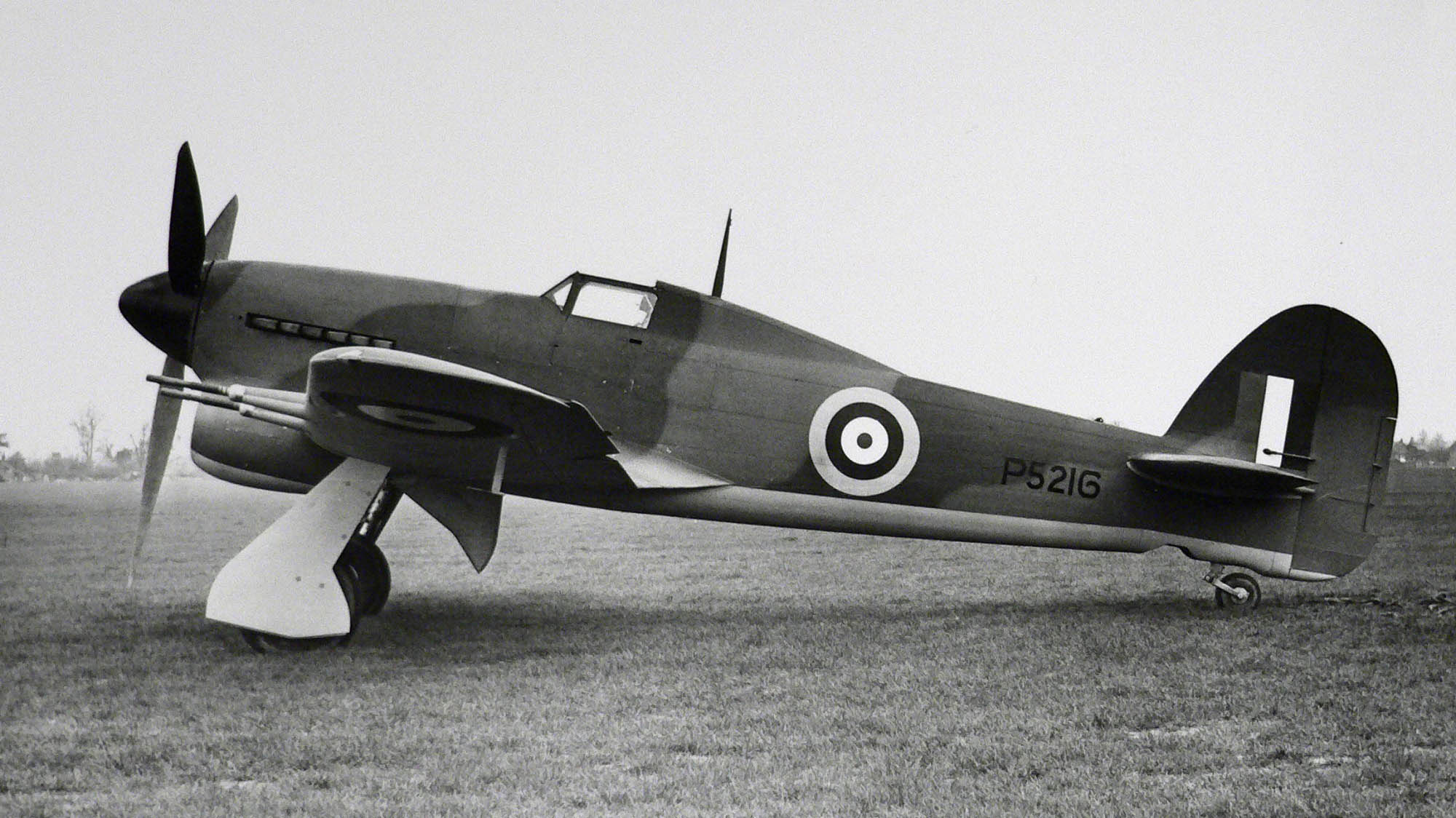 The second prototype Hawker Typhoon P5216 showing the original canopy shape with restricted rear vision.
The Hawker Aircraft Typhoon was single-seat, fighter-bomber designed against Air Ministry Specification F.18/37 which was eventually issued in March 1938.  A year earlier however (March 1937), Hawker Aircraft had pre-empted its issue by producing designs ahead of its eventual release.
Initial prototypes built to the specification were named Hawker Tornado and its story runs along very similar lines to that of the Typhoon. Affectionately known as the ‘Tiffie’, the Hawker Typhoon was intended as a high-speed, high-altitude interceptor-fighter to replace the Hawker Hurricane and the Vickers Supermarine Spitfire.
The Hawker Typhoon however, was dimensionally designed larger than the Spitfire to accommodate newer power-plants and the type was evolved around the use of the powerful 'H-block' Napier Sabre 24-cylinder sleeve-valve engine and the 'X-block' Rolls-Royce Vulture engine.  Subsequent aircraft were often referred to as the 'N' and the 'R' after their relative engine manufacturer.
The armament options selected were either configured with 12 x 0.303 machine guns on the Typhoon IA, or 4 x 20mm Hispano cannons on the Typhoon IB.
Of the two prototypes built, the first (P5212) was flown on 24th February 1940 in the hands of Hawker Chief Test Pilot Philip Lucas and although it was initially flown unarmed, it was later fitted with 12 x 0.303 Browning machine guns.
After that initial flight and during a following test flight, alarmingly Lucas spotted that the aircraft had suffered a mid-flight structural failure and despite being able to see daylight through the split, he refused to bail out, successfully returning to Langley and landing the important test aircraft, winning himself the George Medal in the process.
With war still raging in Europe, Lord Beaverbrook had ordered that valuable manufacturing resources should be concentrated of the 5 major RAF aircraft (Hurricane and Spitfire fighters and the Armstrong Whitworth Whitley, the Vickers Wellington and the Bristol Blenheim bombers) and subsequently all further development testing and plans for any production for the Typhoon were postponed.
As a result of the delay, it was much later on 3rd May 1941 that the second prototype (P5216) actually flew and it was this aircraft that served as the prototype for the Typhoon IB, fitted with 4 x 20mm Hispano cannons. 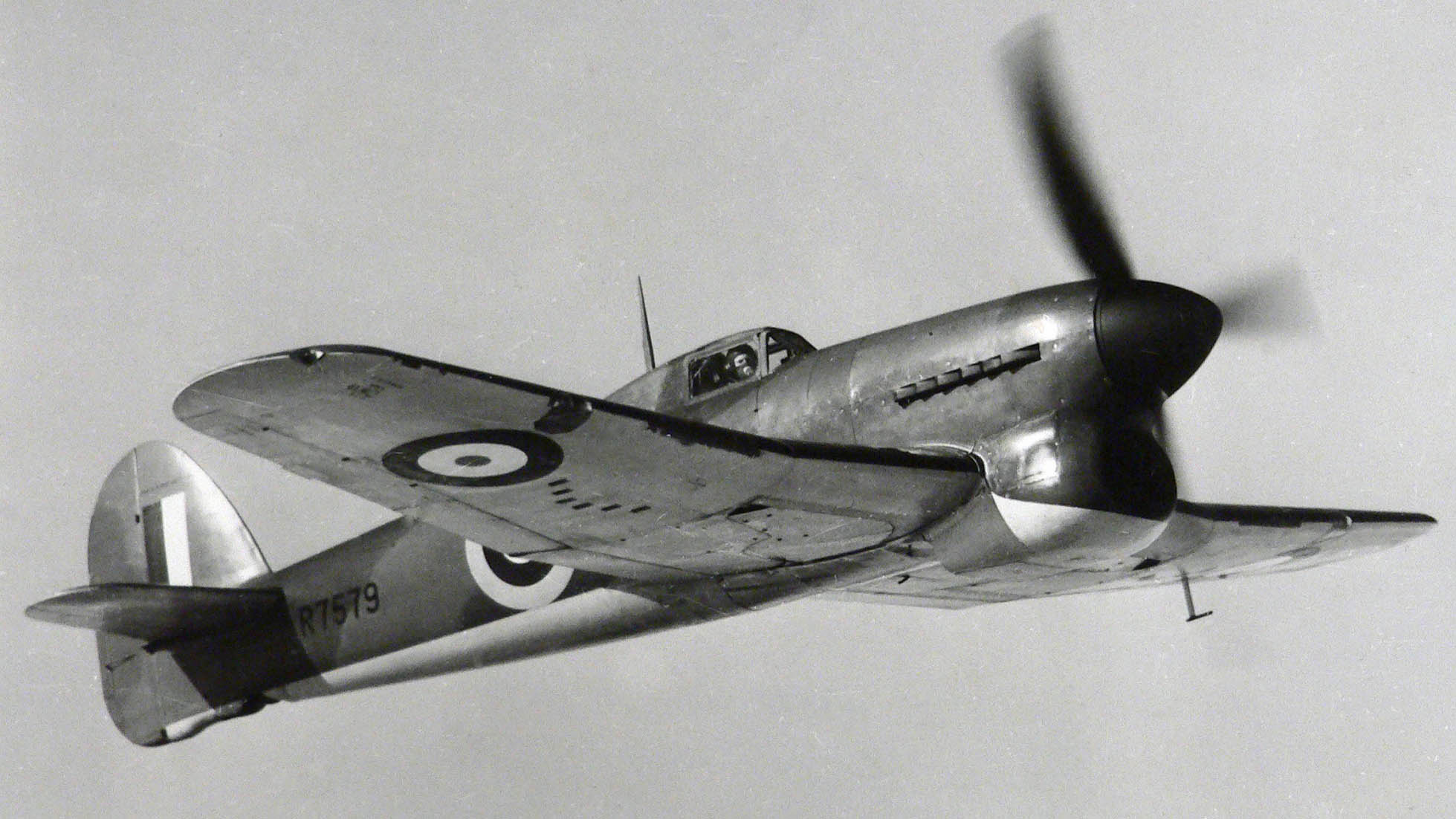 This 12-gun Typhoon IA R7579 was the fourth production Hawker Typhoon to be built by Gloster Aircraft Co.
The Hawker Typhoon was of conventional, all-metal construction with the forward fuselage based upon a typical Hawker design of duralumin or steel tube sub-structure. The rear fuselage was of semi-monocoque construction with the wing span being close to 42 ft (41' 7") with the aircraft highpoint being some 15ft off the ground.
The wing possessed great structural strength and its comparatively thick section provided large internal capacity for fuel tanks and for the housing of the heavy cannon armaments fitted. The external carriage of rockets, bombs or drop tanks also resulted in a potent capability as a long-range, ground attack aircraft. 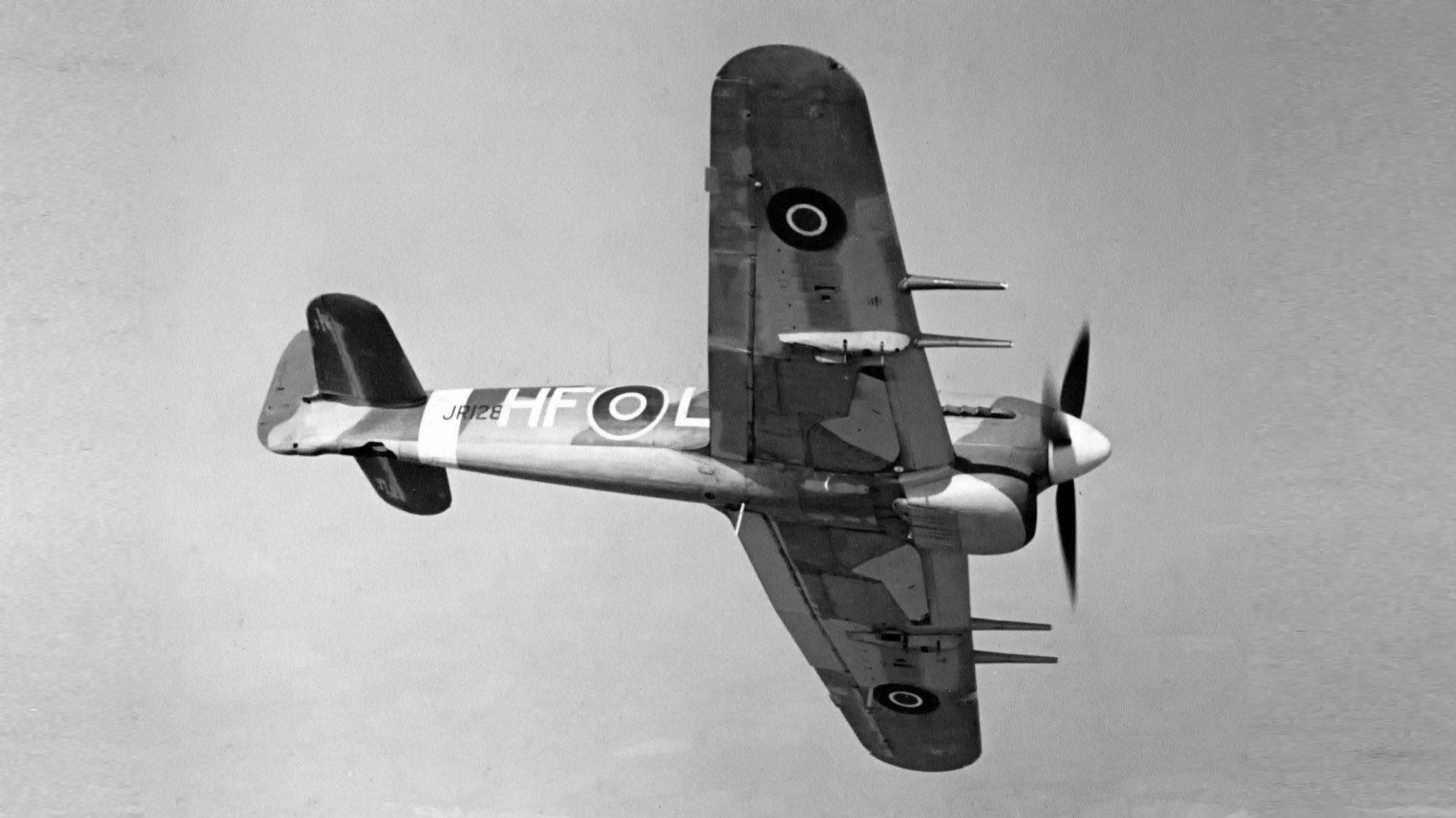 A Hawker Typhoon IB JR128 of 183 Sqn fitted to carry underwing bombs.
The pilot’s cockpit initially featured a ‘car door’ style entry with a solid fairing, aft of the pilot. The latter was found to be operationally undesirable and after 163 aircraft the design was modified to incorporate transparencies behind the pilot, whilst retaining the same general shape and the ‘car door’ entry. Early production aircraft were modified to this standard but further evolution to a one-piece sliding ‘bubble’ canopy became the production standard from November 1943, having been first tested on a Hawker Typhoon (R8809) in January 1943. 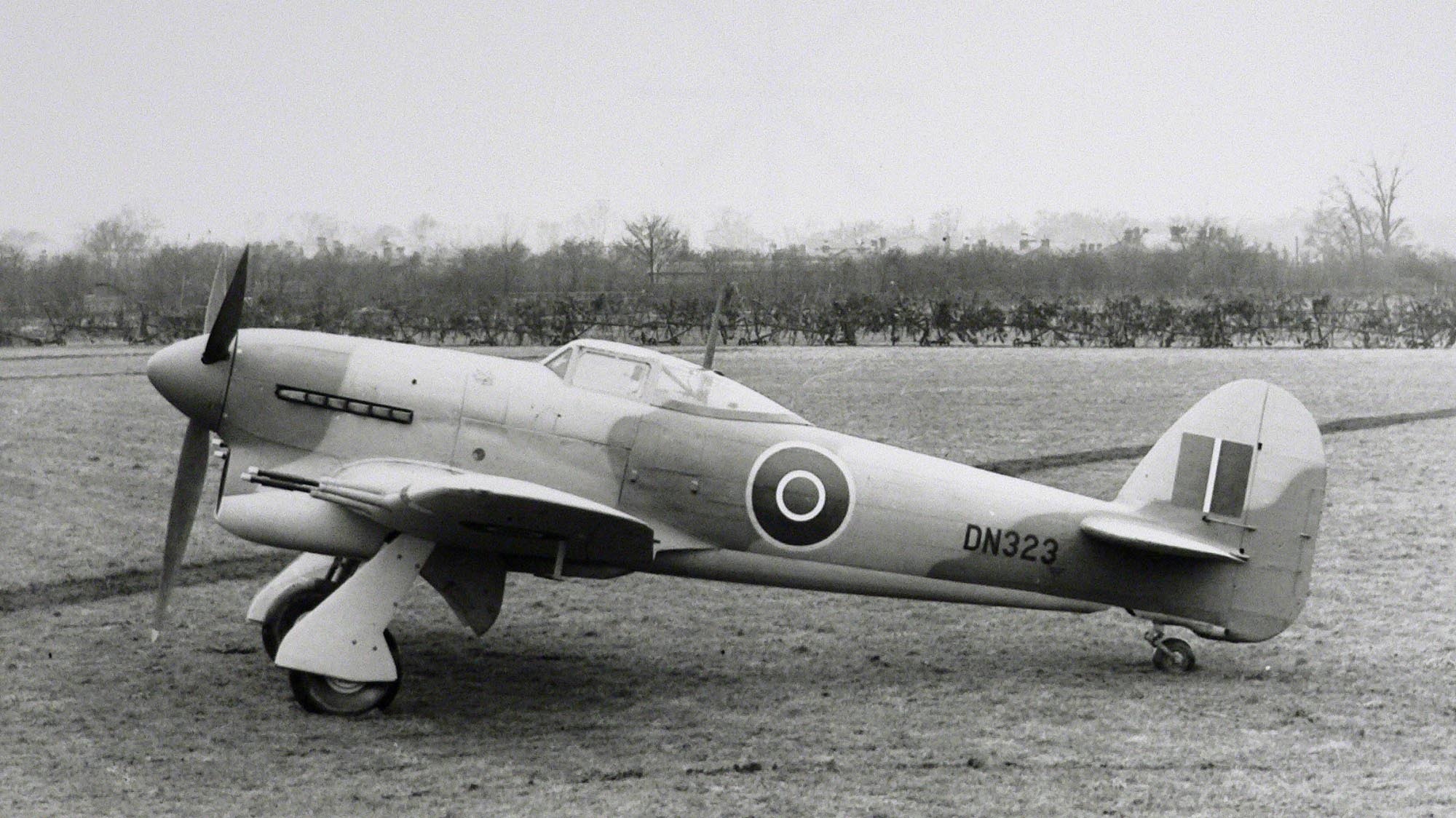 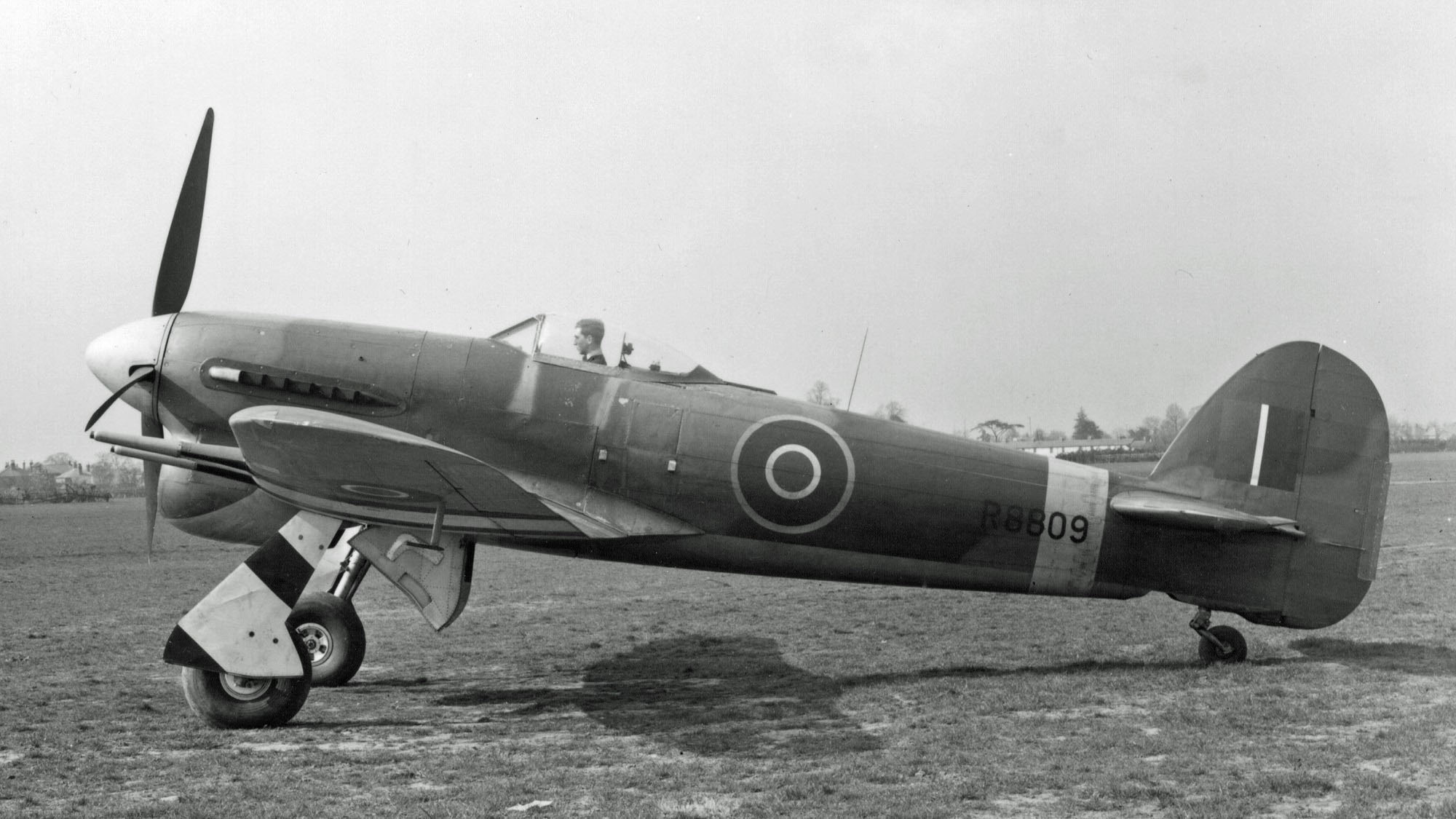 Hawker Typhoon IB R8809 was the first aircraft to trial the final clear view canopy.
Hawker Aircraft built 15 production examples of the Typhoon after which production was transferred to Gloster Aircraft at Hucclecote, who built the remaining 3,300 aircraft.
The first Gloster-built production aircraft (R7576) flew on 27th May 1941, just three weeks after the flight of the second prototype. The first Hawker production aircraft (R8198) flew on 9th November 1941.

A total of 109 production aircraft were completed as Hawker Typhoon IA before a decision was taken to standardise on the cannon-equipped Typhoon IB.

The type suffered a number of early teething troubles and was first used operationally in May 1942. Difficulties were experienced with the supercharged Sabre engine which was initially very unreliable with its performance at altitude seriously degraded by the thickness of the wing (19% thickness at the wing root) which was required by the 20mm cannon and their ammunition. This inadequacy was overcome by the addition of a turbo-charger to the Sabre engine, with the work being carried out by the Royal Aircraft Establishment (RAE) at Farnborough.  Early production numbers were also hampered by an overall lack of engine availability.
Some aircraft suffered a number of failures of the monocoque rear fuselage structure. Sydney Camm, and his Design Team at Hawker Aircraft, identified these as being only small structural failures. With the addition of some strengthening plates, the Hawker Typhoon proved to be a very powerful, robust and an exceptionally stable gun platform. It was also the first RAF fighter to demonstrate a maximum speed in level flight which was greater than 400 mph.
As the war progressed and the skies over southern England, the mighty Vickers Supermarine Spitfire was suffering increased losses against the new Focke Wulf Fw190, who were raiding RAF aerodromes. The increased reliability of the Hawker Typhoon became very significant in countering the Luftwaffe’s ‘Tip and Run’ low level nuisance raids. This led to Squadron Leader Roland Beamont (later Test Pilot of so many famous British-built jet fighters) reporting the aircraft as having ‘many excellent qualities’.
The Hawker Typhoon's comparative lack of performance at altitude however, led to the decision in 1943 to focus Typhoon operations to a ground attack role, particularly prior to, and following the invasion of Normandy in June 1944. 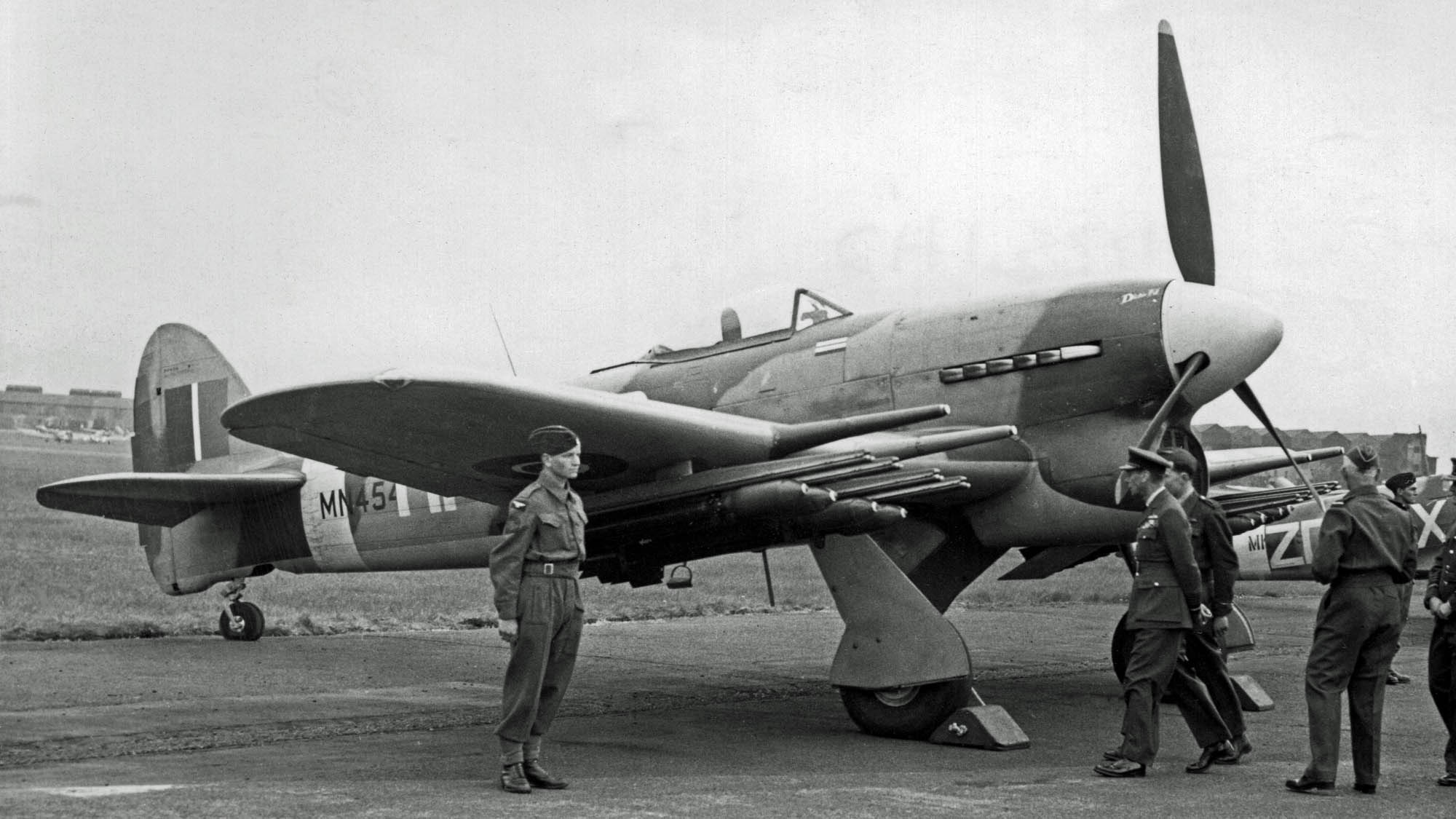 HM King George VI inspecting a rocket equipped Typhoon IB MN454 at RAF Northolt in 1943.
In this new role, the Hawker Typhoon performed admirably as it could carry 2 x 1,000lb bombs or 8 x 3-inch rockets with 60lb of warheads, carried underwing (in addition to the 4 x 20mm cannon).
Rocket equipped Hawker Typhoons were used specifically in this role from October 1943 when No.181 Squadron made their first ‘rocket attack’. If required, 12 or 16 rockets could be carried dependent of the sortie altitude and distance. Eighteen squadrons of rocket equipped Hawker Typhoons were deployed in the ground attack role post-invasion with the 2nd Tactical Air Force in Europe.
Most of the production aircraft were completed as Hawker Typhoon IBs although in 1943, a single aircraft (R7881) was converted to a prototype night-fighter (N.F. Mk. IB) and fitted with AI Mk IV radar equipment and a night-flying cockpit.
Five aircraft were modified to ‘Tropical’ standard by the fitting of an air filter in the fairing behind the main radiator housing. Three of these aircraft (including DN323) underwent hot weather trials in Egypt with No. 451 (RAAF) Squadron during 1943.
Amother variant which was used in some numbers from early 1944, was a tactical reconnaissance version, the FR.IB, with its two vertical cameras in the rear fuselage.
Some of these aircraft also replaced the port-inner cannon with a forward-facing cine camera and around 60 such conversions were completed out of the planned 200.  The main reason being for the low number was reported as the adaptation suffered from enormous engine and airframe vibration with a consequential reduction in picture quality. This also resulted in them being totally withdrawn from use by January 1945.
The later evolution of the Hawker Tempest (which originated as the Hawker Typhoon II) and the Centaurus-powered Hawker Sea Fury (both of which married a thin wing to the original design concept) unlocked its potential in the interceptor role for which the Typhoon had originally been intended. 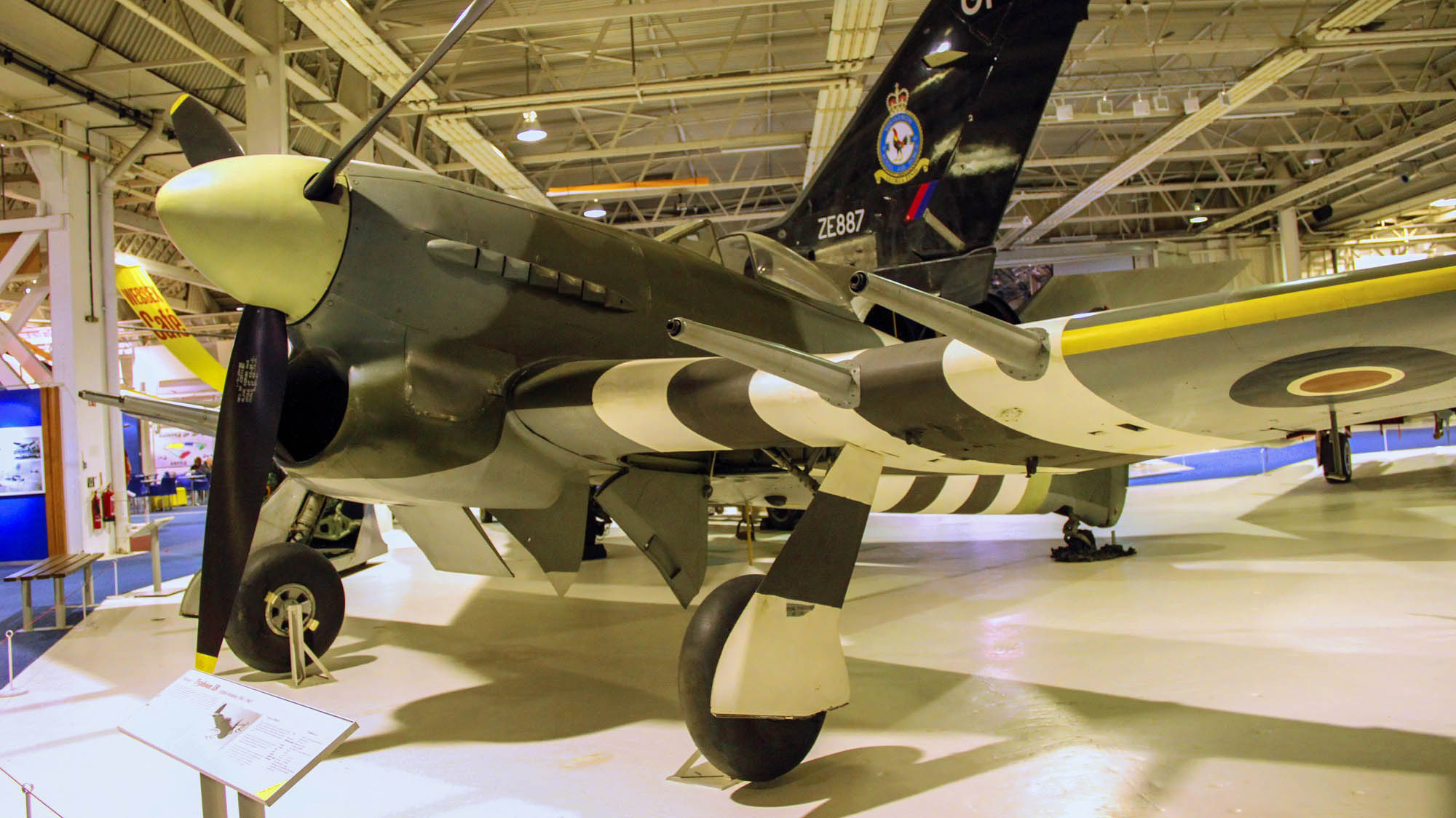 The last surviving Hawker Typhoon IB MN235 on display at the RAF Museum, Hendon.
At its height, the type was used by 26 Squadrons which is impressive considering the design almost failed during its initial stages.  It must be said nevertheless, that it turned into a real force in a ground attack role and led the way in the development of aircraft as ‘weapons platforms’.
In addition to the RAF, Hawker Typhoons served with the Australian, Canadian and New Zealand Royal Air Forces.
Only one complete Hawker Typhoon survives today (MN235) although it does seem to travel around and was last reported as being on loan to the Canadian Aviation and Space Museum in Ottawa.