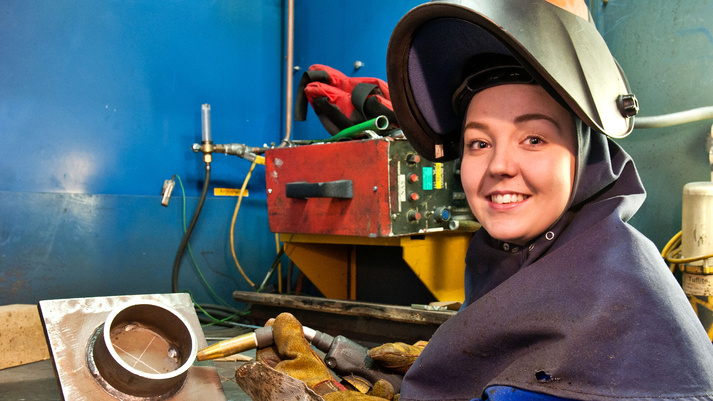 21-year-old Micha Knight was the first female apprentice welder to join BAE Systems in more than three decades when she started her Submarine Solutions apprenticeship in 2011. Since then, she has progressed to the role of Quality Control Inspector using the training she has received at the Company.
Micha took an engineering course at college where she quickly discovered she had a natural ability for welding, which inspired her to apply as a welding apprentice after previously considering a role as an electrician apprentice.
She brought samples of her work, both practical and written, to her interview and was promptly accepted onto the apprenticeship scheme. After six weeks in the ‘Pipe Shop’ she went into the Joe Murphy Welding Centre to train as a structural welder – and her test pieces impressed all who saw them.
She completed her apprenticeship with an NCQ level three in fabrication, allowing her to become a fully qualified welder at the Company.
Micha’s friends were surprised at the career she decided to embark upon, particularly as welding is still considered as a very male occupation.  “I like going out, and that means that I get quite dressed up, with the eyelashes and extensions and they find it a bit weird that I come in here and dress down into boots and overalls!”
She certainly hopes others will follow in her footsteps. “Welding is stereotypically a man’s job, but if people realise girls can do it as well, or even better, why wouldn’t they want to take it up?”
“I am now a Quality Control Inspector overseeing the welding of others. My apprenticeship was definitely the right fit for me, and the huge range of opportunities available at BAE Systems is something I would suggest other young people look into.”