Our Company Heritage Saunders Roe
Saunders-Roe (SARO) were involved in the production of amphibian biplanes, rotary aircraft and experimented with jet powered seaplanes.

It is acknowledged that whilst Saunders-Roe history in aviation does not necessarily connect directly into BAE Systems, the inter-relationship with the various companies, products, personnel and heritage run in such close parallels to Vickers, Hawker Siddeley and Gloster-Saro that we believe they deserve recognition.

Based at Cowes, on the Isle of Wight, Saunders-Roe Limited was created in 1929 when Alliott Verdon-Roe left AVRO and along with his business partner John Lord, took control of boat builders S.E. Saunders Limited. 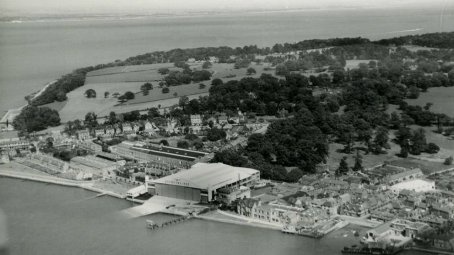 Saunders had been involved with the production of amphibian biplanes, predominantly of wooden construction (albeit their last projects were formed with their patented ‘corrugated’ metal structure for the hull), such as the plywood covered Saunders A4 Medina.

Under the name Saunders-Roe Limited (abbreviated to SARO), development and production increased: firstly with the construction of twelve A.17 Cutty Sark monoplanes, twenty-two A.19 Cloud flying boats for the RAF and thirty-one A.27 London reconnaissance aircraft for use on patrol around the UK and Canadian Coastlines.

Just before the outbreak of the Second World War, Saunders-Roe Limited re-organised itself and clearly split the shipyard and boat-building business into Saunders Shipyard Limited.

During the conflict, two further factories were opened on the Island of Anglesey, with Saunders-Roe Limited converting and maintaining Consolidated Catalina flying boats at Llanfaes. Meanwhile, their marine sister company (now known as Saunders Engineering and Shipbuilding – SEAS), diversified into the production of motor bodies for Crossley Motors.

This later led to their involvement with Leyland and the production of bodies for the new Leyland Road Tiger, or RT Double-Decker as it is often better know .

Saunders-Roe aviation activities mainly concentrated on the manufacturing of 462 of the RJ Mitchell designed Supermarine Walrus Mk1 and Mk2’s as well as 290 Supermarine Sea Otters.

In 1947, the company experimented in jet power with the SR.A/1 flying boat fighter and although it proved to have good performance and handling, the withdrawal of the Metropolitan Vickers Beryl jet engine from production  saw the whole project mothballed in 1950.

The company also went through a difficult period during the early 1950’s with the further cancellation of the SR.45 Princess, one of the world’s largest all-metal flying boats.

During 1951, Saunders-Roe took over the helicopter interests of the Cierva Autogiro Company and so entered the rotary aircraft business.  The SARO Skeeter 2-seat training helicopter and the Scout and Wasp helicopters (derived from the SARO P531) entered service with the Army and Navy both in the UK and Germany in 1956.

The last ‘fixed-wing’ aircraft produced by Saunders-Roe Limited was the SR.53, a delta-wing, mixed-power (jet and rocket) interceptor of 1957.  Despite early interest, it was overtaken commercially by the development of surface-to-air missiles and it was abandoned a year later.

In 1958, the Government-backed National Research Development Corporation (NRDC) placed a contract with Saunders-Roe Limited to produce a full-scale Hovercraft designated SR-N1 and on 11th June 1959, the SR-N1 appeared in public for the first time carrying 4 men across the water at a recorded 28mph.

Seven weeks later it successfully crossed from France to Dover, exactly 50-years to the day after the first historic air crossing by Louis Blériot.

A forced merger in 1959 saw the rotary aircraft interests of Saunders-Roe Limited combined with that of Westland Aircraft who continued to produce the Scout and the Wasp. The merger resulted in the facilities on the Isle of Wight being divided between Westland Aircraft and Hawker Siddeley Limited, who utilised the available skills of the workforce in very different ways.

Westland continued to develop hovercraft vehicles at Cowes, although it later merged its activities with Vickers-Armstrongs in 1966 to form the British Hovercraft Corporation.

Meanwhile, Hawker Siddeley Limited amalgamated their part of SARO with the Gloster Aircraft Company to create Gloster-Saro Limited. The company utilised both companies expertise and skills in forming aluminium for the production of SARO fire appliances, petrol tankers and other specialist vehicles.

This final amalgamation saw the end of the Saunders-Roe name in aviation.