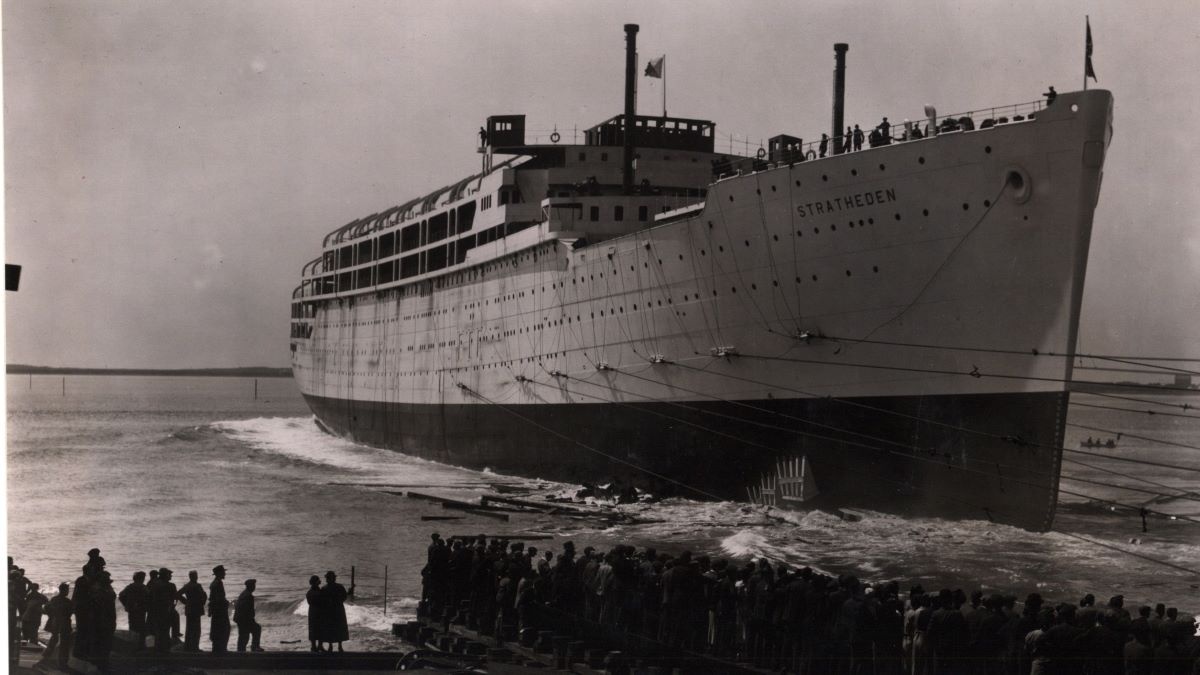 RMS Stratheden at launch 10th June 1937
The name Stratheden was selected after the small village in the historic county of Fife, best known as the home of Scotts Porridge Oats.
An embarrassment occurred shortly before the launch when P & O (Peninsular and Oriental Steam Navigation Company) found out that the Stratheden name was already registered at Lloyds against a Trawler based in Aberdeen.   Some rapid negotiations ensued, and the trawler owner was persuaded to re-register his vessel as Earnmore so that the ‘Strath’ theme could continue unencumbered.
Following a successful launch, RMS Stratheden was transferred to Tilbury for completion, where she was handed over to P & O on the 16th December that year.
Over 6-years had passed since the launch of the last Strath-class liner and an expansion in size of the onboard dining rooms, together with increased space offered in the tourist class cabins, RMS Stratheden had a much reduced tourist class capacity at just 563, over a 100 less than her predecessors.
Another, more visual difference, was that RMS Stratheden was built with only one funnel. This not only represented a change in attitude in design but also afforded an increase in available space on the top deck. The height of the remaining funnel was also increased by 9 foot to provide a cleaner and odour free environment.
She departed Tilbury for her maiden voyage to Brisbane on Christmas Eve, 24th December 1937 and thereafter she provided a mixture of luxurious passenger services to Brisbane and back, as well as a number of charter holiday cruises to Gibraltar and the Mediterranean.
In 1939, and on the very day Germany invaded Poland (1st September), RMS Stratheden had departed Tilbury for Australia, via India and Ceylon as scheduled. This would be the last time she would see her home port of Tilbury for more than six years. Despite the turmoil building in Europe, she continued onto Sydney, arriving on 11th October. After a 6-day turnaround, she departed Australia on 17th October, navigating a nervous passage through the Suez Canal on 14th November. In order to minimise her time at sea with civilian passengers, she headed into Plymouth on 24th November.
She embarked on one further voyage to Australia during 1939, collecting her passengers from Southampton on 12th December. 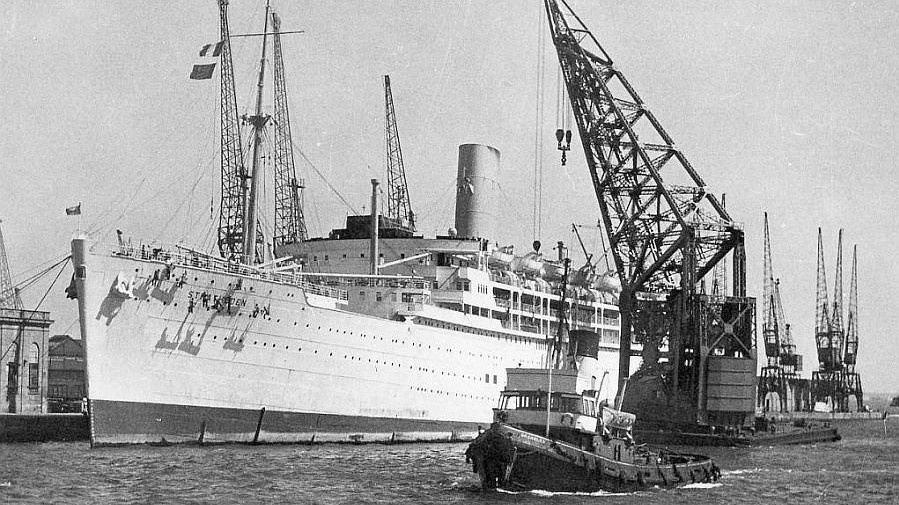 RMS Stratheden at Southampton, being re-painted in 1938
Calling at Gibraltar and again passing through the Suez Canal, she visited Bombay before arriving at Colombo on New Year’s Day, having spent Christmas and New Year’s Eve at sea in the Indian Ocean. During the final leg of the voyage, she called at Singapore before reaching Sydney on 19th January 1940. On her return journey she refuelled and took on provisions in Malta before an anxious visit to Marseille, just two days later. She eventually reached Southampton on 6th March 1940.
On 19th March 1940, the Ministry of Shipping commandeered RMS Stratheden as a Troop Transport and she set sail to Australia from Southampton once more. Following the well-used route via the Mediterranean and through the Suez Canal as usual, she reached Brisbane on 13th May. Once her allocation of troops were loaded, she began her return voyage the very same day. After calling at Colombo for fresh fruit, water, and other supplies, she laid anchor overnight before leaving Sri Lanka on 9th June, just one day before Italy sided with the Germans and declared war on Britain and France. With a hostile Italian Navy, the Mediterranean became unsafe for allied merchant shipping and she made full speed for home. On 22nd June France capitulated, surrendering her entire Channel and Atlantic coasts to Germany, placing any ships transiting to and from Southampton within easier range of enemy attack.
RMS Stratheden immediately diverted into Cape Town where she joined Orient Line's ‘RMS Orion’ and Pacific Steam's ‘Reina del Pacifico’. Together they formed Convoy BC C, which set sail on 24th June 1940, heading for Sierra Leone and the port of Freetown. There they were joined  by three other UK merchant ships and together they formed the much larger group known as Convoy BC A, which was joined by the Royal Navy Cruiser HMS Dragon, who escorted the group to Liverpool. Arriving on 16th July 1940, each vessel disembarked their precious cargo, the troops required for the conflict that was raging in Northern Europe. 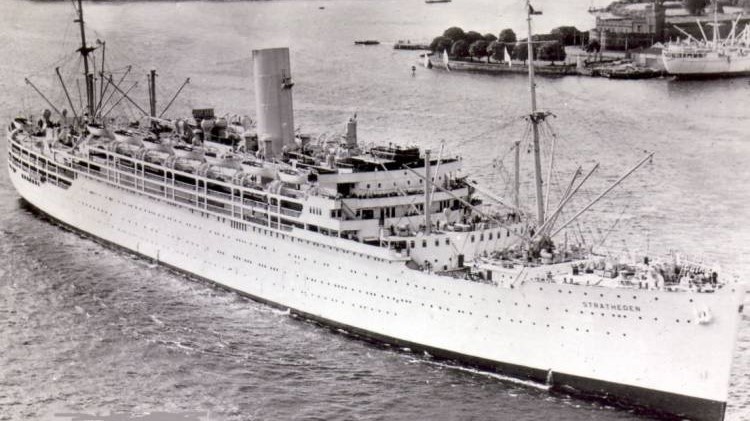 RMS Stratheden arrival in Australia
RMS Stratheden later joined the likes of the RMS Empress of Britain to form Convoy WS 2 (Winston Special Convoy No2), one of the largest troop transports of WW2, sailing from Liverpool non-stop to the Indian Ocean. On 5th August 1940, and carrying the Commodore, she led out from Liverpool, carrying 699 passengers and 317 troops to Bombay. Calling at Freetown and Cape Town for provisions, she was joined in the 17 ship Convoy by her ‘Strath Sister’, RMS Strathaird.  The convoy was successfully protected in rotation by 3 Royal Navy Destroyers with the only incident of note being the return to port of the Orient Steamer RMS Orion with mechanical problems. The convoy reached Bombay on 15th September 1940 and RMS Stratheden left a week later, carrying a further 268 passengers and 418 troops as part of Convoy BM 1 (Mumbai – Singapore).
Some of her passengers disembarked at Colombo before she continued with Convoy to Singapore. 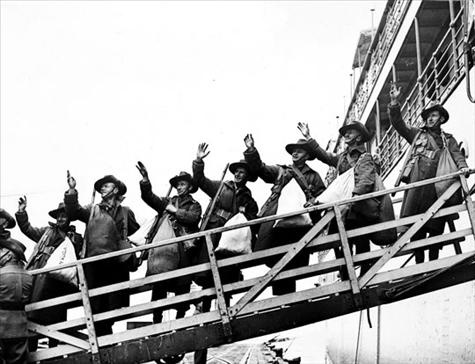 Thereafter, she bravely sailed unescorted via Fremantle, Adelaide, and Melbourne, reaching Sydney on 17th October 1940.
However, this would be the last time RMS Stratheden saw Australia until after the end of the war.
Over the next 2 years, she would be employed almost constantly transporting troops between Britain, India, Ceylon, and Egypt, often completely unescorted.
In 1941, she even headed across the Atlantic to alternative destinations such as Trinidad and even Halifax, Nova Scotia.
During the Spring of 1941, RMS Stratheden also took part in Convoy WS 7, carrying 3,264 troops as part of a 10-ship fleet delivering an exceptional 24,615 troops. The convoy had departed the Clyde on 24th March 1941, arriving at Freetown on 4th April from where it was divided, heading to the separate destinations of Cape Town and Suez.
This was a notable convoy as it was the only time that all five of P & O Strath-Sisters may have sailed together. The naval escort for Convoy WS 7 was led by the battleship HMS Nelson, supported by the battleship HMS Revenge and two Town-class light cruisers.
By 1942, and after a number of troop transport operations (including visits to Canada) RMS Stratheden had carried many thousands of troops to and from Bombay and Cape Town, both as a key element of various convoys and as unescorted sailings. At the end of 1942 and following a training mission on the Island of Skye, she joined Operation Torch, the Allied invasion of Vichy French North Africa.
As the intensity of the war continued, she sailed almost continuously as a major part of so many troop convoys. It is therefore hard to comprehend the importance of these vessels, originally built for luxury cruises under the P & O flag, something which seemed a lifetime ago in the depths of war.
During the final full year of the conflict, RMS Stratheden sailed in the company of one of her Strath-Sisters’ RMS Strathmore, visiting Port Said, Suez, Aden and Bombay.  During one of the visits to Bombay during September 1944, a 3rd Strath-Sister (RMS Strathaird) joined their MKF 35 convoy on its return leg to Liverpool.
As wartime came to an end, RMS Stratheden had recorded over 422,000 nautical miles (782,000 km) and carried in excess of 150,000-armed service personnel, all without serious incident or failure.
The Second World War had cost P & O eight large passenger ships including RMS Strathallan, one of the original Strath-Sisters as well as RMS Viceroy of India. RMS Stratheden was the first of the four surviving ‘Strath’ sisters to be returned to civilian service on 26th July 1946, followed by RMS Strathaird in September 1946. RMS Strathmore and Strathnaver remained in Government service repatriating ANZAC troops until 1948. 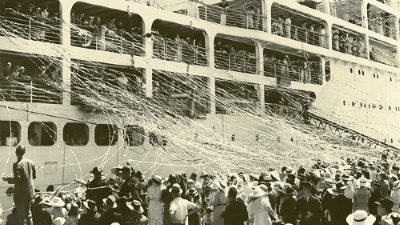 RMS Stratheden departing Brisbane 1948
When RMS Stratheden was refitted for civilian service by Vickers-Armstrongs at Barrow, the financial decline after the war combined with the growth in airline transport, resulted in a reduction in the number of first-class single cabins. The more salubrious suites were also reduced in size in order to enlarge the previously cramped crew quarters.
However, post-war shortages of essential materials delayed her refit, and it was not until 29th May 1947 before Vickers-Armstrongs returned her to service. Her first post-war voyage returned her to Sydney, Australia via a more direct route than during previous trips and this helped maximise her operational potential to four ‘back-and-forth’ sailings per year rather than three.
At the turn of the decade (1950), the Cruise Line Cunard were forced to charter RMS Stratheden as a ‘stand-in’ on four return holiday-cruises. The holidays were between the port of Southampton and the glamorous city of New York and Stratheden was called in after P & O’s new liner RMS Chuan had been delayed during its build program.
Along with her remaining ‘Strath Sisters’, RMS Stratheden was also redesignated as TSS Stratheden (Twin Screw Steamer) in 1954.
One of the saddest entries in the ships log was recorded on 13th March 1955 when she rushed to rescue the crew of the ‘lason’, a Greek trawler that had floundered in high seas off Cape Spartivento (Sardinia). The first lifeboat launched took on survivors from the water, only to be swamped by a large wave and capsize. A second lifeboat was launched but alarmingly its engine failed in the treacherous conditions. TSS Stratheden then turned windward and launched 2 more rescue boats, one of which managed to collect 4 of the trawlers crew and 3 of the rescue party. Sadly, 11 of the crew from Iason and eight of the crew from TSS Stratheden's number were lost at sea.
In December 1956, the now TSS Stratheden suffered engine trouble in Melbourne. She returned to Britain under her own power but without her passengers.
During 1961, TSS Stratheden was re-fitted as a ‘one-class ship’ to accommodate some 1,200 tourist class passengers and in December 1963, a holiday company (Travelled Savings Association) chartered her for four separate cruises.
It was whilst on one of these cruises that SS Stratheden became involved in her last drama at sea, when she went to the aid of the Greek liner Lakonia, (ex-Johan Van Oldenbarnevelt), which was on fire at sea, 180 miles north of Madeira.  On 23rd December 1963, TSS Stratheden arrived and provided medical facilities for survivors, something very apt as Lakonia and Stratheden were old friends, having sailed together in transport convoys during 1941 and 1944.
After the completion of the holiday cruises, she was to be sold to billionaire Greek shipping tycoon John S. Latsis on 5th February 1964. Whilst the Latsis Shipping line operated her as a Pilgrim vessel on religious trips, P & O continued to provide the ship's company and its 'one-class tourist' support such as catering, cleaning, and hotel services as well as bookings and berth allocations.
SS Stratheden was renamed Henrietta Latsis although rather confusingly she was renamed Marianna Latsis, a name previously allocated to her sister ship SS Strathmore. They both ended their days as floating hotels and as she was over 30-years old and at the end of her service life, the former TSS Stratheden arrived at the Breaker's Yard at La Spezia on 19th May 1969.
Thereafter, she was rather unceremoniously cut up and scrapped. Where possible, this faithful and notable ship was recycled into new steel.

Other Ships of the class (click to visit individual web pages)