RMS Strathmore
She was launched at Barrow-in-Furness on 4th April 1935, by the then Duchess of York (who later became Queen Elizabeth, and subsequently the Queen Mother). Due to this being a Royal Occasion, 4,000 school children were amongst the huge crowd that attended the launch ceremony.
After launch, RMS Strathmore transferred to Tilbury Docks for completion, before departing on a shakedown cruise to the Canary Islands, Dakar, Cadiz, and Lisbon on 27th September 1935.  Her official P & O maiden voyage commenced on 26th October and during the voyage, she set a new record for the Marseilles-to-Bombay section, recording 10 days at full steam and an average speed of 20 knots.
She mainly served on the P & O route from London to India and on 28th March 1936, she had the privilege of carrying the new Viceroy of India, Lord Linlithgow, out to Bombay, later returning with his predecessor, Lord Willingdon.
On 31st March 1940, RMS Strathmore was requisitioned by the Ministry of Shipping (later the Ministry of War Transport) into service as a Troop Carrier undertaking various roles as the war in Europe intensified. 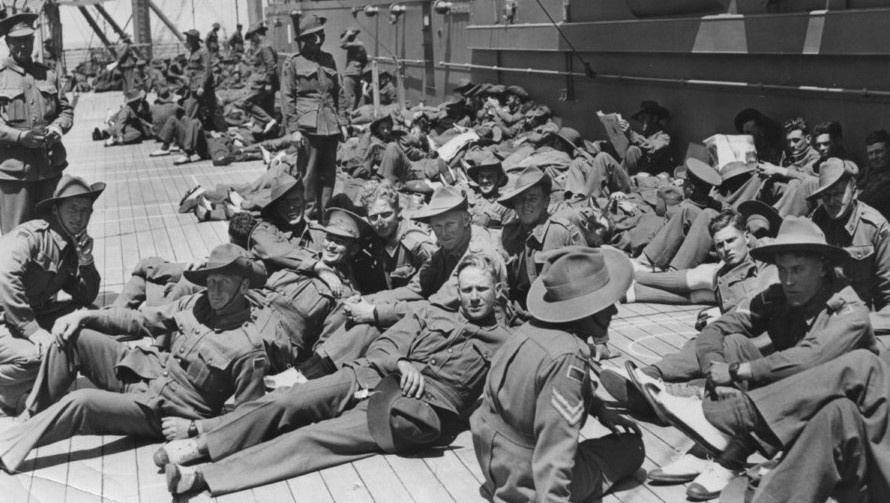 Troops Embarkation on RMS Strathmore 16th November 1940
During March 1941, she formed part of a 23-ship convoy, headed for the Middle East. Alongside were her four ‘Strath-Sisters’, as well as P & O’s prestigious RMS Viceroy of India. This vast fleet of vessels also included four Orient Company liners, as well as ships of the Royal Mail Line, Cunard, Union Castle and Canadian Pacific, who were also joined by Dutch and French liners. This was one of many special voyages throughout the war, some as protected convoys although a number were conducted without any naval escort.
After extensive refurbishment by Vickers-Armstrongs at Barrow-in-Furness in October 1949, RMS Strathmore was returned to P & O to revert back to fare-paying passenger duties and her first post-war voyage saw her sailing from London to Bombay and then onto Australia once more.
In July 1950, and after a period of rebuilding the port facilities, RMS Strathmore was the first P & O vessel to arrive post war at Marseilles.
One of the most embarrassing occurrences that befell RMS Strathmore included an engine failure on the 14th January 1953, just an hour after leaving Tilbury for India and Australia. She was eventually towed back to Gravesend where her further sailing was delayed for seven days, costing P & O additional expense for food and drinks for inconvenienced passengers.
During October 1956, the now redesignated TSS Strathmore was struck by the Norwegian cargo ship ‘Baalbek’, whilst in the Thames Estuary although thankfully the damage was only slight and there were no injuries.
In early 1961, she was refitted to become a one class ship, accommodating 1,200 tourist class passengers.
Having travelled the world for over 25-years and survived the traumas of war, TSS Strathmore was showing her age. On 22nd October 1963, it was announced that she would be withdrawn from P & O service when she sailed into Southampton at the end of what would be her final voyage for the company (a cruise) just 6 days later.
She was subsequently sold to the multi-billionaire Greek Shipping Tycoon John Latsis, and his Latsis Lines Company on 8th November 1963. Latsis initially renamed Strathmore as the Marianna Latsis although confusingly she swapped names with her Strath-Sister TSS Stratheden to become Henrietta Latsis. Both vessels were utilised as Pilgrim Ships (the owner was deeply religious) before being laid up in 1967 and used as floating hotels.
With escalating maintenance costs, TSS Strathmore was finally scrapped in 1969.

Other Ships of the class (click to visit individual web pages)