Our Company Heritage Percival Aircraft Company
A company that built its reputation through a series of record breaking flights by some of the best known aviators of the day. 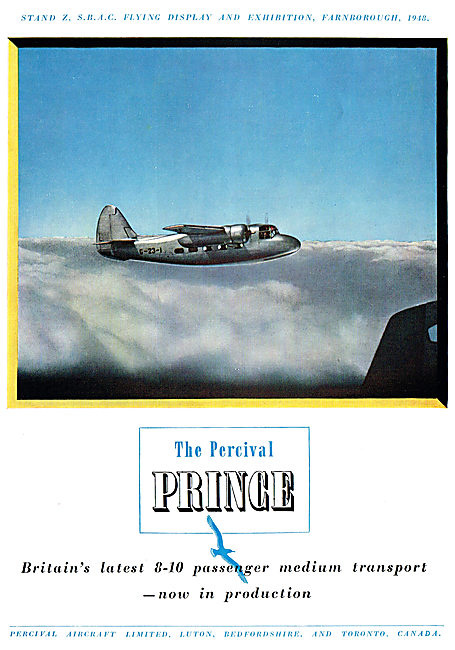 The Percival Aircraft Company has its roots with Edgar Percival who transferred from the Australian Imperial Force to train as a pilot with the Royal Flying Corps in 1916. He was a skilled aviator who was promoted to the rank of Captain in 1917.
At the end of World War I however, he returned to Australia to do film work 'barnstorming' in between giving pleasure and charter flights in Avro 504’s and a DH6 .
His interest in design lead to his collaboration in building competition-winning light aircraft, as well as honing his piloting skills in a series of proving flights in carrier-borne aircraft which included being catapulted in a ‘navalised’ Sopwith Pup.

On his return to England in 1929, he became an Air Ministry Test Pilot specialising in amphibians, seaplanes and Schneider Trophy racers.  His interest in technology grew further and he became involved in a number of collaborative projects with Saunders Roe Limited such as the Saro-Percival Mail Carrier in 1930.

In 1933, Percival turned his attention to building his own designs and set up the Percival Aircraft Company.

Initially operating from his private address in London and sub-contracting out manufacturing to George Parnell & Sons in Gloucestershire, the company quickly expanded its reputation through a series of record-breaking flights by some of the best known aviators of the day, all in Percival aircraft.

In 1934, and after recieving an order for 24 Percival Gull aircraft (which had to be manufactured by Parnell), Percival set up his own manufacturing facility in Gravesend, Kent.

With business very bouyant during the inter-war years, in 1936 they consolidated operations to a larger facility at the newly-built Luton Corporation Airport with Design Offices in a large Georgian farmhouse nearby.

As war raged throughout Europe, Edgar Percival himself become disillusioned with life in England and resigned from the company in March 1940, before moving to the USA.

The company continued independently as Percival Aircraft Limited until 1944 when it was purchased as part of the Hunting Group who, after allowing the name to continue for another 10 years, changed it to Hunting Percival in 1954, and then Hunting Aircraft 1957.