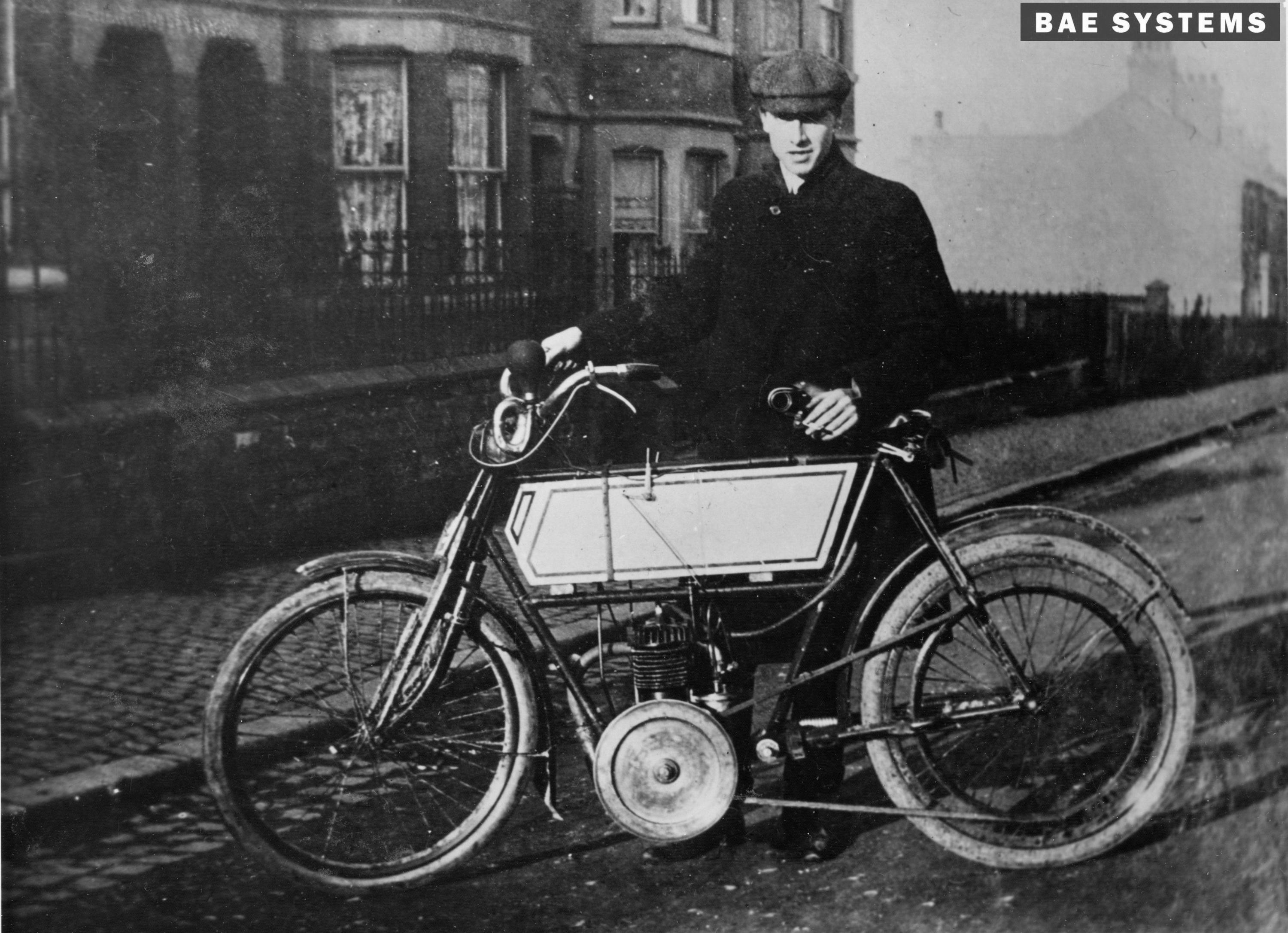 In the year we celebrate the centenary of the De Havilland Aircraft Company, one of our most famous predecessor companies, we acknowledge the power behind their iconic and truly innovative aircraft, engines, and propellers.
Geoffrey de Havilland was born on 27th July 1882, the second son of Charles de Havilland, the village curate at Holy Trinity Church in Hazlemere, Buckinghamshire.
Geoffrey enrolled at the Crystal Palace Engineering School, Sydenham in 1900 where he designed a motorcycle powered by a 1.5 h.p. engine he built himself.
By 1905, Geoffrey had joined the drawing office of the Wolseley Tool and Motor Car Company in Birmingham but he quickly became disillusioned with the slow pace of big industry.
After leaving Wolseley, he convinced his maternal grandfather to give him £1,000 to pursue his declared intent to build an aeroplane, which he embarked on the project with his friend, Frank Hearle. 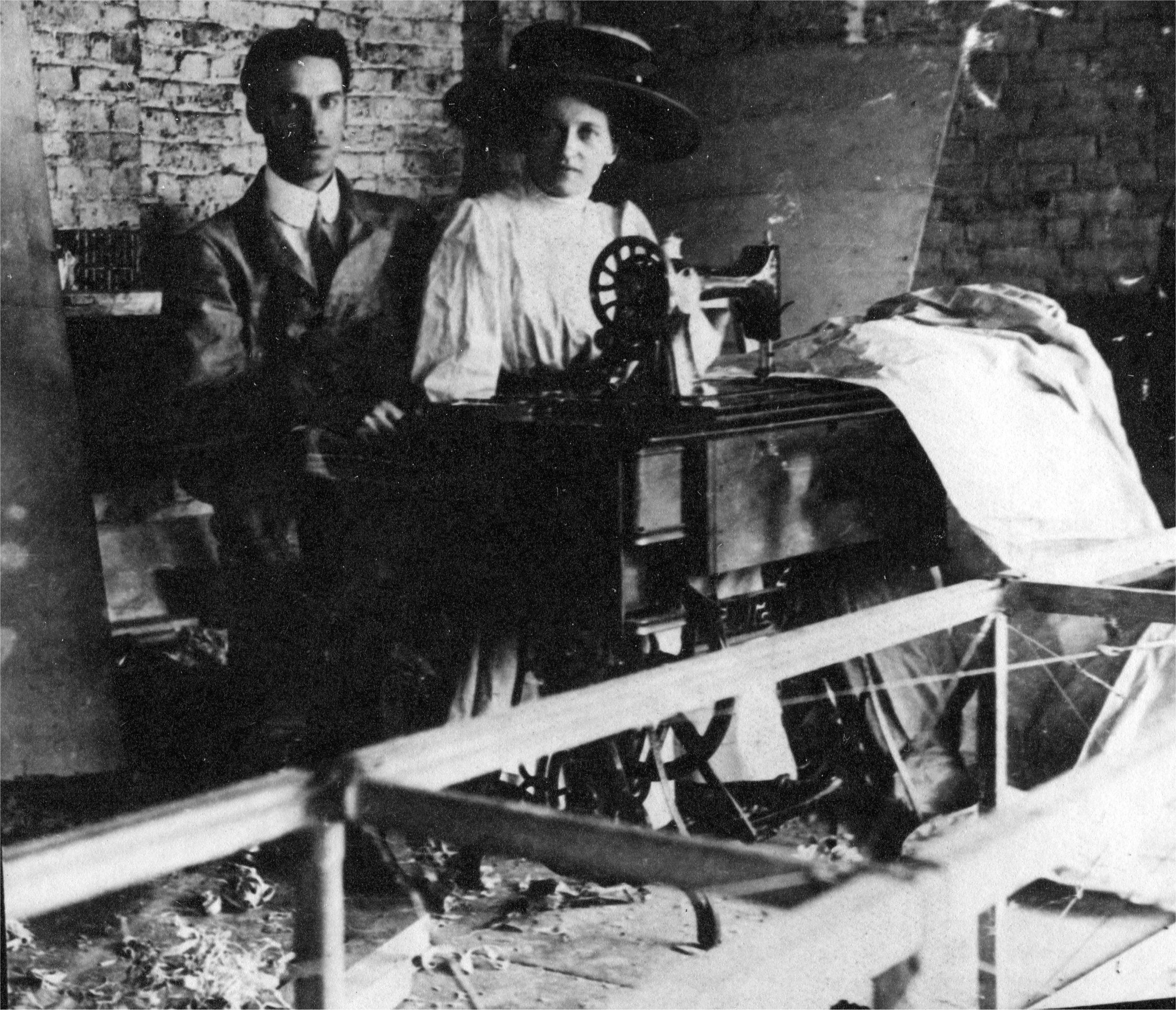 Commuting between their rented workshop in Fulham Road, West London and the ‘flying ground’ at  Seven Barrows, on Lord Carnarvon’s Estate at Highclere Castle, Newbury (now more famous as the film location for Downton Abbey), de Havilland developed his design for his first aircraft, now referred to as No 1 Biplane .
It was during his trips back and forth that he fitted in the time to court and marry Louise Thomas, the former governess to his sisters and with whom he had 3 sons, Geoffrey Junior, Peter, and John.
During his early attempts, his first aeroplane crashed in November 1909 without leaving the ground. De Havilland was unhurt bar a few cuts and grazes although the main structure was destroyed - only the engine was salvaged.
Geoffrey returned to Fulham and set about modifying his design and in an unusual vote of financial faith from his grandfather and against the wishes of his mother Alice Jeannette, he built what was to become No. 2. 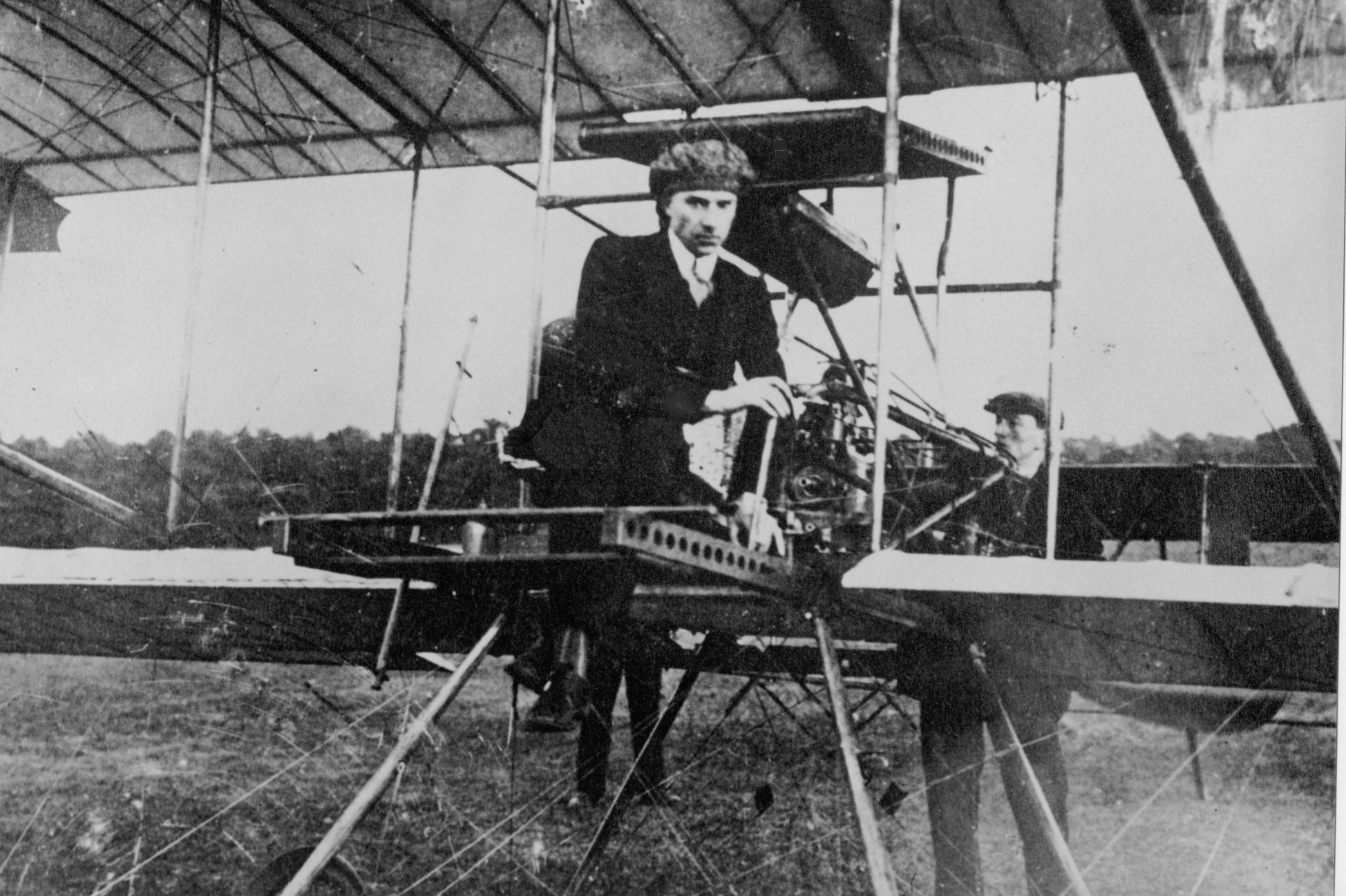 With Frank Hearle laying amongst the freshly harvested field, Geoffrey achieved his childhood dream and took to the air on 10th September 1910.
Whilst it could hardly be described as a flight, clear air could easily be seen between the flying machine and the ground.
A number of further hops turned into sustained ‘flights’ at Seven Barrows and in December 1910 Geoffrey successfully demonstrated No. 2 at The Army Balloon Factory at Farnborough. Government officials were impressed with both the flying machine as well as the man and in addition to buying his prototype aircraft for £400, they also offered him a position as a designer and test pilot.
Politics played a major part in the early aircraft industry and with the decision to abandon aircraft design and production at Farnborough, Geoffrey became disillusioned and accepted an offer from George Holt Thomas to head up the Design Team at The Aircraft Manufacturing Company (AirCo) who were preparing aircraft for use by the newly formed Royal Flying Corps in World War 1.
Airco allocated de Havilland designed aircraft with a DH prefix and in the early stages they bore a strong resemblance to the SE and FE types that were being investigated and developed at Farnborough.
Early marques were not financially successful, being built in small and unviable quantities. It was not until the hugely popular DH9 group of biplanes that de Havilland received true acclaim with over 4,000 being built in the UK and America.
The end of WW1 saw an overall slump in aircraft requirements with an abundance of second-hand machines flooding the market and causing the financial collapse of AirCo and its sale to The Birmingham Small Arms Company who subsequently liquidated its asset.
Holt Thomas had become a firm friend of de Havilland and in 1920 he lent him the money to form the De Havilland Aircraft Company in some of the former Airco buildings in Edgware. Geoffrey continued his designs, producing aircraft in small numbers, for predominantly private owner customers.
One customer who was to become a major factor in the success of the De Havilland Company was Alan Butler who was so impressed by Geoffrey’s aircraft that he invested so much into the company that they were able to relocate to more efficient and suitable premises at Stag Lane, complete with its own flying strip. 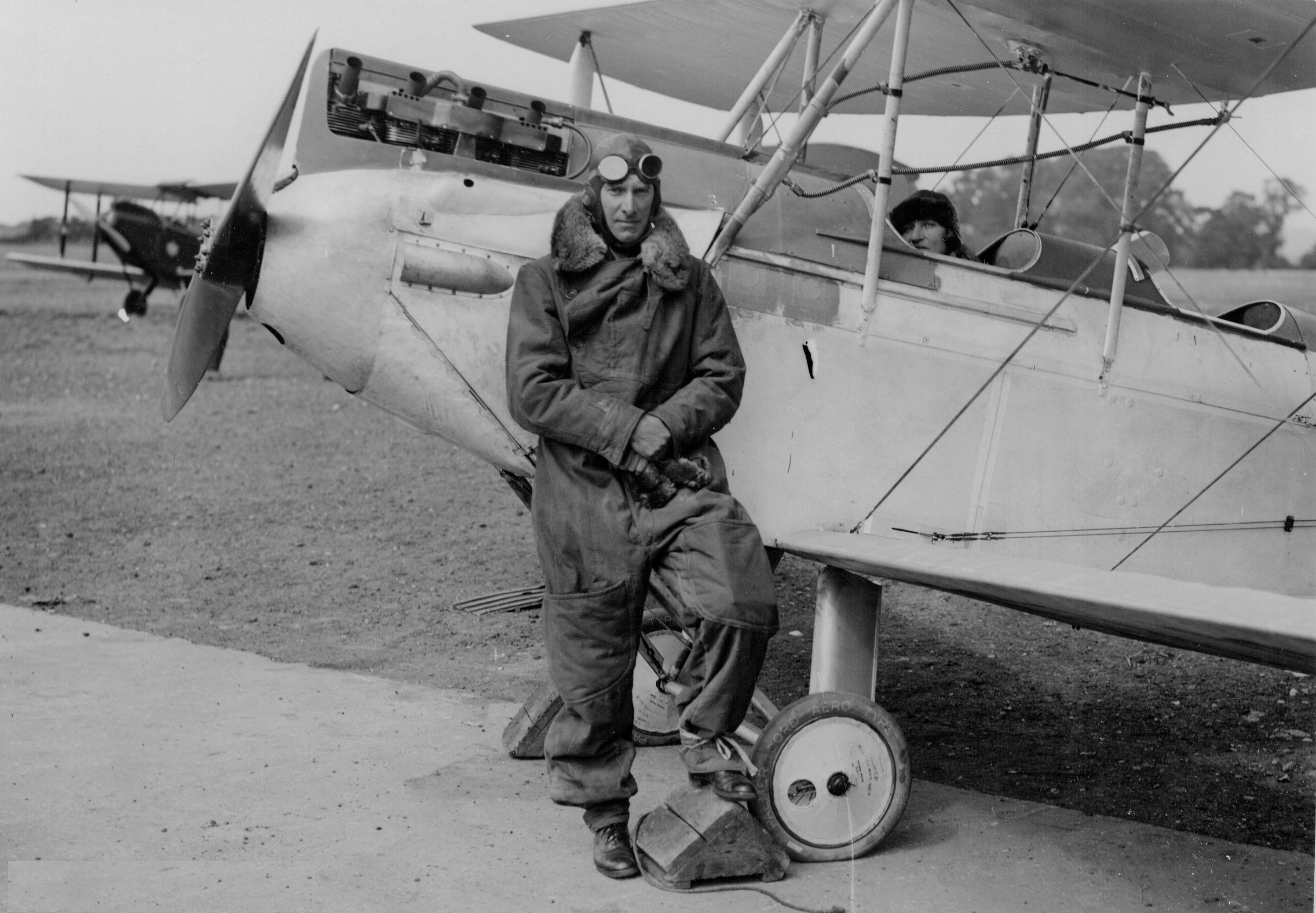 In 1925, Geoffrey’s 60th ‘DH’ design, became one of the most successful and enduring biplane designs of all time – the De Havilland Moth, named after his love of Lepidopterology (the study of butterflies and moths).
The DH60 Cirrus Moth and the subsequent aircraft based on this simple design brought the De Havilland Aircraft Company financial security.
More importantly it allowed Geoffrey to concentrate on his aircraft design, leaving business matters to Alan Butler, who had become company chairman in 1923.
The De Havilland Aircraft Company soon outgrew Stag Lane and they created a purpose-built factory alongside the new A1 trunk road at Hatfield where they employed up to 20,000 workers.
Geoffrey continued to head the design team although he was smart enough to recognise the talent within, especially those graduating from the De Havilland Technical School which he had formed in 1928. Amongst the students and apprentices was Ronald Bishop, a bright young man full of ideas that would lead to aircraft ranging from the De Havilland Mosquito (the Wooden Wonder) to the first pressurised jet-powered airliner, the De Havilland Comet. 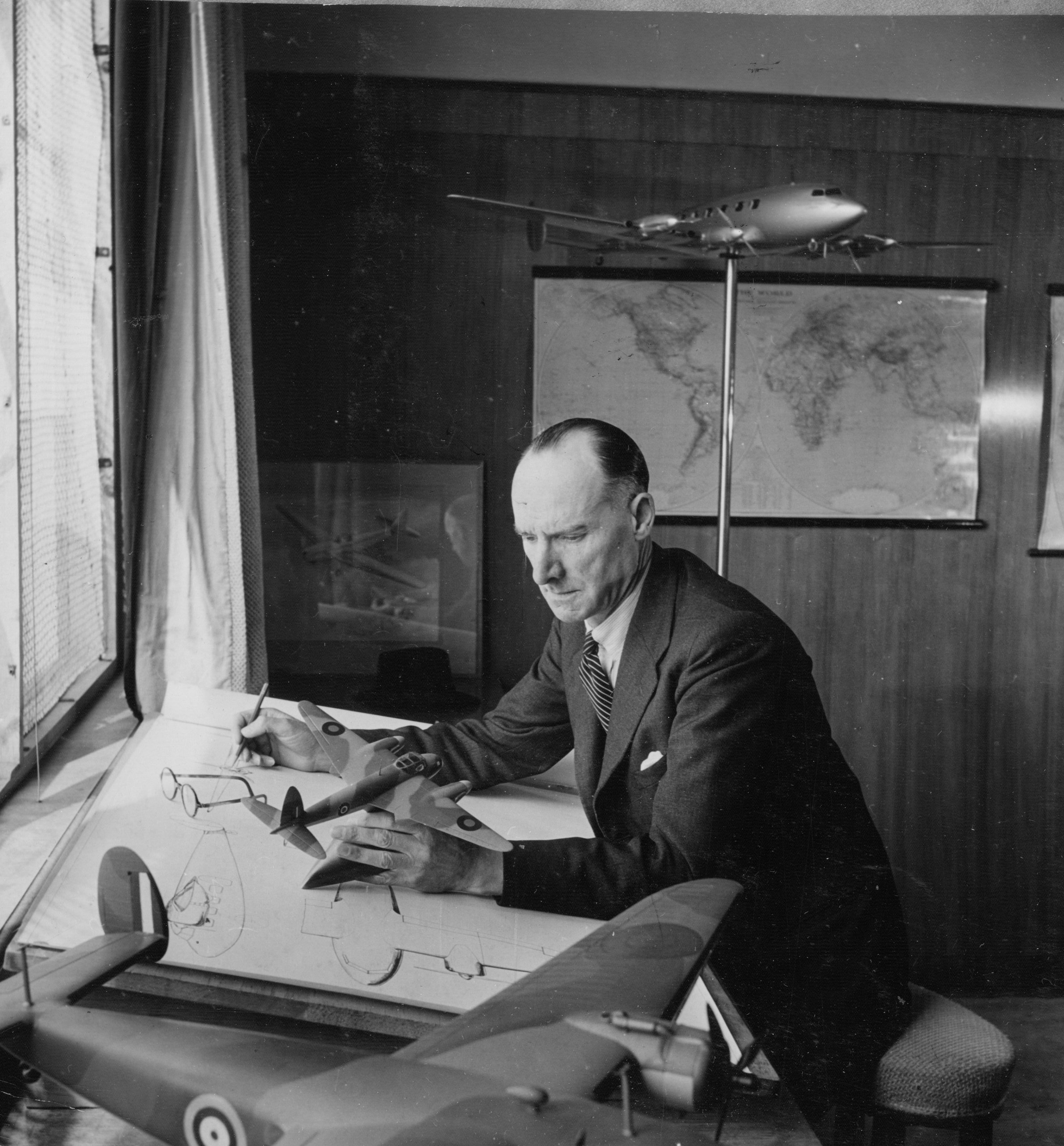 Geoffrey was awarded a CBE in 1934 and knighted in 1944 and appointed to the Order of Merit in 1962.
Amongst his famous relative, Geoffrey boast the Hollywood actress Olivia de Havilland and her sister Joan Fontaine, both cousins.
Geoffrey became a key element of the aircraft industry’s supply of aircraft to the RAF during World War II which he continued into the jet era with the likes of the hugely experimental DH108 Swallow as well as the better-known DH100 Vampire, DH110 Sea Vixen and DH112 Venom .
During the 1950s, Geoffrey continued to be the key influence within the company, especially after the deaths of his sons John (1918 – 1943) and Geoffrey Junior (1910 – 1946), who were both test pilots killed in flying accidents.
He later lost his wife Louise in 1949 although in 1951 he did  re-marry Joan Mary Frith, his tour guide on many of his beloved safaris in Africa where he spent his time photographing and filming the wildlife.
Geoffrey de Havilland, one of the worlds greatest aviation pioneers died peacefully from a cerebral haemorrhage in Watford Hospital on 21st May 1965.  He was cremated and his ashes were scattered from a DH Trident over Seven Barrows flown by his lifetime friend and chief test pilot John ‘Cats Eyes’ Cunningham.