An aerobatic primary trainer that replaced the Tiger Moth in RAF service. 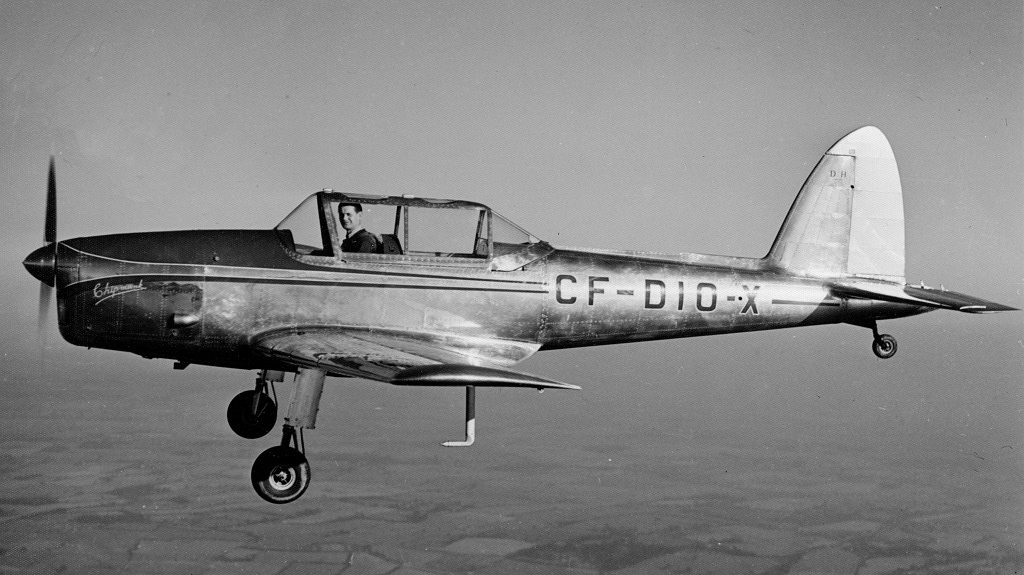 Air to air photograph of De Havilland Canada DHC-1 Chipmunk prototype CF-DIO-X
The De Havilland Canada DHC-1 Chipmunk is a 2-seat, single engine primary trainer aircraft, designed to replace the DH Tiger Moth biplane around the world.  It was the first true indigenous design of the newly formed De Havilland Aircraft Company of Canada and attracted immediate air force interest.
It was predominantly of all metal construction, with fabric covered wings aft of the spar.  It featured as sliding Perspex canopy providing excellent 360 degree vision.
The prototype DHC-1 Chipmunk (CF-DIO-X) was flown for the first time by Pat Fillingham (a Parent Company Test Pilot) on 22nd May 1946, from Downsview near Toronto and it attracted immediate interest from the military. Alongside the high level of interest from the Royal Canadian Air Force, it competed with the Fairey Primer for the contract to provide a basic training aircraft for the Royal Air Force.
Some 1,000 aircraft were built in the UK at Hatfield and Chester, with a further 217 built in Canada and 66 built by OGMA in Portugal. 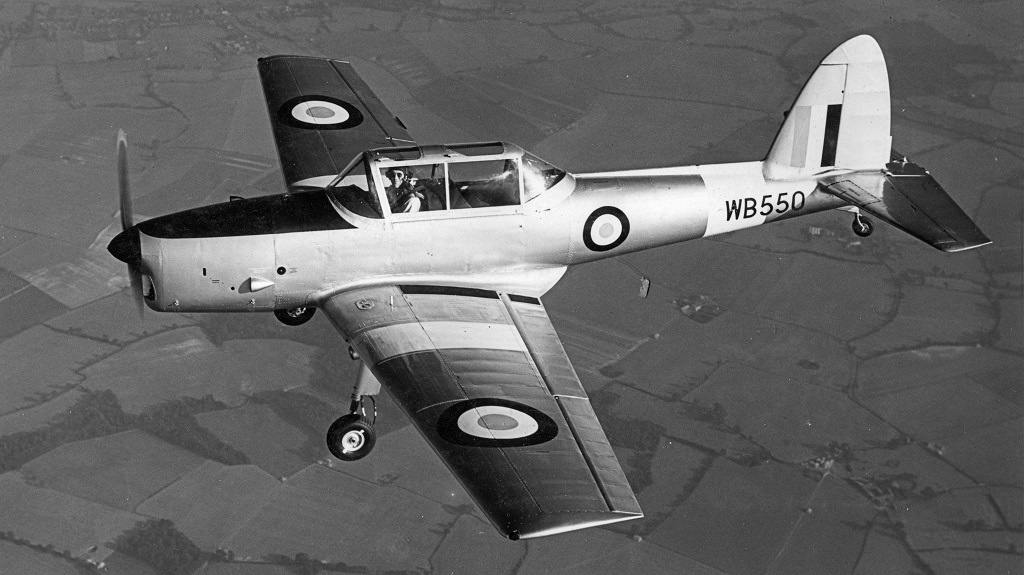 Air to air photograph of RAF Chipmunk T.10 WB550 in September 1949
The RAF DHC-1 Chipmunk T.Mk 10 variant was powered by the Gipsy Major 8 engine. This type was exported widely, serving with at least 14 air forces in addition to the RAF and RCAF.
During the 1950s and 1960s, many aircraft were brought onto the British civil register by private owners and commercial organisations, especially after they were withdrawn from RAF service. These are mainly designated DHC-1 Chipmunk Mk22 or DHC-1 Chipmunk Mk23, serving crop sprayers and glider towing-tugs, as well as personal transport for those that could afford their own aircraft.
The pure simplicity and easy maintenance make the DHC-1 Chipmunk very popular aircraft with flying schools around the world and after a period of evaluation at the Aeroplane and Armament Experimental Establishment at Boscombe Down, a fully aerobatic DHC-1 Chipmunk was also adopted by the RAF.
Prince Philip, Duke of Edinburgh actually learnt to fly in a DHC-1 Chipmunk and has always claimed it to be one of his favourite aircraft. 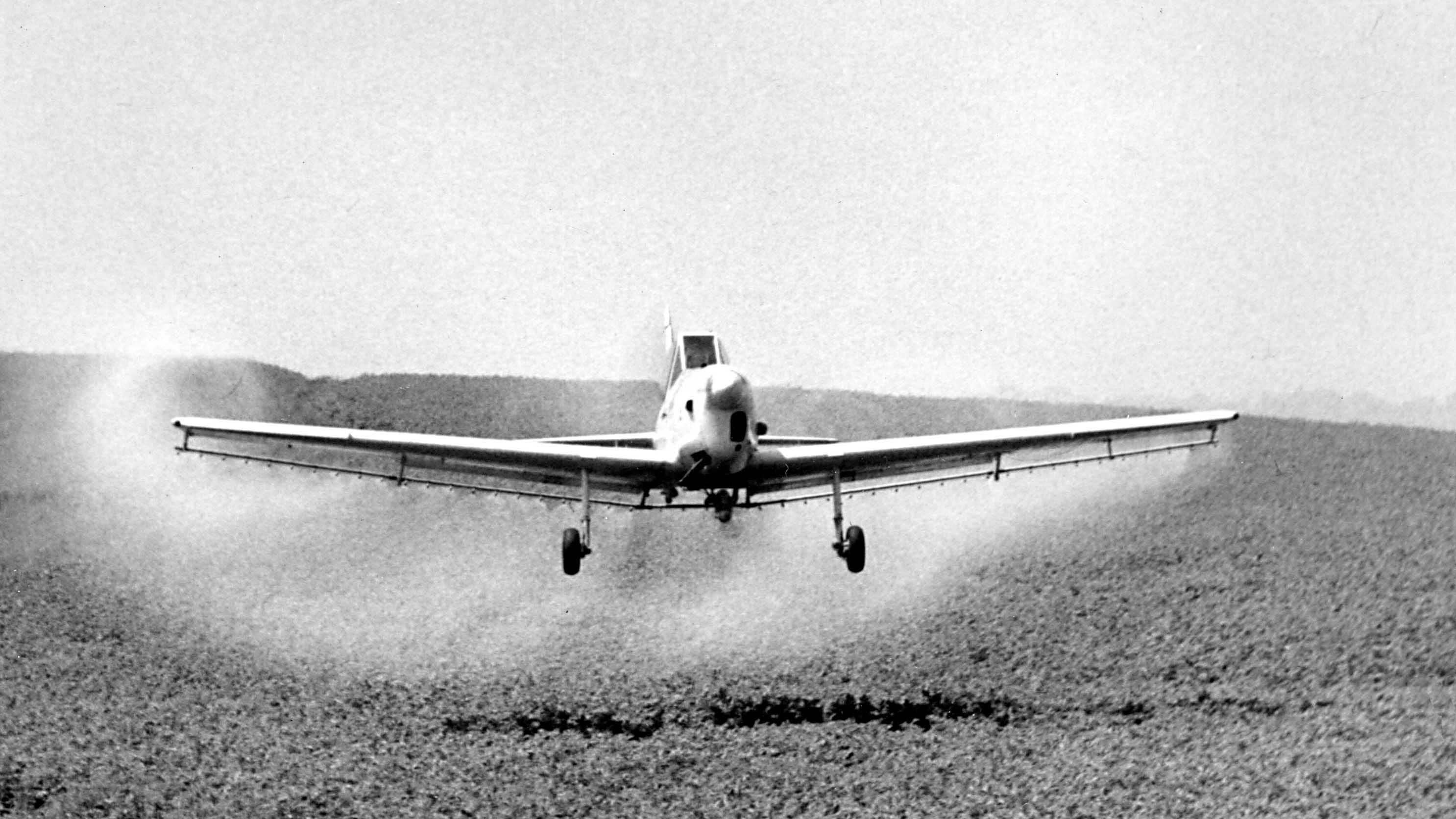 Single seat De Havilland Canada DHC-1 Chipmunk 23 agricultural version
Other adaptations include extensive modification for competition aerobatics (re-engined and fitted with constant speed propeller and inverted fuel systems) whilst most of those employed in glider towing being re-engined, typically with the 180hp Lycoming O-360.
Some aircraft, particularly for Canadian use, were fitted with a more aerodynamically refined one-piece blown cockpit canopy.
A side-by-side cabin arrangement was also designed as the DHC-2 but this was never produced and the DHC-2 designation was eventually allocated to the De Havilland Canada DHC-2 Beaver.
It is believed that there are still hundreds of DHC-1 Chipmunks in operation around the world, even after nearly 75 years of loyal service.