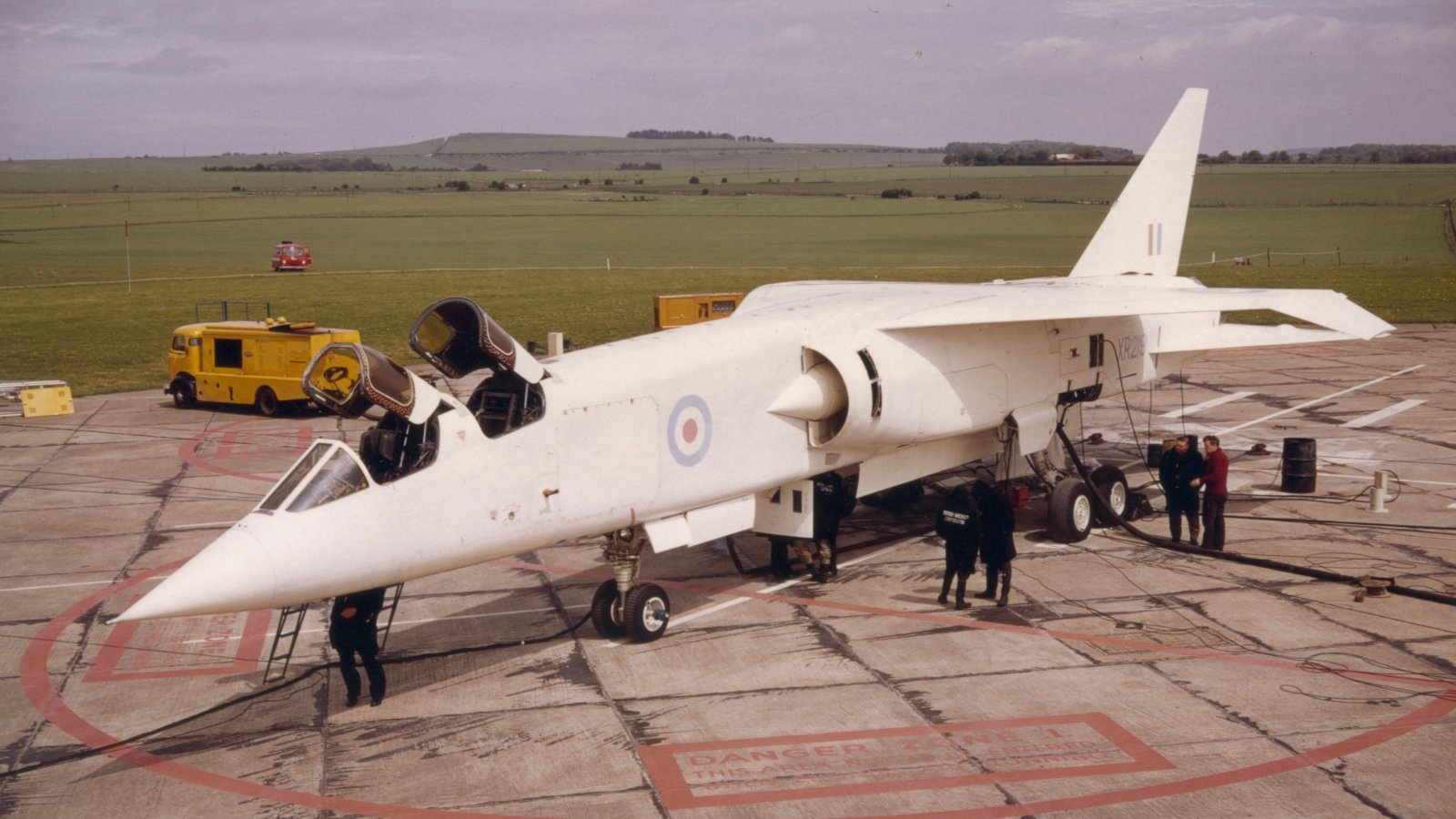 BAC TSR-2 XR219 on apron at Boscombe 1964
The British Aircraft Corporation  (BAC) TSR-2 was a cancelled Cold War strike and reconnaissance aircraft developed by BAC for the Royal Air Force (RAF) in the late 1950’s and early 1960’s.
The programme had a formative influence on the shape of the British aircraft industry and many of its design and technological breakthroughs can be seen in aircraft flying the skies today.
The project for a low level strike and reconnaissance aircraft was conducted against requirement (G)OR.339.  It was issued in 1956, and indicated that the Government was only willing to let this contract go to a consortium of companies, thereby forcing rationalisation of the industry.  Initial submissions were also made such as the P.17A by Shorts / English Electric and the NA.39 by Blackburn Aircraft.

The Air Ministry eventually selected the P.17A and the Vickers-Armstrongs Type 571 for further consideration although it soon became known that the Ministry favoured the Vickers submission which included not only the aircraft design, but a ‘total systems concept’.

In January 1959, the Minister announced that the contract was to be awarded to Vickers with English Electric as a sub-contractor.  It was also announced that the project would be called TSR-2 (Tactical Strike and Reconnaissance, Mach 2).
Following huge government pressure, Bristol Aeroplane Company, English Electric Company, Vickers-Armstrongs Limited and Hunting Aircraft all combined in 1960 to form the British Aircraft Corporation (BAC) to produce the BAC TSR-2.   The remaining major concerns, De Havilland, Hawker Siddeley, Gloster Aircraft, Armstrong Whitworth, Folland Aircraft and Blackburn Aircraft combined to form Hawker Siddeley Aviation Ltd to concentrate on other civil and military contracts.
TSR-2 was a long (89ft) slim aircraft with a shoulder-mounted delta wing with turned down wing tips. Power was provided by two Bristol Siddeley Olympus engines equipped with afterburning. The tandem main wheel units retracted into the fuselage, allowing a very thin wing to be fitted. The fin and horizontal tail surfaces were all-moving, and provided control around all axes, with the ailerons providing both pitch and roll control. 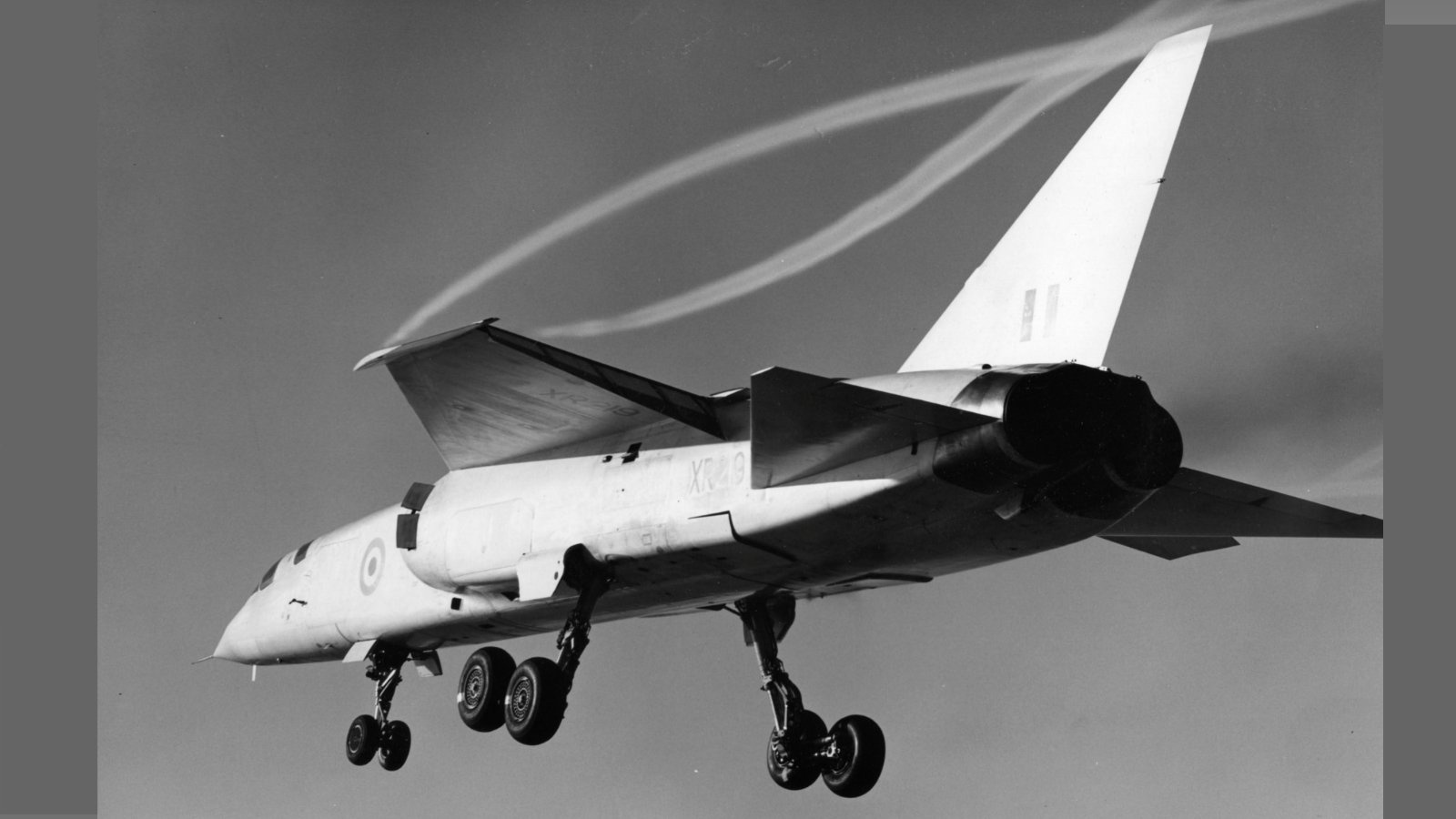 BAC TSR-2 XR219 Air to Air with trails
The prototype aircraft (XR219) made its first flight at Boscombe Down on 27th September 1964, in the hands of test pilot Roland Beamont (a former RAF Wing Commander) and it was in fact, the only airframe to take to the air. The development programme showed that the aircraft had great potential, although engine development and undercarriage retraction problems caused some delay to the flight programme.
On Test Flight 5, the port main undercarriage failed to retract as the down selection successfully lowered the nose and starboard main undercarriages, but left both main undercarriages with bogies in a partially extended vertical position. Beamont determined that a landing was possible due to the good low speed handling characteristics of the aircraft, and after consultation with the ground engineers, he conducted a very gentle approach with low sink rate. At touchdown, both bogies rotated to the correct position. The problem was soon resolved and the test programme continued. 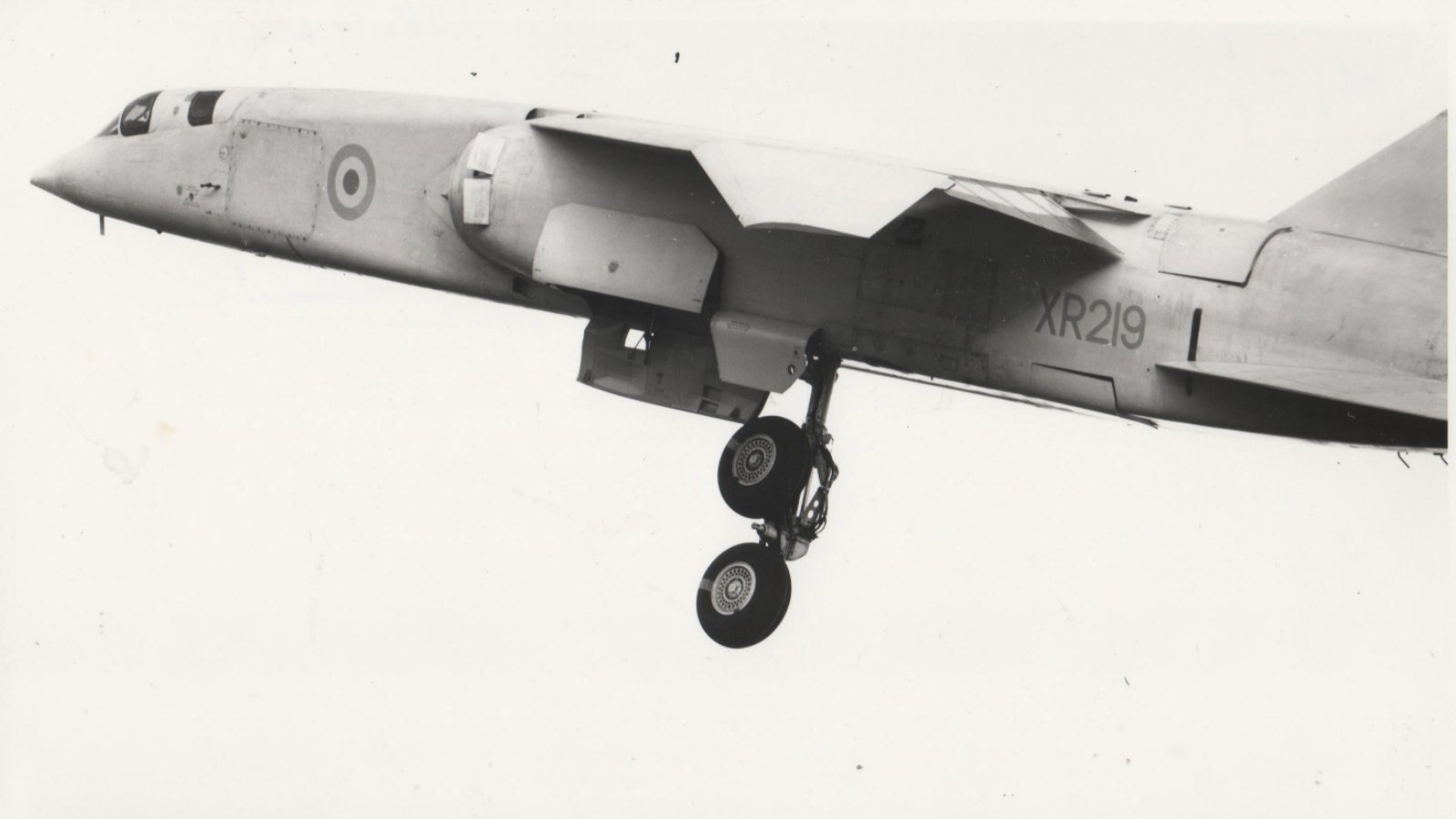 BAC TSR-2 XR219 Air to Air with dangled undercarriage in 1964
However, the cost of the programme became a matter of political contention and at two Cabinet meetings held on 1st April 1965, it was decided to cancel the BAC TSR-2. This it was claimed was on the grounds of projected cost although some point more directly to a political option to acquire up to 110 General Dynamics F-111 aircraft from the USA.  The decision was announced in the Budget Speech of 6th April 1965.
The maiden flight of the second development aircraft (XR220) was due to happen on the same day but following an 'accident' in conveying the airframe to Boscombe Down, it never happened.
The subsequent cancellation of BAC TSR-2 led the industry to focus on collaborative projects such as the military project such as Jaguar and Tornado, and civil projects such as Concorde and Airbus.
BAC TSR-2 Image Gallery 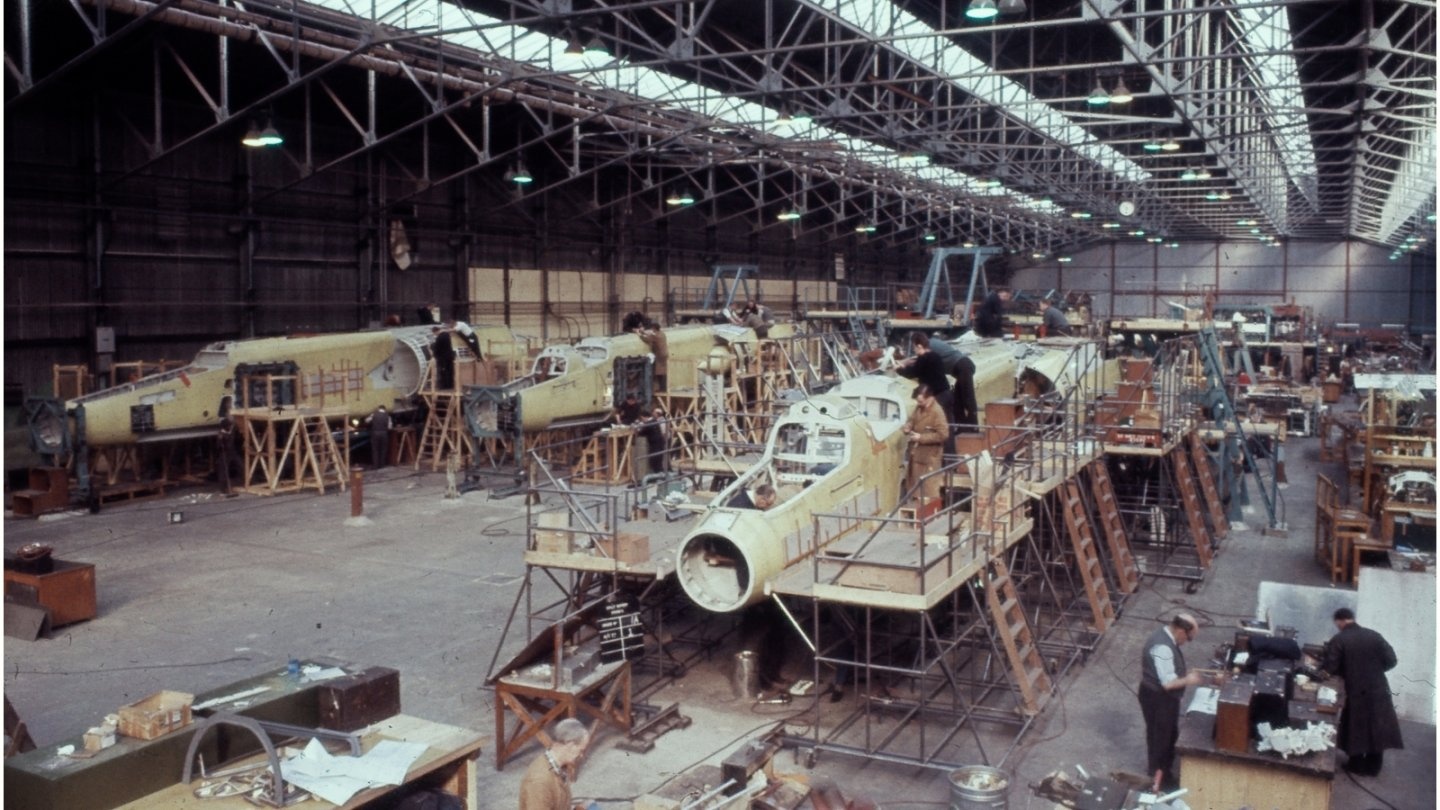 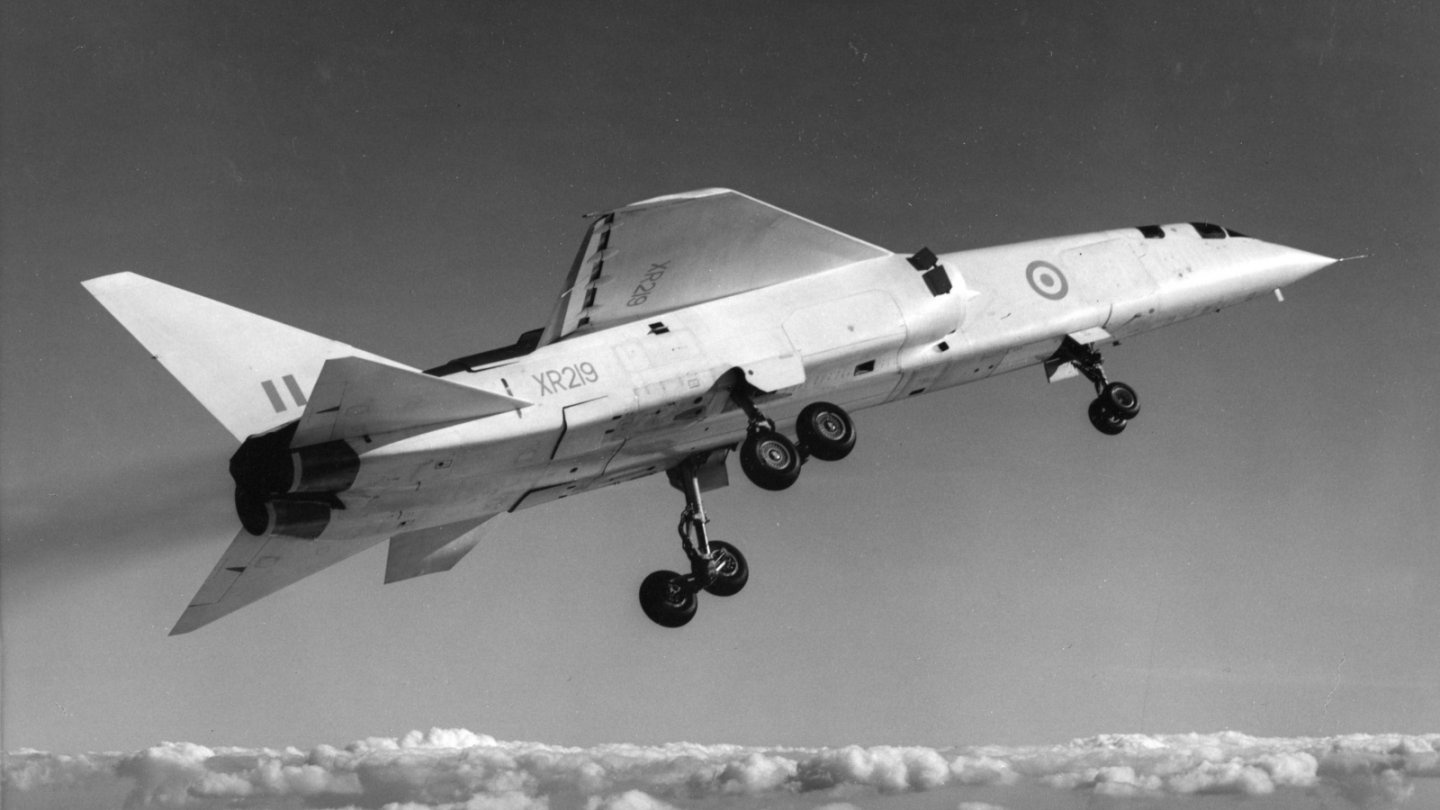 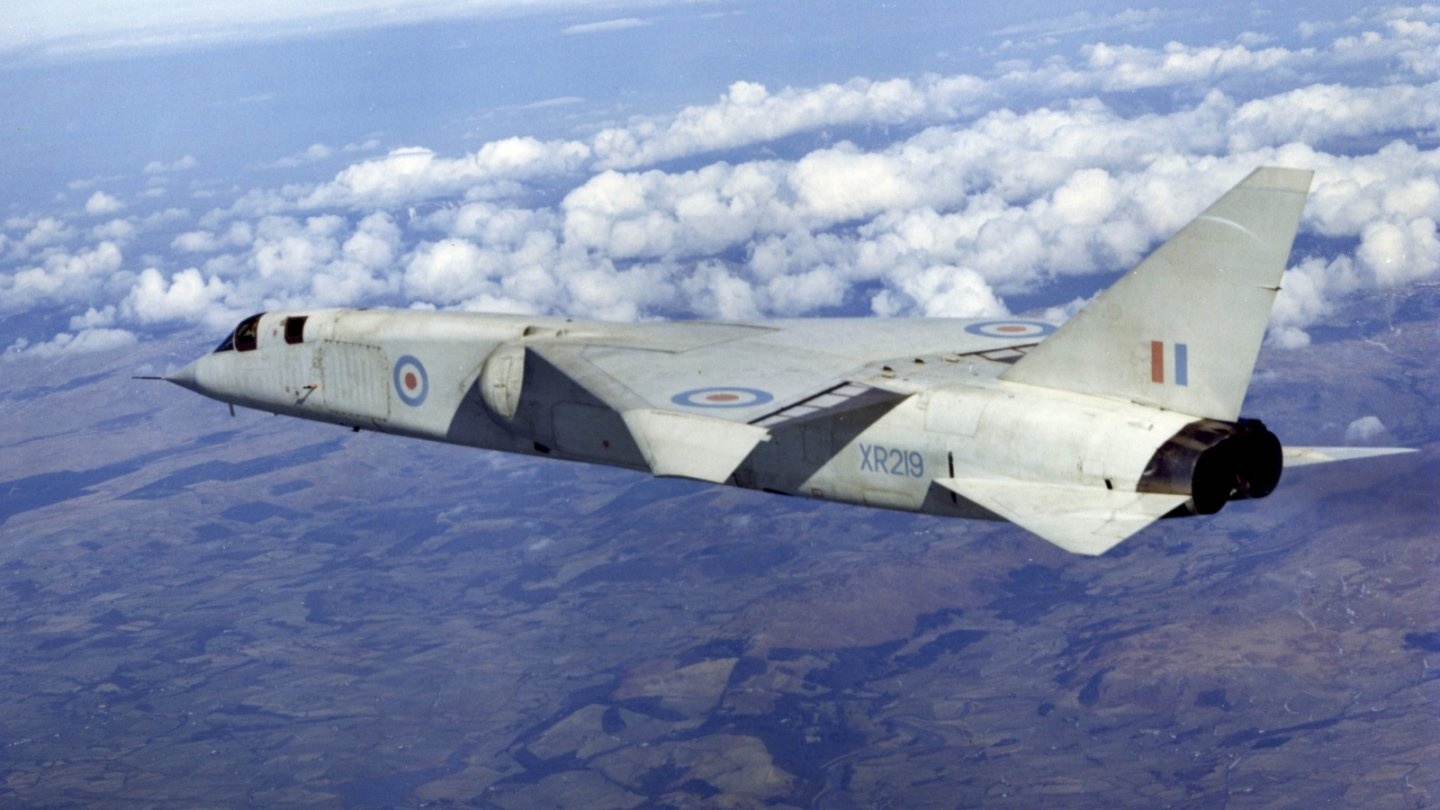 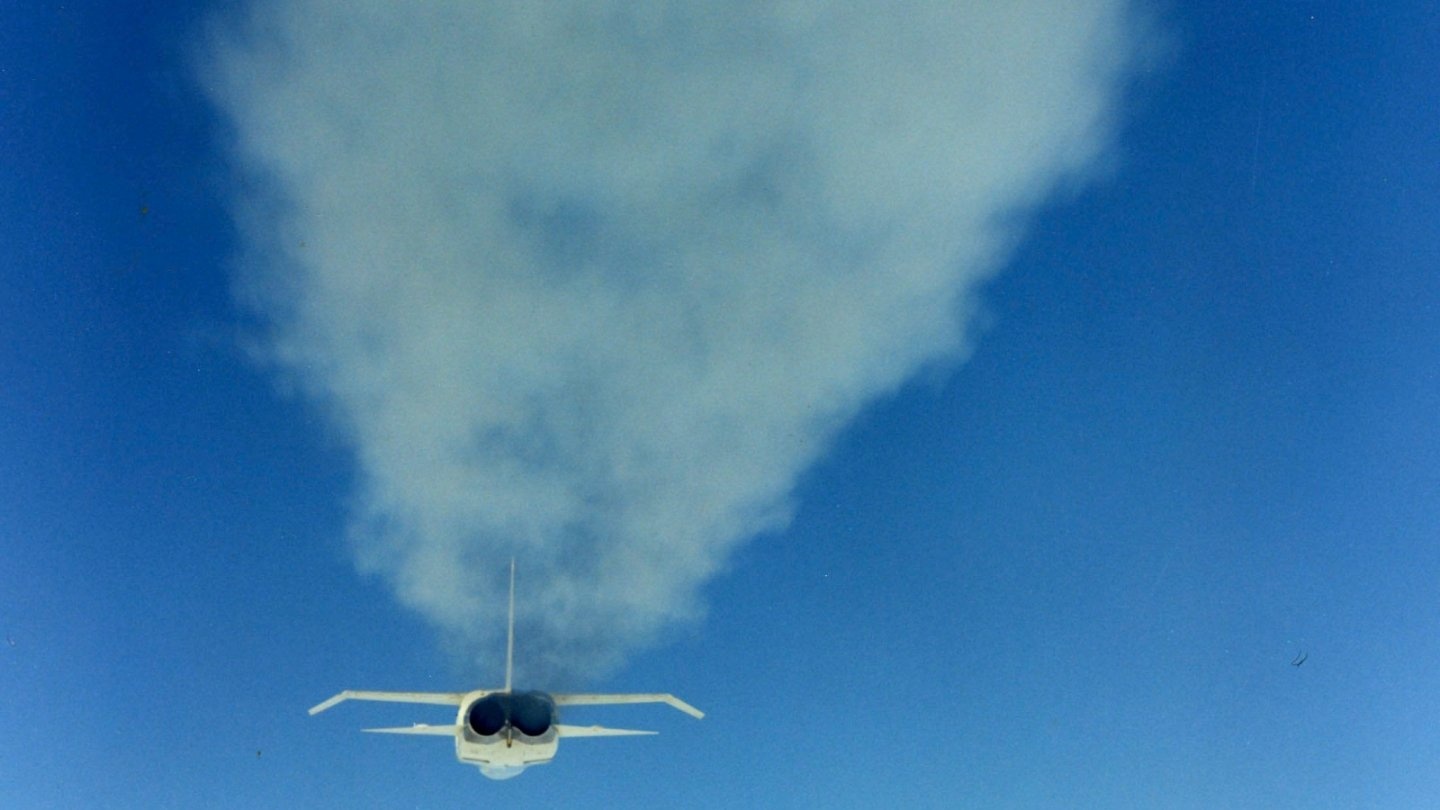 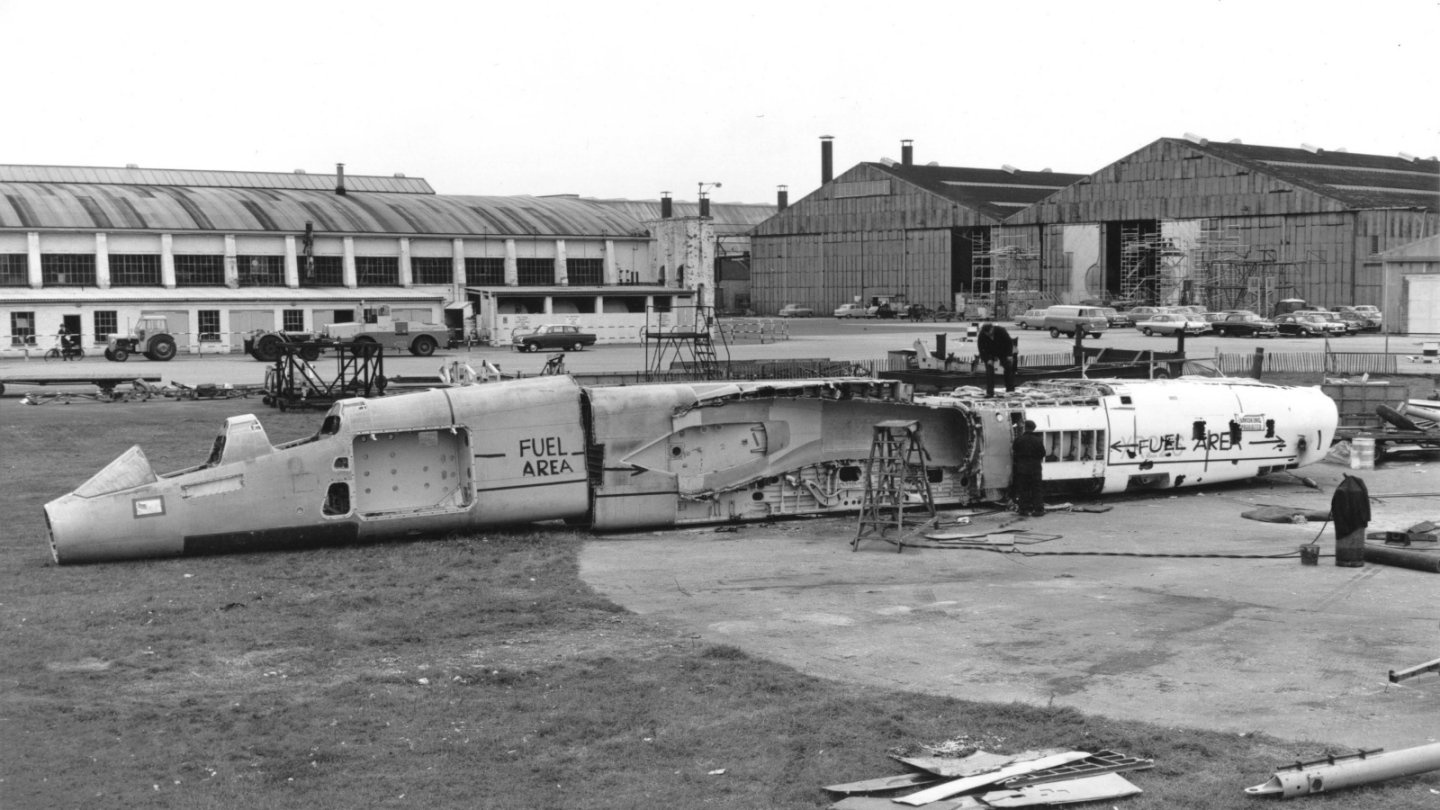