Armstrong Mitchell & Company Works at Elswick Circa 1895
When hydraulics and crane engineer William George Armstrong amalgamated with shipbuilder Charles Mitchell in 1882, they formed The Armstrong Mitchell & Company, based on a 1-mile stretch of the River Tyne at Elswick, Newcastle.
5 years later they merged again, this time with The Joseph Whitworth Company and expanded into the manufacture of cars and trucks as Armstrong Whitworth Ltd.  Joseph Whitworth had made their name through the development of the ‘British Standard Whitworth Thread’, which soon became the accepted standard for design for bolts, nuts and screws throughout the UK engineering industry.
With the war looming, in 1913 they created an ‘Arial Department’ at Dukes Moor, Gosforth to the north of the city of Newcastle. They set about producing 250 examples of the RAF (Royal Aircraft Factory) BE2c as part of a lucrative government order. The Government insisted that they recruited Dutch Engineer Frederick Koolhoven, who had formerly been Chief Designer at British Deperdussin.
His first aircraft was the F.K.1 which was first flown by the designer in September 1914.  Despite a promising start, the F.K.1 never went into production. Virtually all of Armstrong Whitworth's production during the First World War were ‘F.K designs' and by far the most successful of which was the F.K.8 ‘Big Ack’ with some 1,650 examples being produced at Gosforth. 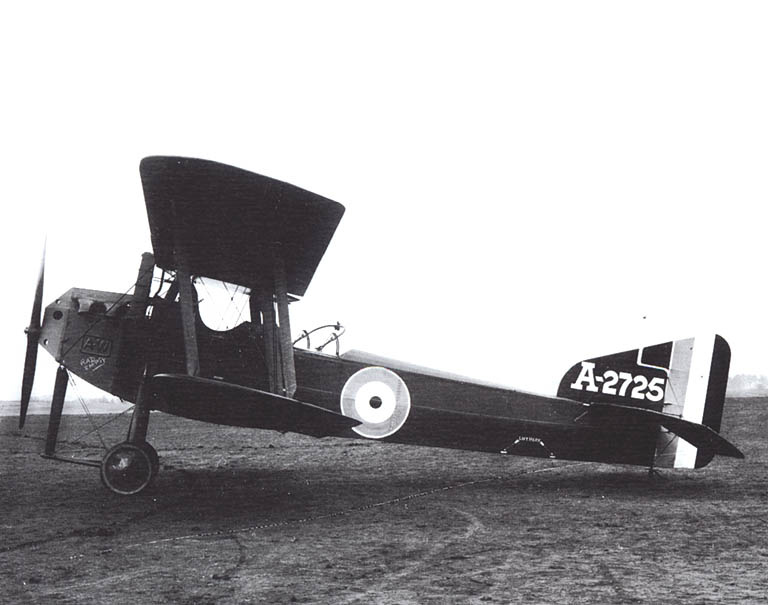 Armstrong-Whitworth F.K.1 (A2725)
Gosforth remained in use until June 1916 when it was declared unsafe and although the buildings remained, a new aerodrome was established at the Newcastle Town Moor. Armstrong Whitworth bore half the cost, thought to be around £600 as this allowed them to transfer flight testing from Gosforth and as luck would have it, a short time later the aerodrome was designated as an Acceptance Park.
After Koolhoven departed the company in 1917, and following the industry-wide fall off in aircraft orders at the end of the war, it was decided to close the Aerial Department in October 1919, with the Town Moor Aerodrome closing shortly afterwards in 1920.
A year earlier however, Armstrong Whitworth had been approached by the engine manufacturer John Siddeley, head of Siddeley-Deasy. He was keen to explore a possible link between the two concerns and in 1920, Armstrong Whitworth Aircraft acquired the engine and automotive concerns of Siddeley-Deasy, creating Armstrong Siddeley. The aircraft interests however, remained as the Sir W. G. Armstrong Whitworth Aircraft Company.
The pair of companies then formed a new consortium as the Armstrong Whitworth Development Company which it based initially at the former Siddeley-Deasy factory at Parkside, near Coventry (later occupied by Rolls-Royce Aero Division).
Later, and whilst the Design Office remained at Parkside, the company acquired the former RAF airfield at Whitley in 1923 and it was here that it would centre its major aircraft manufacturing activities.
There was a huge economic downturn at the Armstrong Newcastle factories after the end of the war, especially when the government announced that they saw 'no future for military tanks and armoured vehicles'. The Aviation Division was left largely supporting the whole group and so John Siddeley re-purchased the aircraft engine division himself in 1926. Siddeley retained his shareholding and seat on the board despite concentrating on the aero-engine and motor car business. Despite this split at the top, both the aircraft and engine concerns unusually continued to trade under their original names. .
The complexity of the company genealogy deepens further when Armstrong Whitworth Development Company was renamed The Armstrong Siddeley Development Company, in 1927.
In that same year, The Vickers Group then acquired the remaining shipbuilding and military vehicle concerns of Armstrong Whitworth on Tyneside and formed Vickers-Armstrongs Ltd (renamed with an 's' to differentiate the companies).
It should be noted that whilst at this point Vickers-Armstrongs had little involvement in aircraft, they did become Vickers-Armstongs (Aircraft) Limited when they were amalgamated with Vickers (Aviation) Limited and with the Supermarine Aviation Works in 1938. This has led to numerous errors in the reporting of the history of the companies which continues even today.
Following John Siddeley’s retirement from the board in 1935 however, Hawker Aircraft Limited bought all of his shares in the Development Company and thus took a controlling interest in all their aviation activities.
They formed The Hawker Siddeley Aircraft Company Limited although again they continued manufacturing and marketing under the Armstrong-Whitworth title. 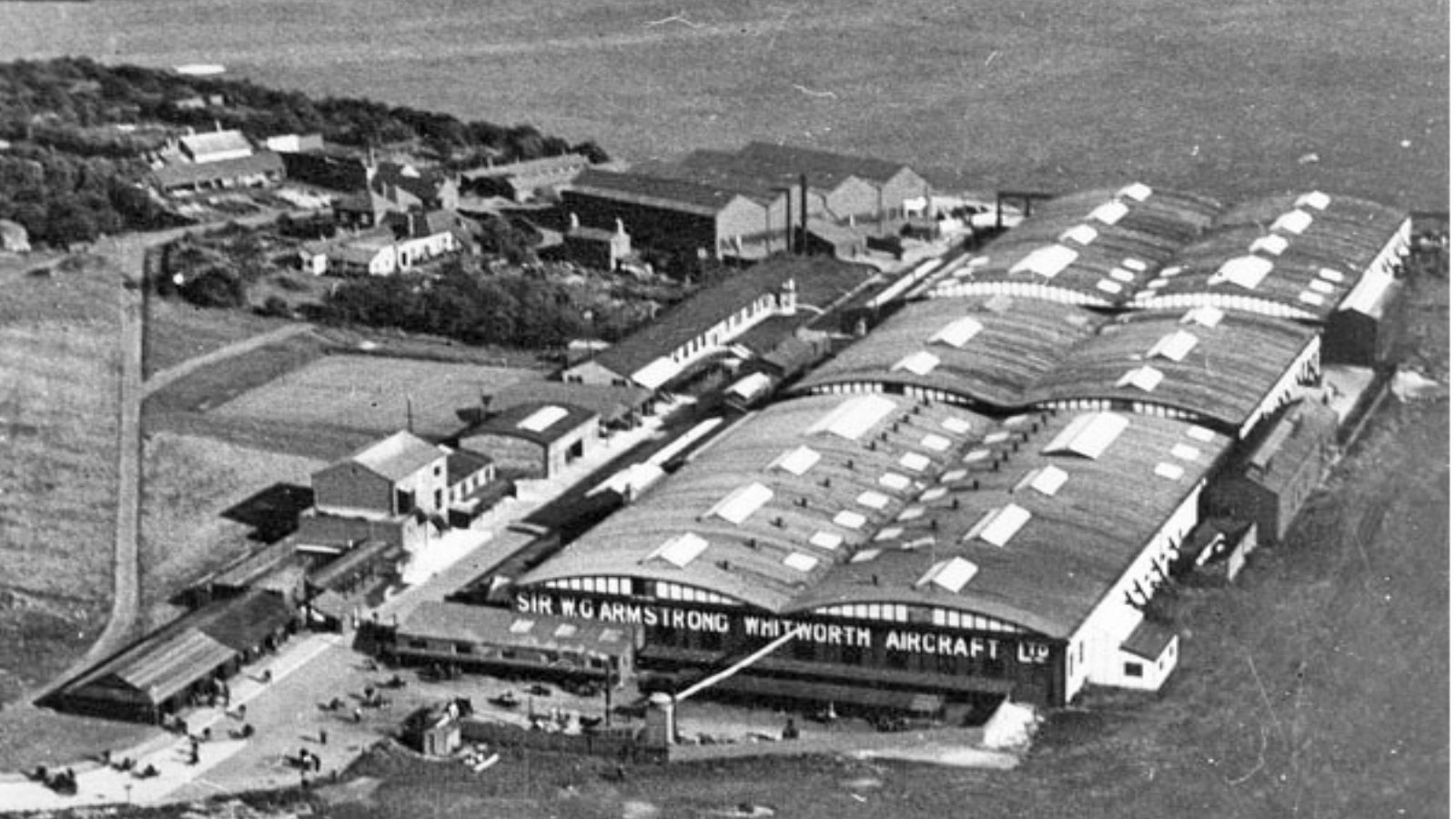 Armstrong Whitworth Works at Whitley
The Whitley factory (now Jaguar Cars) was joined by the addition of new facilities at both Baginton and Bitteswell airfields during the 1950s which were then used for the production and flight testing of small jet aircraft such as the Hawker Hunter, Hawker Sea Hawk and the Gloster Meteor for the RAF.
Gloster Aircraft Company were also to join the group in 1961 (as Whitworth Gloster Aircraft) although sadly, just 2 years later all of the famous names that had been part of the rich history of Armstrong Whitworth simply disappeared under the all-new Hawker Siddeley banner.
After 46 years, the last true Armstrong Whitworth aircraft to bear the AW designation was renamed the Hawker Siddeley Argosy.