Features First Sailors join HMS GLASGOW
Sailors who will bring to life the first of the UK’s next-generation warships, HMS GLASGOW, were given a warm welcome as they arrived at BAE Systems’ Glasgow shipyards 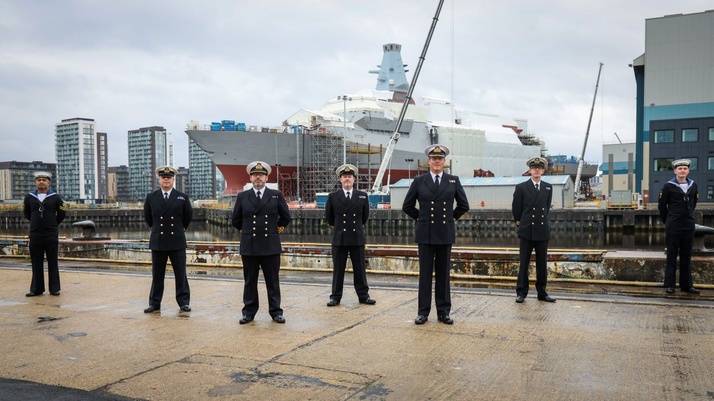 Designed and built in her namesake city, HMS GLASGOW is the first anti-submarine warfare City Class Type 26 frigate being built for the Royal Navy which will deliver critical protection of the Royal Navy’s Continuous At Sea Deterrent and Carrier Strike Group.
Working closely with BAE Systems teams, the first members of HMS GLASGOW Ship’s Company will produce the ‘operators’ manual’, which determines how HMS GLASGOW will be run, her routines, her systems and sensors, to make her an effective fighting force when she enters service later this decade.
It’s also their task to give HMS GLASGOW her soul – to set the tone for an active career of 25 years or more, building bonds with her Sponsor, affiliates such as the City of Glasgow, Army and RAF units, charities and community groups.
The ship’s company is the life-blood of a warship. With Royal Navy personnel joining HMS GLASGOW for the first time, we have reached a key milestone that will enable the engineering, administrative and organisational foundations to be established. These are necessary for a modern-day warship to function efficiently and effectively, and by starting now we can best support the build and transition into Service of HMS GLASGOW.

Simon Lister, Managing Director of BAE Systems' Naval Ships business, presented the ship’s first two junior ratings – Leading Writer Hayden Palmer and logistician Leading Hand Samuela Halofaki – with the inaugural HMS GLASGOW cap tallies as part of welcoming the first members of HMS GLASGOW Ships Company.
Leading Hand Samuela Halofaki will be responsible for making sure HMS GLASGOW has all the requisite equipment and stores aboard, as well as the supporting documentation.
“I’m delighted to have joined as the first logistics expert in the first of ship of the Type 26 class. It’s exciting to be part of the team delivering a new ship into Service in the RN and I’m looking forward to playing my part in that,” said Samuela who has already helped to bring HMS TRENT, HMS TAMAR and HMS SPEY into service.
“HMS GLASGOW will be an extremely versatile, capable and powerful addition to the Royal Navy fleet and we are proud to welcome the first members of the Ship’s Company to work alongside our teams here in Glasgow”, said Simon Lister.
“Together with the men and women who will live and work on-board HMS GLASGOW, we look forward to using our collective skill and knowledge to bring her to life completing the installation and commissioning of the key systems that will give her the vital capability to serve the Royal Navy for decades to come.”
Supporting more than 4,000 jobs across the UK, the UK Type 26 programme is making a significant contribution to the nation’s economic recovery by maintaining much-needed skills and capabilities. To date, more than £1bn has been invested across the programme’s supply chain, with more than 100 suppliers globally.
The Type 26 is the original variant of BAE Systems’ Global Combat Ship, which supports a close partnership between the Royal Navy, Royal Canadian Navy and the Royal Australian Navy. Australia and Canada both selected a variant of the Type 26 design for their anti-submarine frigate programmes, supporting greater operational, training and intelligence ties between the three nations.
Maritime Twitter