Features Commercial Active Sticks - An Active Role
For our commercial active sticks, the sky’s the limit 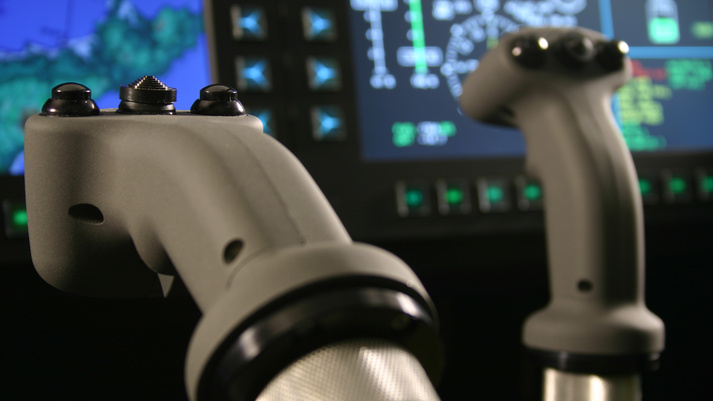 After more than 25 years making the world’s only flight-worthy “active” pilot control systems for military aircraft, we’re now bringing this technology to commercial flight decks. Active Control Side Sticks can reduce cost, improve awareness for the flight crew, and work with our fly-by-wire systems to provide tactile cueing in the cockpit, resulting in increased safety and improved performance. 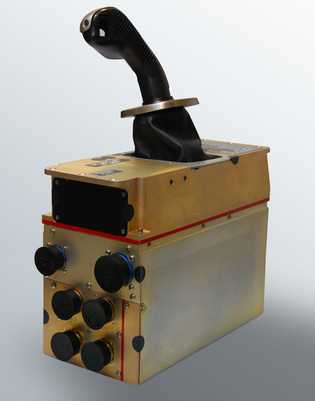 Active sticks are new to the commercial aircraft world, but these systems are already used in military aircraft; in fact, we’ve been providing them for fixed- and rotary-wing aircraft for more than two decades. They replace traditional, passive pilot controls, which use position sensors to send electrical signals to the fly-by-wire system.

These traditional systems use mechanical inceptors, which cannot affect the feel of the stick in real time, so changes to the flight envelope of the aircraft cannot be fed back to the pilot as cues, leading to no situational awareness through the inceptor feel, such as excessive bank angle or stall.

As mentioned above, active inceptors provide force feedback directly into the pilot’s hand, in real time. This force feedback may take the form of various cues to warn pilots of impending flight envelope limits, which can mean the plane is being flown unsafely. It provides an intuitive means of giving immediate feedback to the pilot and links the controls across the cockpit, so each pilot can feel the forces and see the displacements the other is causing.

This pilot linking is done electrically by the system, and replaces all the complexity, weight, and volume of mechanically linked passive inceptor systems. The result is increased safety and crew coordination in dual pilot situations, which may eliminate industry concerns over dual pilot inputs in passive inceptor-equipped aircraft.

BAE Systems is the world’s only provider of flight-worthy active inceptors, with more than 25 years of design experience in active stick technology.

Civil active control side sticks, designed and manufactured at our Rochester, UK, site will hit the skies in 2016. Our legacy of active inceptor experience provides a highly developed and low risk solution for commercial airlines.

What we’re offering is a safer, more coordinated piloting solution for commercial air travel. We believe active control sticks will become the future standard of flying, due to this advanced safety.

The integration of flight control functions enabled by active side stick controls will not only increase safety, but also the performance of the aircraft. The intuitive feel, simplified control laws, and cueing will revolutionize the cockpit of the future -- with BAE Systems at the controls. 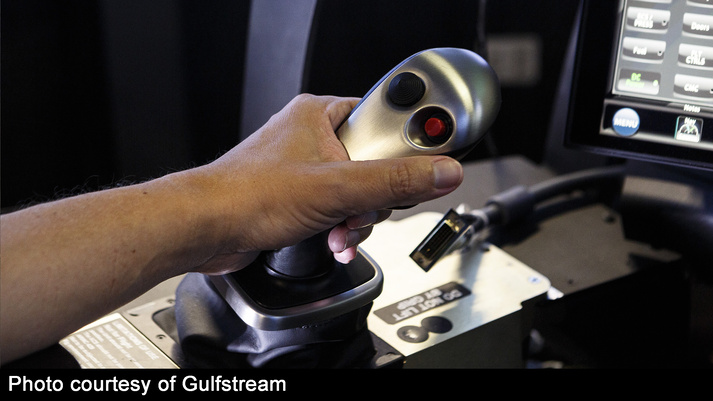 The technology is making its commercial debut onboard Gulfstream’s new G500 and G600 planes, and the response has been overwhelmingly positive in the industry.

I’ve sampled the capabilities of BAE’s active side sticks in Gulfstream’s G500 engineering mockup in Savannah. I’m sold. If it were up to me, I’d mandate that all new FBW airplanes with side sticks be upgraded to active inceptors as a condition of type certification.

Pilots flying with active side sticks respond positively to the linking in the cockpit, and the precise and easy control afforded in the design. For many commercial pilots who once flew military missions, the advancement of this technology to commercial cockpits is welcome.

The use of side sticks in aircraft cabins has long been a matter of better ergonomics for pilots. Moving the control stick off to the side allows for larger flight displays and for pilots to sit closer to them.

“When you move the sticks to the side, you allow for touchscreen panels in the design of the cockpit,” said Taylor. “A more comfortable cabin that’s easier for pilots to fly is always a goal in the advancement of aircraft design.”

As the market demand for these active sticks increases in civil airspace, competitors are bound to unveil their own active stick systems. But with more than two decades of design experience and BAE Systems’ sticks already flying aboard the F-35 and T-50, with the  KC-390 and G500 / G600 launching soon, it’s clear that experience matters. Our sticks meet the highest levels of reliability and integrity for both military and civil applications, providing full stick-to-surface capability for the aircraft of the future.