Client Conversations
Insights Features Client Conversation: An Australian IT health check
In the short time Andrew Macfarlane has headed up IT for one of Australia’s largest regional health services and consortia he’s had to deal with a major cyber breach swiftly followed by the enduring impact of the pandemic – but he remains undaunted. He tells Annette Costello about turning crisis into opportunity. 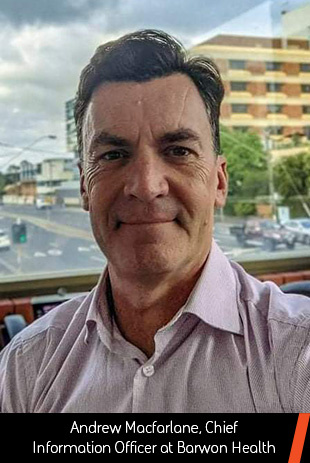 For someone who’s been fighting fires ever since moving into healthcare a couple of years ago, Andrew Macfarlane cuts a relaxed figure in what was initially a worryingly barren workplace.
Maybe it was the time of our chat – which took place about 7pm – or the fact it transpired that his team were finally moving office the very next day, a process long delayed by the pandemic. Or maybe it was just down to broader circumstances: Macfarlane’s job may be the definition of high pressured, involving the cyber security of hundreds of thousands of patients across 60,000 square kilometres, but he displays no visible sign of stress and strain.
So, what’s his secret?
“I’m doing something that really matters for my community,” he says. “Sometimes it can be overwhelming but it’s also incredibly rewarding. Sure, I work long hours, but that’s only because it really means a lot and healthcare is something I really wanted to get into.”
Get into it he has, and despite enduring anything but an easy ride over the past couple of years it remains a true labour of love. If anything, being at the heart of the action is exactly how he likes it. 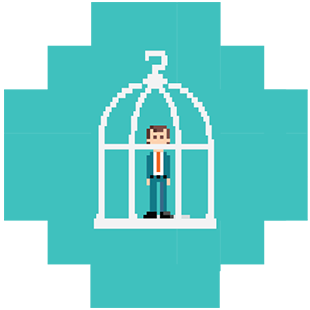 Macfarlane is based in his home town of Geelong, a city which is about 70 kilometres south west of Melbourne. It’s from there that he now wears two hats: CIO of both Barwon Health, which is one of the largest regional health services in Australia, and the South West Alliance Of Rural Health (SWARH), a consortia of public health agencies connecting all public acute hospitals and associated health services in the region.
As we speak, Australia’s rolling state-wide lockdowns are starting to lift, with further chinks of light materialising in the form of rapidly increasing vaccination numbers which will hopefully cement the return of something like normality. Time will tell. Whatever happens, Macfarlane is clear that being in and out of lockdown for a sustained period has brought its own eclectic challenges.
“Regional Victoria has been treated a bit differently to the major metro areas,” he says. “We’ve not been in lockdown as much, but it’s been disruptive in the sense that every time we’ve tried to organise something there’s been another lockdown around the corner. So it’s been really hard to plan – our delayed office move being a case in point.”
Like his counterparts in organisations around the world, he has had to rapidly adjust to mass working from home, the need to source numerous laptops, and manage all manner of services remotely rather than in person – “I’ve really missed that as it makes it harder to get stuff done.”
Interestingly, when asked what he knows now that he didn’t at the start of the pandemic he prefers to point to the experiences of other governments and health systems.
“The early days of Covid were such an unknown but we had the advantage of seeing what was coming from overseas – this helped us with our business continuity planning and risk assessments.”

“Here in Australia the numbers have always been the focus. Every time you turn on the news or click open a news story, there has been this absolute obsession with not letting these numbers get out of control and I think it is the same in New Zealand. Maybe it’s something about the psyche here but we’ve just never accepted it at all.” 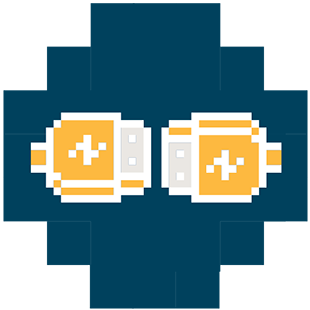 To successfully navigate the unchartered waters of the pandemic, Macfarlane was able to draw on his 30 years-plus experience of working in IT, albeit in a different sector entirely.
“I spent most of my career in retail, starting in software development before moving into management roles and ending up as head of corporate systems for a department store chain,” he explains. A stint at a services company then followed before he started work as Director of Technology and Communications at Barwon Health, before being promoted to interim CIO after the incumbent moved on.
Macfarlane believes that coming afresh into healthcare has actually proven to be quite a blessing. “I like to think I can come in and perhaps bring a different way of thinking and new approaches,” he says.
“For example, I think there is scope for improvement in terms of systems. In retail, the focus is all on the customer – it was drilled into us from day one – but in health care this is more of a recent trend. So rather than looking around the world, I’m perhaps thinking about other industries and how their approaches can apply to healthcare.”
Unfortunately, events soon intervened.
Barely a few months after Macfarlane assumed the CIO role, Barwon was the victim of a successful cyber-attack which also massively disrupted the work of SWARH by preventing access to key systems across different hospitals and health services. Having spearheaded the recovery efforts, Macfarlane was subsequently made the permanent CIO of Barwon and was also given the same role at SWARH – “I love the fact I get to do both as the great advantage is that there is now just the one strategy and one approach.”
He goes on to admit, however, that he is well aware this career-defining opportunity came about as the result of a disaster, the largest in Victorian government history, but in a strange way it helped galvanise his colleagues from day one.
“It was hard in that I was taking over a team who was thinking ‘who are you to take over this team?’ but I was lucky that they were all incredibly responsive and united in getting through the event.  Stepping into a team I didn’t properly know and an environment I wasn’t yet sure of and then coming out of that stronger and charting a new strategy well, speaking personally, what more can you ask for – it sounds terrible but having that defining purpose and the power to get stuff done was the best time in my career.” 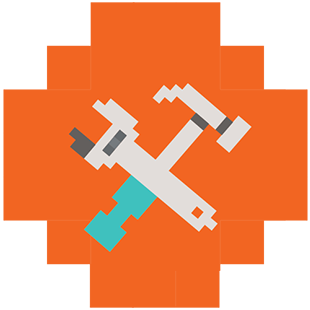 Looking back at the cyber-attack from the safe distance of a couple of years, Macfarlane can reflect on the fact that the response has successfully addressed many vulnerabilities and is continuing to reshape both Barwon and SWARH’s operations for the better. It’s not always been easy, however.
“You hit a point where everyone is fatigued and it’s actually a really hard slog,” he concedes. “Being able to motivate people and keep everyone focused was vital. You have to have the grit and tenacity and make sure your communication is on point, both to your team but also to clinical leaders who want updates, so they are kept aware of all the challenges you’re facing.”
He goes on to say that the attack has acted as the catalyst to a whole range of governance reforms aimed at strengthening systems and better securing their defences.
“Victoria’s Department of Health has been very strong in supporting us but it’s just been a real awakening of where we were and where we needed to be,” he explains. “So in some ways it’s horrible but it also strengthens you – a lot of our policies we’ve introduced since the attack just didn’t exist before. So we have really re-done our whole governance around the organisation. I’d like to think that since the attack, the work we have done has meant we are in a much stronger position.”
The attack also led to a reassessment of their day-to-day work and how that can be balanced against the cascading needs of effective cyber defence – which is not always straightforward.
“There’s always that tug of war in healthcare between clinical outcomes and system security,” says Macfarlane.
“For us, things had perhaps gone a little too far in terms of flexibility and so we have had to wind that back. But what it also did was give me the leverage from an IT sense to give the systems a little more teeth – we could use the example of the attack to as an explanation as to why we needed to change things and put in these additional controls.” 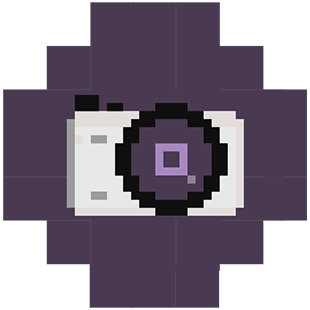 The cyber-attack and the pandemic have understandably dominated Macfarlane’s horizon over the past year or so. However, the business of healthcare continues unabated – from keeping the lights on to ensuring there are sufficient chargers in every ward to making sure emails arrive on time. He admits that this work isn’t the sexiest but that doesn’t mean it isn’t hugely significant – particularly when it comes to the overall patient experience.
“In my role you want to do the real aspirational stuff and the big digital changes such as the move to the cloud but a lot of it is just doing the basics really well,” he says.
He goes on to say that one challenge is that sometimes different hospital wards appear to have different processes in place. “In our biggest non-metro hospital each ward feels as if they have their own system, so ensuring their basic IT needs are met is always a challenge.”
“My top goal has been to try and build some fundamental strategies and explain why it is important to create good solid platforms. Right now, we support over 800 applications and have lots of big digital programmes that we’re kicking off, we’re doing lots in the collaboration space, and cyber is part of everything we do – it’s got to be security by design.” 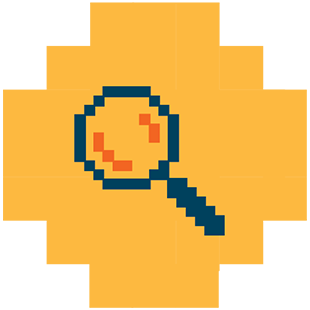 Having worked with Macfarlane for about a year, it’s safe to say that his relaxed persona belies the myriad of pressures bombarding him from all directions. Although a constantly pinging cell phone attests to his perpetual juggling of priorities, his approachability and level-headedness have remained constant. Perhaps it comes down to the simple truth that, after 30 years in the IT business, he has found his dream job.
“Clearly, I wouldn’t have chosen Covid – one disaster and then going into another wouldn’t be anyone’s choice – but I genuinely love what I’m doing,” he says, breaking into smile. “People in health tend to have their heart in the right place – they want to help people and provide the best possible service – and I’m proud to be standing alongside them.”
Combine this passion for public service with his evident excitement about current projects and it’s easy to see that the future is shaping up to his liking.
“We’ve got a lot of ageing network equipment so we’ve got some major programmes underway,” he says. “We’re also fundamentally upgrading our electronic medical record and this will happen over the next two to three years. Cyber will also be a full focus of ours – we have to keep the pedal down – but there’s also the challenge of uplifting digital maturity and understanding across the region, so there’s a lot of cool stuff going on.”
Going forward, Macfarlane is also on a mission to showcase the sheer value that IT can bring – the importance of their advice and strategic counsel. “I want us to be proactive and instrumental in ensuring that everyone in our spread out and diverse community has equity of service, even in our remote areas.”
It’s a noble mission, one that will demand dedication and ingenuity, flexibility and expertise. While few would bet against him, let’s hope that another cyber-attack and pandemic don’t ricochet back any time soon. We’d all benefit from some quieter times ahead – Macfarlane included.
About the author
Annette Costello is a Principal Cyber Security Consultant at BAE Systems Applied Intelligence. annette.costello@baesystems.com