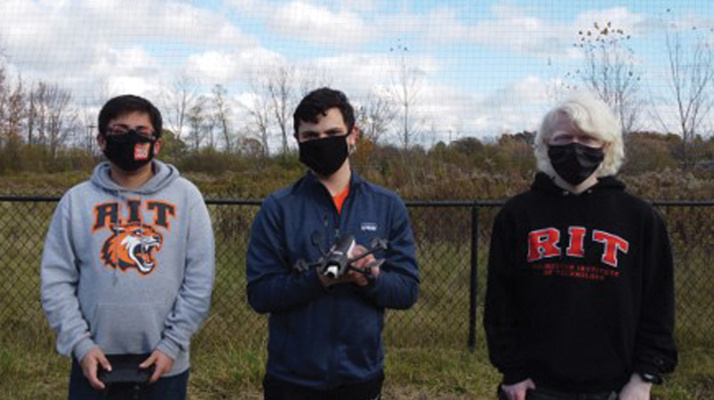 The theoretical problem of the traveling salesman

In technical fields like computing, there are what’s referred to as “classically hard problems.” These problems put forth a scenario and ask for a specific solution. While many are deceptively simple, mountains of research have gone into effectively solving them.

One such problem is known as the “Traveling Salesman Problem,” which goes something like this:

Given a list of cities and the distances between each pair of cities, what is the shortest possible route for a traveling salesman to take such that they visit each city exactly once, and return to the origin city?

Now, there are slow, methodical ways to solve this problem, but what if you’re on the clock? What if you need a plan to solve it quickly, and there are lives on the line?

These are the kinds of problems that our autonomy teams at BAE Systems’ FAST Labs™ Research & Development organization tackle every day. The team seeks not only answers to questions like the Traveling Salesman Problem, but fast, autonomous solutions that can accomplish the mission effectively. Why? Because autonomous systems that can quickly and effectively plan, route, and respond in a mission could make all the difference when it comes to saving warfighters’ lives.

From theory to reality

While a traveling salesman may never actually have to execute on such a challenge, very similar problems must be acted upon in the real world. One scenario could be finding a missing child in a vast, concealed area. The mission is to locate the child before anything bad happens – meaning, as quickly and as accurately as possible. How do you leverage autonomous software to effectively search the area and locate the missing child – fast?

This was exactly the problem FAST Labs researchers brought to a team of bright students at Rochester Institute of Technology this past academic year. Believing that the next generation of researchers will develop the next generation of disruptive solutions, FAST Labs’ Autonomy, Estimation, and Control team engaged three RIT students in a senior capstone project around the following problem statement.

A child wandered away from home and, after a frantic search, we tracked them to a large cornfield. Unfortunately, we are no longer able to easily track them within the field. We need a system where a swarm of drones can quickly and efficiently search the field and find the missing child. These drones need to be able to collaboratively and autonomously search the area, and then communicate their status and end success to an operator.

With the problem statement in hand, the team of three RIT students – Tyler Baldwin, Dominic Calabria, and Jacob Wood – spent the academic year working through the problem with the support of a faculty coach and Principal Software Engineer Daniel Wallach, a FAST Labs team member who served as the students’ “customer” for the project. Meeting with BAE Systems weekly, the students employed their software engineering chops and creative ingenuity to design a flexible software architecture that met the challenge. Their aim was to develop a search-and-rescue system in which multiple drones, equipped with onboard, autonomous mission software, could collaborate to quickly and efficiently search the area and find the child.

There were several factors the students had to take into account:

Throughout the 2020-2021 school year the students conducted 11 flights to test the full system workflow, many of which included two or three drones working together in concert. In the final flight test, the students successfully demonstrated core tenets of the autonomy challenge including area distribution, path planning and execution, and dividing and redistributing the assignment of a downed drone. In the end, the students achieved impressive results. The operator was able to draw on a map where they wanted the drones to search, pull up live footage from each drone, and receive alerts when the drones identified an object or other article of interest.

“The students did a fantastic job taking a hard problem with no stated solution and bringing it all the way to a flying system in just half a year,” said Wallach. “They had to navigate not only all of the engineering concerns, but also various pop-up, real world issues like designing test events.”

Tackling this integrated software/hardware challenge brought real-life application and missions to the students’ in-school experiences. “The most valuable part of the project was that I was able to apply my software engineering skills to a topic that was not taught in our software engineering curriculum,” says Baldwin. “In addition, it was important for me to learn how I can integrate software and hardware together.”

The technology these students developed could extend far beyond the lifetime of this project. Because they created a modular hardware interface to control a drone, it has the potential to be applied and tested for different types of vehicles, environments, and missions in the future. For example, it could be used to search for an unmanned undersea vehicle deep down in the ocean. Modularity and flexibility are key to autonomous systems of the future, and these students delivered these critical features in spades.

While the missions that FAST Labs researchers tackle may vary from the specific problem put forth in this scenario, the underlying concept is the same: Leveraging autonomous technologies to quickly and efficiently execute saves lives, no matter the application.