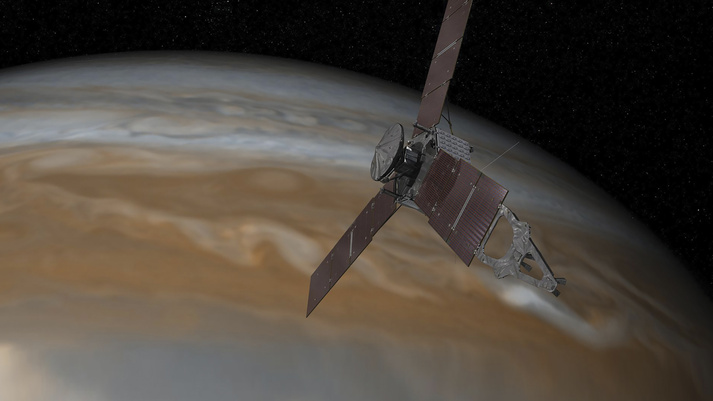 Employees, families and friends marvel at recent headlines of Juno reaching Jupiter. BAE Systems employees are at the heart of the mission.

The Juno spacecraft arrived at Jupiter on July 4 – the second long-term mission to reach this planet – to study the gas giant’s weather, magnetic environment and formation history.

At the heart of this trip to Jupiter is a team of about 20 BAE Systems Electronic Systems sector employees and its RAD750® single-board computer.

“To see a computer that I was leading the assembly and delivery on here in Manassas go through ground integration and survive the harsh environments of launch and space travel, and then see it in orbit around Jupiter, is amazing,” said Russell Shillingburg, RAD750 program manager. “It’s great to know that I was part of something that is increasing our knowledge base of space and helping space exploration – something that’s making headlines in history. Never in my life would I ever have thought I’d be a part of something like this!”

“It’s surreal seeing photos from Juno and knowing that I worked on this mission,” said Sarah Babcock, RAD750 component engineer from Manassas. “Very rarely do we get to see the final product in person. It definitely brings reality to what we do on a daily basis.”

RAD750 is Juno’s main computer, operating at 132 megahertz with 128 megabytes of DRAM local memory. It was built to withstand Jupiter’s intense radiation – 20,000 times stronger than the Earth’s magnetic field – and tremendous gravitational pull – the spacecraft has traveled at speeds of more than 150,000 mph, making it the fastest human-made object ever built.

“Our standard design met their mission,” said LeeAnn Raczkowski, RAD750 chief engineer in Manassas. “We assume the worst and hardest mission initially and then customize each computer for the program and the mission. I’m confident that our processor will exceed the mission.”

For space missions, ES’ products are the first components to be procured. Parts onboard the craft adhere to strict quality requirements and endure rigorous testing; RAD750 was tested to ensure it could survive the extreme temperatures and vibrations associated with its journey.

“The time lapse is typical for us on the space side,” said Raczkowski. “The processors are the first thing customers procure for the boxes in the satellite. So, this was average or quick. It’s exciting to see what you’ve worked on finally make it to its mission.”

Added Babcock: “When we’re working on contracts – as a second- or third-tier supplier – it can sometimes take 10-plus years before we see the results of our work. We are the base of the mission. We worked on small components going onto a circuit card assembly board that gets integrated onto something bigger and then something even bigger yet.”

The mission plan involves 37 orbits, and Juno is scheduled to deorbit in February 2018.

ES has a 25-year legacy of providing radiation-hardened products that can withstand outer space’s harsh environments. The sector’s products have more than 8,000 years of flight time in all Earth orbits and deep space. ES has delivered more than 750 radiation-hardened computers that are currently operating on more than 250 spacecraft and powering more than 50 missions.