Salute to Our Partner: Tragedy Assistance Program for Survivors 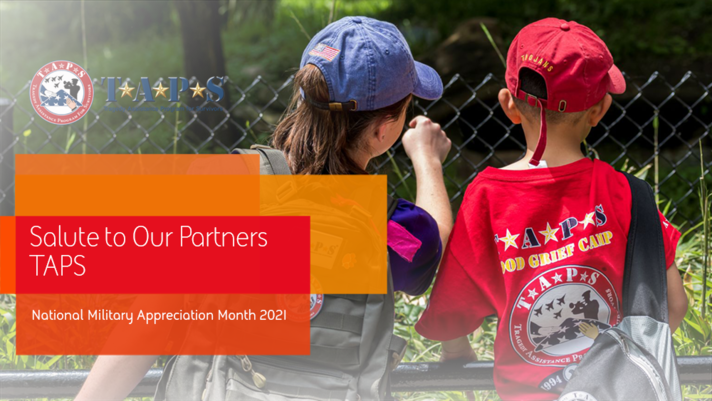 Tragedy Assistance Program for Survivors (TAPS) is the national nonprofit organization providing comfort, care, and resources to all those grieving the death of a military loved one, regardless of their relationship to the deceased or the circumstances of the death.

BAE Systems has been a consistent partner with TAPS since 2008. That includes funding, volunteer support, and sharing our mission with military survivors so they can connect with TAPS.

What inspires your organization to do what you do? / How do you support our military?

Our nation has a history of honoring those who have died in defense of freedom. We have a national day of remembrance on Memorial Day, and national shrines maintained by the government to bury our military dead. Yet there had never been an organization in the United States to care for all those left behind when a military member or veteran dies, expanding the care beyond the rendering of final honors, interment of remains, and administration of benefits to those deemed eligible by the government. In 1994, that changed when TAPS was founded to fill the gap in service between what the government provides and what any other private organizations were offering for families. Since its founding, TAPS has had the support of every Chairman of the Joint Chiefs who recognize the national security implications of providing expanded care to surviving military/veteran families. This care is seen by all who serve and have served as the honor of our nation in recognition of their service up to and including the ultimate sacrifice.

What is the most significant need you are seeing for military families right now?

TAPS carefully tracks trends regarding the manner of death. For example, the 7,583 of newly bereaved families who came to TAPS in 2020, nearly an equal number (30% each) lost loved ones to illness and suicide. These circumstances of death bring additional complications, whether coping with the trauma of a death by suicide or redefining life after being a caregiver and now a survivor. The most significant need we see now are specialized programs of support, including emotional support services for complicated grief and trauma.

How can people get involved with/support your organization?

We do all that we do - the Helpline, the camps, the retreats, the resources, the care team, the services for over 100,000 surviving family members of America’s fallen heroes – at no cost to the survivor, the taxpayer or the government. For those that are able to support TAPS, please make a donation at TAPS.org/Donate. For other ways to become involved with TAPS, visit TAPS.org/support.