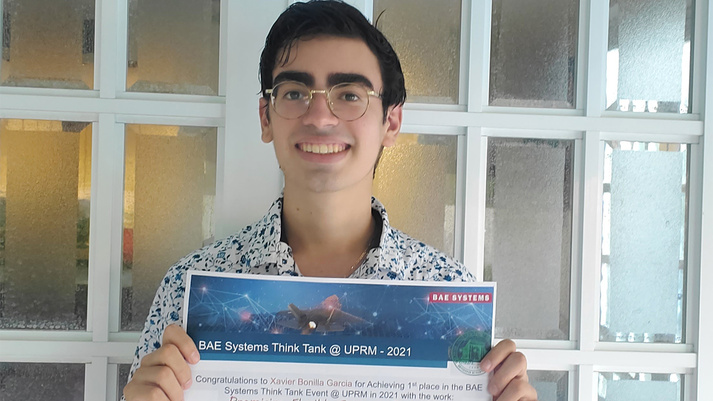 When Maria Abreu Sepulveda joined BAE Systems’ FAST Labs™ research and development (R&D) team, she found ample opportunity to bring her research ideas to life. As the leader of the Laser Systems team, she empowered her team members to design and deliver novel laser applications for defense systems. In a very short time Maria’s team was able to expand into a new customer base, new technologies, and new application areas.

But when she reflected on her own upbringing in Puerto Rico and how she navigated her career – from studying physics at the University of Puerto Rico (UPR) and paying for her PhD through fellowships and grants, to eventually finding her role at BAE Systems – Maria felt there was more that could be done to expose students from communities like hers, to what is possible in the world of defense R&D.

“When I was 13 years old, it just so happened that a professor from the University of Puerto Rico stopped by my father’s farm in Yabucoa, Puerto Rico,” said Maria. “He invited me to visit the physics department, and from just those few visits and interactions, my career in science was launched. Three years later, I was enrolled at UPR as a physics major.”

After moving forward to receive her PhD, Maria worked to gain experience with government programs and their areas of interest, determining how to use her scientific and leadership knowledge to support the mission of the Department of Defense (DoD). This led Maria to launch her career at BAE Systems.

While Maria’s path to defense R&D was somewhat happenstance, she believed that she and her peers in FAST Labs could more deliberately make connections for students in Puerto Rico, and show them how science can and must make a real difference in the defense industry. In the fall of 2021, Maria launched a BAE Systems Think Tank project in partnership with the UPR-Mayaguez campus, where a core FAST Labs team solicited whitepapers for solutions from UPR students in five technical areas: electrification, lasers for underwater communications, materials for electromagnetic shielding, cyber operations, and institutional knowledge management.

After a Zoom kick-off session, where interested students could understand the Think Tank challenge and ask questions of the FAST Labs team, the students went to work to develop proposals for their ideas.

“On top of assessing and proposing unique science solutions, we wanted the students to understand what an idea might cost and how to pitch it to get funding – essentially, how to ‘capitalize’ science,” said Maria. “My colleagues and I have all had to learn how to develop market studies and financial assessments, because that’s how a research idea becomes something tangible. When someone funds your concept, that’s how you get to see it come to life,” she continued. “But the financial side of research is something that often isn’t taught, so we wanted the students to get firsthand experience with that.”

In November 2021 each student team presented their whitepapers and cost analyses to a panel of FAST Labs judges, and two student groups were awarded cash prizes for their novel approaches. Xavier Bonilla Garcia won the first place prize for his paper, Promising Flexible Battery Technology. Xavier’s whitepaper analyzed various flexible battery options that could become game-changing wearable technologies, and which options would be most viable for use in future commercial and military products. From carbon fiber batteries to origami batteries, Xavier assessed the opportunities and challenges for each and provided evidence for the open research paths that could be further explored around this technology.

"I entered this competition with the intention to learn more about the business side of research. Through this experience I managed to gain valuable insight into how a whitepaper is made and used to communicate ideas with more in-depth analysis. This has been an amazing experience that has given me confidence to explore careers in the industry."

Teammates William Garcia Rodriguez and Andres Saavedra Ruiz took the second place prize for their concept, Flexible and Wearable High Energy Density Battery. Their proposal introduced graphene as a novel material that could revolutionize wearable batteries and energy storage, and in particular offered laser scribed graphene as a simple, flexible, and scalable manufacturing process by which the material could be manufactured for power and biosensing applications. Their paper also assessed various companies in the space who might display interest in funding their idea.

“It was impressive to see the tenacity with which these students approached the Think Tank challenge,” said Rob Nichol, a member of the judging panel and technology development manager at BAE Systems’ FAST Labs. “They explored solutions that are not just impressive in terms of the scientific approach, but are also connected to real, tangible problems that the defense industry faces.” 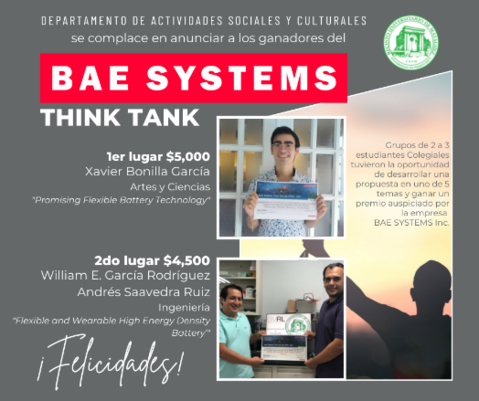 “Sometimes understanding the research opportunities that are out there, and connecting with those like you in a field you may not be familiar with, is all it takes to put you on your career trajectory,” said Maria. “We need to continue to cultivate our future researchers – especially in communities we may not usually reach – to show these young people what’s possible in the world of defense R&D. This Think Tank was an actionable starting point to provide early exposure for UPR students. We look forward to growing this partnership with UPR, and to potentially replicating this project with more universities and student groups in the future.”