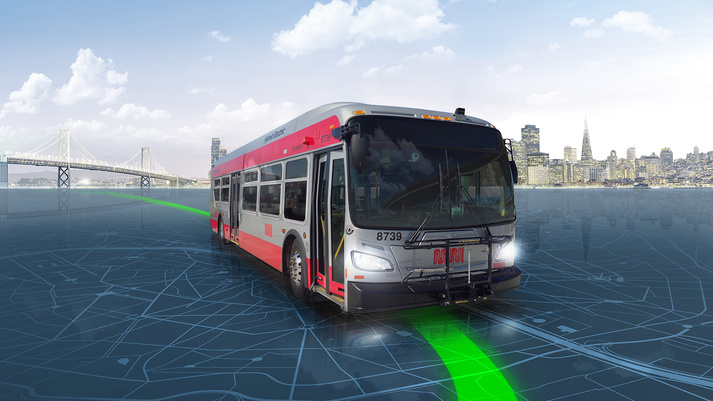 Around the world, more and more cities are striving for a future with zero emissions. Transit agencies are now turning to a cleaner bus fleet in an effort to reduce carbon emissions, improve air quality, and create a quieter ride for passengers.

For cities ready to take that first or next step, BAE Systems is here to assist each stage. San Francisco recently announced the launch of a battery-electric pilot program, an evaluation process using multiple bus manufacturers in the city’s operating environment, and includes the company’s all-electric propulsion system.

While the destination may be clear, the path to zero is rarely the same. In San Francisco, the journey started over 20 years ago with the help of BAE Systems’ electric drive technology. The Golden City led the way with electric-hybrid buses, and is now gearing up for an all-electric operation.

Plotting a course and keeping it green

In 2001, the San Francisco Municipal Transportation Agency (SFMTA) received its first set of electric-hybrid pilot buses, powered by BAE Systems’ electric drive systems. The initial order not only laid the foundation for a zero-emission fleet, but also signaled the start of a collaboration that would still be delivering innovative clean air solutions 20 years later.

“SFMTA is proud to be a leader in addressing the climate crisis,” said Julie Kirschbaum, SFMTA Director of Transit. “We’re committed to embracing the greenest fleet possible and getting people out of private vehicles and into more sustainable modes of transportation.”

The Series-ER system further aided San Francisco in its quest for reduced emissions using “green zones” throughout the city. The buses use GPS-enabled geofencing to switch to battery power when entering through the designated zero-emission zones, which aim to foster environmental justice in communities most affected by air pollution.

As the demand for lower emissions in transit has advanced, so has our technology, adapting to the progression of the market without interruption to the timeline. Today, SFMTA has more than 300 buses running on BAE Systems’ power and propulsion solutions.

“Starting with electric-hybrids, the consistent collaboration with BAE Systems has helped develop our workforce to be prepared for the transition to zero-emission bus technology,” said Gary Chang, Manager of Transit Fleet Engineering at SFMTA. “San Francisco is a leader in environmentally sustainable transportation and is proud to operate one of the greenest fleets in the country, which includes cable cars and electric trolley buses. We’ve always had a path to zero emissions and a battery electric bus fleet is a major part of that mission.”

The Series-EV system – one of two zero-emission options offered by BAE Systems – features next-generation power electronics technology that uses fewer, lighter, and more compact components. Its lightweight and reduced number of connections make it easy to install and pave the way for buses to travel longer distances on a single charge.

While Series-EV will soon arrive in San Francisco, the all-electric system is already making an impact in other parts of the globe, including cities like Milan and Paris. In North America, cities such as Vancouver and Milwaukee are set to implement the product into their first round of battery-electric buses, laying the groundwork for an all-electric fleet.

As global-warming greenhouse gases continue to rise, the heat is on for cities to curb harmful emissions with clean technology. With 25 years of expertise, BAE Systems is on a mission to help transit agencies get to zero, offering both low and zero emission solutions to chart a course to a sustainable future.