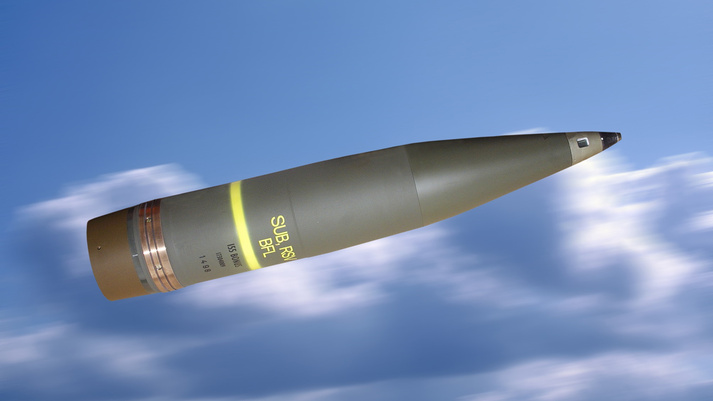 The U.S. Army is adding BAE Systems’  Bofors 155mm BONUS ammunition to its arsenal, through a contract with the NSPA (NATO Support and Procurement Agency).
Already qualified by the Army, the latest version of BONUS defeats heavily armored targets and can be fired from any 155-millimeter artillery system, including M777 lightweight towed howitzers and the M109 self-propelled howitzer family of vehicles.
BONUS is significantly more capable than traditional munitions because it carries two smart munitions that employ advanced sensors, enabling each to independently seek out and destroy separate targets within a radius of 32,000 square meters. Because each BONUS shell carries two smart munitions, its mission success per round is significantly better than with traditional ammunition.
“The proven reliability and mission success of BONUS make it an ideal solution for the U.S. Army as it continues to invest in advanced technological capabilities for its forces,” said Lena Gillström, managing director for BAE Systems’ Weapon Systems business in Sweden. “This contract furthers our position at the forefront of innovation in delivering smart munitions to the current and future battle space. The U.S. Army is now joining a number of international counterparts deploying this munition, as interest in BONUS continues to grow worldwide.”
Developed and produced in cooperation by BAE Systems in Sweden and Nexter in France, BONUS is produced at the BAE Systems facility in Karlskoga, Sweden, with significant component deliveries from Nexter. The NATO Support and Procurement Agency provides integrated multi-national logistics and procurement support solutions under a single organization for NATO allies and partners.
Work under this contract will begin immediately, with deliveries scheduled to take place through 2020. In addition to the United States, several other countries operate BONUS, including Finland, France, and Norway, and Sweden.
Ref. No. 129/2018
Contact