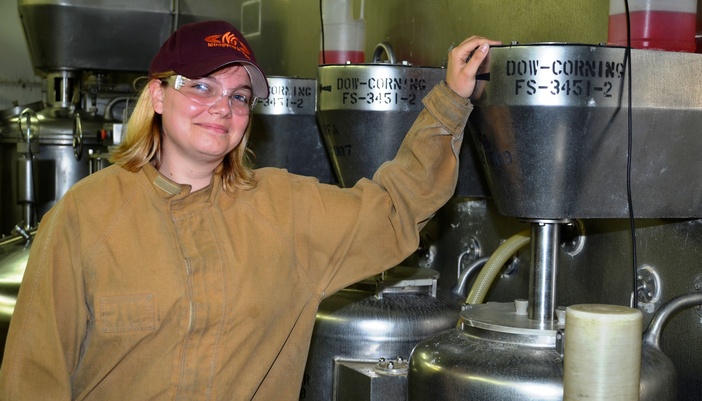 Kimberly Meuer, Nitroglycerin Production Manager at Radford Army Ammunition Plant, reflects on her journey to becoming an engineer, and what’s led to her success.

Talk about humble origins. For much of the propellant used in U.S. military munitions, the journey of creation begins with animal fat.

“It’s a cool process from start to finish,” said Kimberly Meuer, nitroglycerin production manager at Radford Army Ammunition Plant in Virginia. “We start by ‘nitrating’ glycerin, which is a natural element that comes from animal fat. This involves mixing it with different acids, turning it into nitroglycerin.

Meuer gushes with pride when describing Radford’s nitroglycerin production and waste powder processes. After all, the facility is among a handful performing such work, and the only one in North America providing nitrocellulose and high-volume production of solventless propellants.

“The propellants we manufacture are extremely sensitive,” said Meuer. “For example, a drop of nitroglycerin will detonate if a hammer is dropped on it from three centimeters above. It takes between nine months to a year of training to become a production operator. My operators are my pride and joy, and when visitors tour the plant, I love to show off the amazing talent and expertise here.”

Meuer has worked at Radford for six years, but it could be said her propellant path was launched during childhood.

“Both my parents worked in technical fields,” she said. “As a kid, I loved being in offices filled with rulers, charts and sketches, and intricate computer programs. By age 5, I knew I wanted to be some sort of engineer.

I became interested in chemical engineering during high school chemistry classes,” Meuer continued. “I liked seeing how different chemical compounds worked and reacted with each other. For example, you can see a candle burn, but chemistry shows you how and why it burns.”

After earning a bachelor’s degree in chemical engineering, Meuer soon joined the Radford team, steadily rising through the ranks to her current job. She credits her success to listening to customer needs, being decisive and paying attention to the “big picture,” and, most important, caring about her employees.

“The most rewarding part of my jobs is helping my employees develop and reach their full potential,” she said. “My employees are like family – we support each other as we reach our professional goals.”