Please note: The Vickers Supermarine Spitfire is probably the most famous of all British aircraft and deserves much more space and detail than can be afforded on this web page.

Whilst we identify some of the basic elements of this iconic aircraft, we urge further interest via the numerous books and websites that describe the type’s design and development such as Jeffrey Quill’s autobiography 'Vickers Supermarine Spitfire: A Test Pilot’s Story' which provides an excellent starting point.

There are a number of both airworthy and display aircraft listed below whilst the Vickers Supermarine Seafire developments are presented on a separate page. 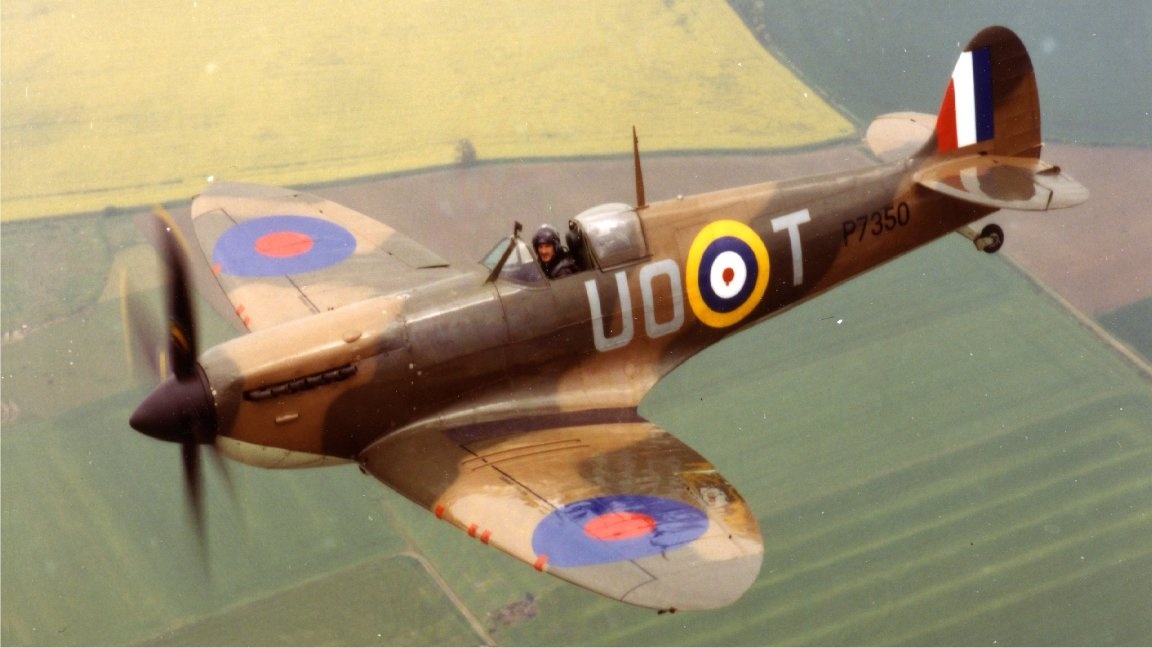 Supermarine Spitfire MkIIa (BBMF)
The Vickers Supermarine Spitfire, designed by Supermarine Aviation Works (Vickers) Ltd initially on a private venture basis, was highly influenced by a desire to offer a higher performance than had been previously achieved by the F.7/30 design.  This, combined with a further desire to advance the potential of the Rolls-Royce Merlin and Griffon engines, saw their parallel development form an integral part of the Vickers Supermarine Spitfire story.
Air Ministry Specification F7/30 called for a 4 machine gun carrying fighter aircraft, capable of at least 250 mph, for which Vickers Supermarine submitted the Type 224. It was a bulky, gull-wing, open cockpit monoplane, powered by a 600hp Rolls-Royce Goshawk engine and made its first flight in February 1934. Unfortunately, it was an immediate disappointment to its designer.
An immediate re-think was called for and Chief Designer R.J. Mitchell turned their attention to the previously more successful Schneider Trophy seaplane designs such as the Supermarine S6B.  This led to the submission of the Vickers Supermarine Type 300 although this too was rejected by the Ministry. The Supermarine Design Team immediately instigated a number of significant changes, such a enclosing the cockpit and smaller, thinner elliptical wings.
November 1934, saw the introduction of the Rolls-Royce PV-XII V12 engine, later simply known as ‘the Merlin’. This engine, combined with the new submission saw the issue of contract AM361140/34 and Mitchell found himself with £10,000 for the production of a prototype.
On 5th March 1936, the prototype (K5054) took off from Eastleigh Aerodrome, piloted by Captain Joseph ‘Mutt’ Summers. With this flight a legend was born.
The first true flight of the Vickers Supermarine Spitfire came just 4 months after the maiden flight of what is considered to be its partner aircraft, the Hawker Hurricane. 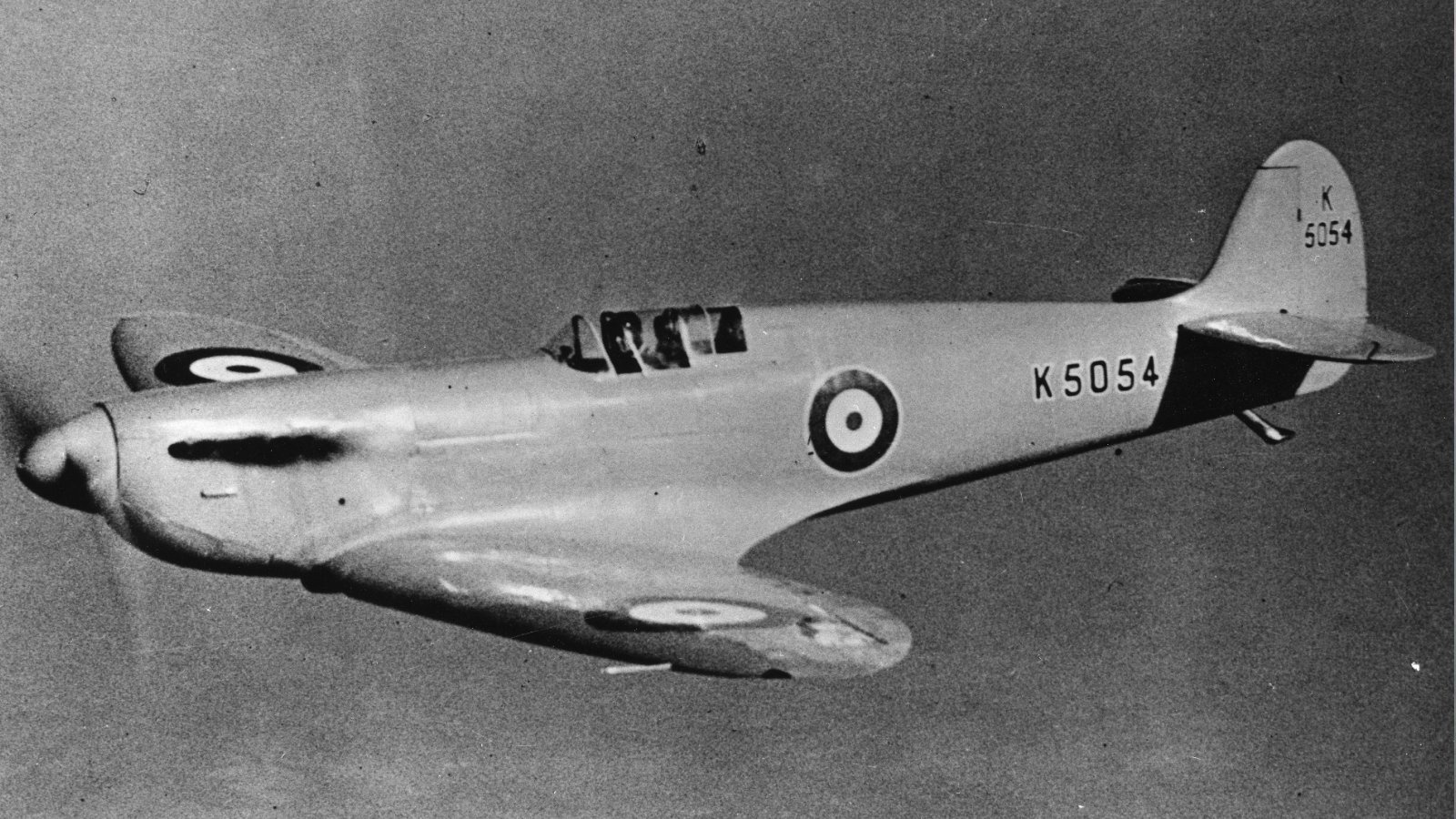 Supermarine Spitfire Prototype K5054 first flight 5th March 1936
Development flying of the new aircraft continued at a pace and 10th March 1936, saw the first undercarriage retraction, alongside trials of different propellers in order to increase maximum speeds. Such was the satisfaction with the aircraft that Summers handed all test flying to his assistants, Jeffery Quill and George Pickering. He did however, return to fly the aircraft (K5054) to the A & AEE at RAF Martlesham Heath for acceptance trials.
A week later, the Air Ministry declared their enthusiasm with the design to such a degree that they placed an immediate order for 310 Vickers Supermarine Spitfires.
Meanwhile sadly, R.J. Mitchell’s health was in severe decline after his initial cancer diagnosis in 1933. Against all medical advice nevertheless, he continued to work and even gained his pilot’s licence in July 1934.  Although he was unable to attend the maiden flight when the cancer returned 2 years later, Mitchell was often seen watching the Vickers Supermarine Spitfire fly from his garden in nearby Russell Place, Portswood, Southampton. Sadly R.J. Mitchell, the Father of the Vickers Supermarine Spitfire, passed away on 11th June 1937.  His aircraft and his story is reflected in the 1942 Hollywood movie 'The first of the Few', starring Leslie Howard and David Niven.
With Mitchell's death, the design and development responsibility for his iconic aircraft passed to Joseph (Joe) Smith.
Initially, full-production was beset with problems, the biggest of which was a lack of capacity at Supermarine’s Woolston factory which was producing the Supermarine Walrus and Supermarine Stranraer Flying Boats. In fact, it was mid-1938, by the time the first production Vickers Supermarine Spitfire emerged at Woolston, and although outside contractors were supposed to be involved in the aircraft manufacture, Supermarine’s parent company (Vickers-Armstrong) was not keen to release the blueprints to external manufacturers.
As a result, the Air Ministry threatened to stop production totally by forcing Supermarine into the sub-contract production of Bristol Beaufighters.  This had the desired effect and the management of Vickers-Armstrongs gave the Ministry an assurance that the delays would be overcome and a further order for 200 Vickers Supermarine Spitfires was placed in March 1938.
Production at Woolston was disrupted once again when it was severely damaged by daytime bombing raids on the Portsmouth and Southampton Dockyards on 24th and 26th September 1940. Whilst the main target during the 'Southampton Blitz' was generally the shipping, the Supermarine Aviation Works was specifically targeted. Thankfully, by this time most of the component jigs had been dispersed to sub-contractors around Southampton and the Home Counties. More importantly however, much of the production buildings and 110 people were lost, emphasising the importance of spreading aircraft manufacturing throughout the UK.
In the Midlands, and despite the plans for an aircraft factory being laid down in 1938, production of Vickers Supermarine Spitfire was troublesome at the Castle Bromwich Works in Birmingham.  The responsibility for the creation and management of this growing shadow factory was initially given to Morris Motors. Unfortunately, they failed to secure the necessary skilled workforce required for building stress-skinned aircraft. Because of this, and with the cost and delays in the factory construction spiralling out of control, only half of the facility was completed when production finally started on the first aircraft in 1940.
Eventually, the Government handed control of the facility to Vickers-Armstrongs who immediately imported key figures from Vickers Supermarine’s management and workforce. Things changed very quickly and at the height of its production, Castle Bromwich Works were producing 320 aircraft per month, with the last of their 12,291 Vickers Supermarine Spitfires emerging off the production line in June 1949.
The Vickers Supermarine Spitfire was produced across 24 marks, with total production thought to be between 20,300 and 20,400 aircraft. 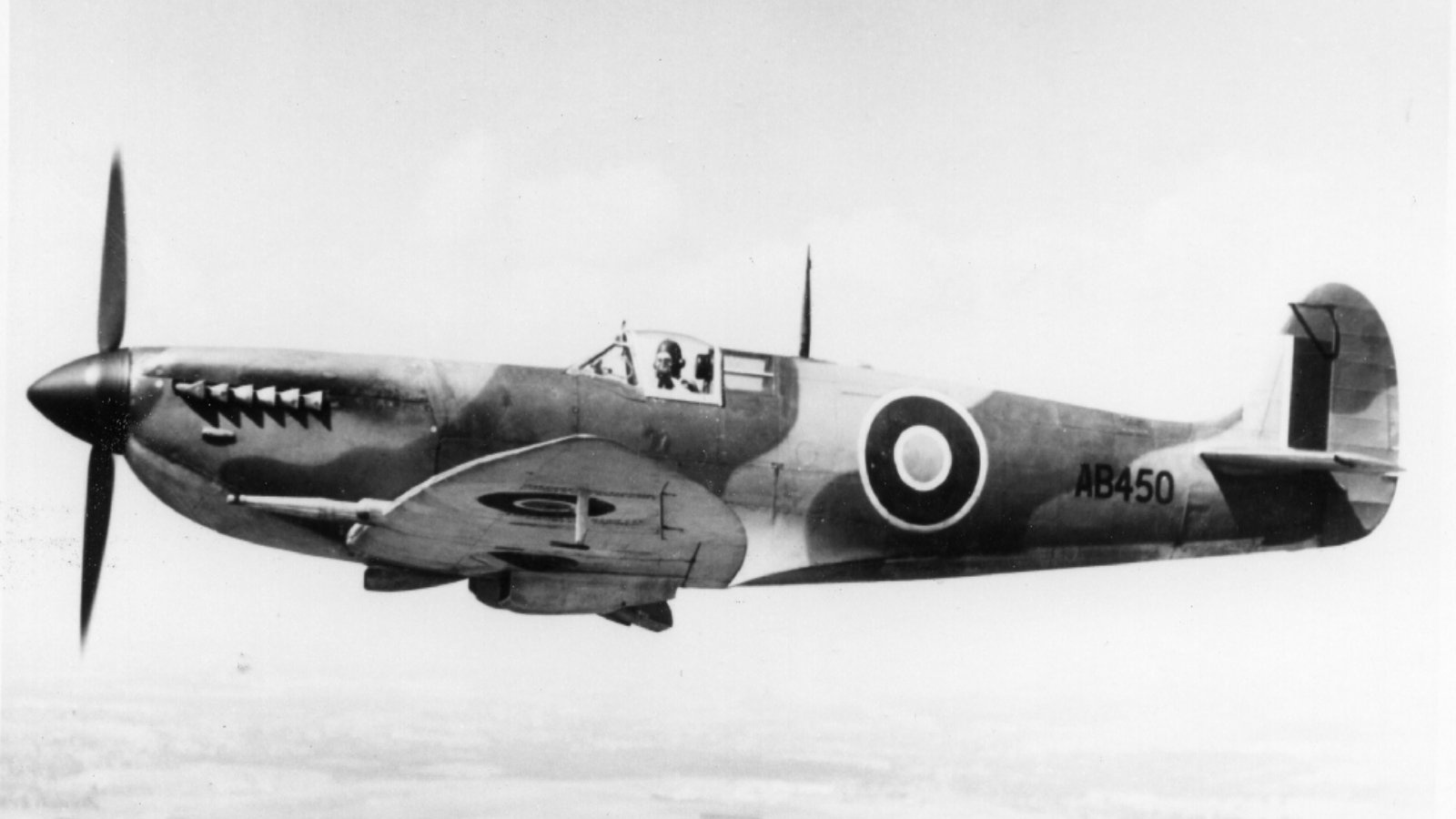 Vickers Supermarine Spitfire HFVII AB450 prototype in flight
Numerically, the most important marks were the Vickers Supermarine Spitfire MK.I, MK.V, MK.VII, MK.IX and MK.XIV, of which the MK.V (Merlin 45) and MK.IX (with Merlin 61 and two-speed / two-stage supercharger) contributed more than half of the production total.
The Rolls-Royce Griffon engine was introduced in the MK.XII and mainly used on the Mk.XIV, Mk.XIX, as well as a number of subsequent types.
The development of new Vickers Supermarine Spitfire models was partly spurred on by enemy aircraft developments such as the Messerschmitt Bf109 and Focke-Wulf 190 as well as the demands of new roles, notably high altitude photo-reconnaissance. There were also a number of interesting variants, one of which was a 'Hooked' Mk V version which formed the basis for the Supermarine Seafire. 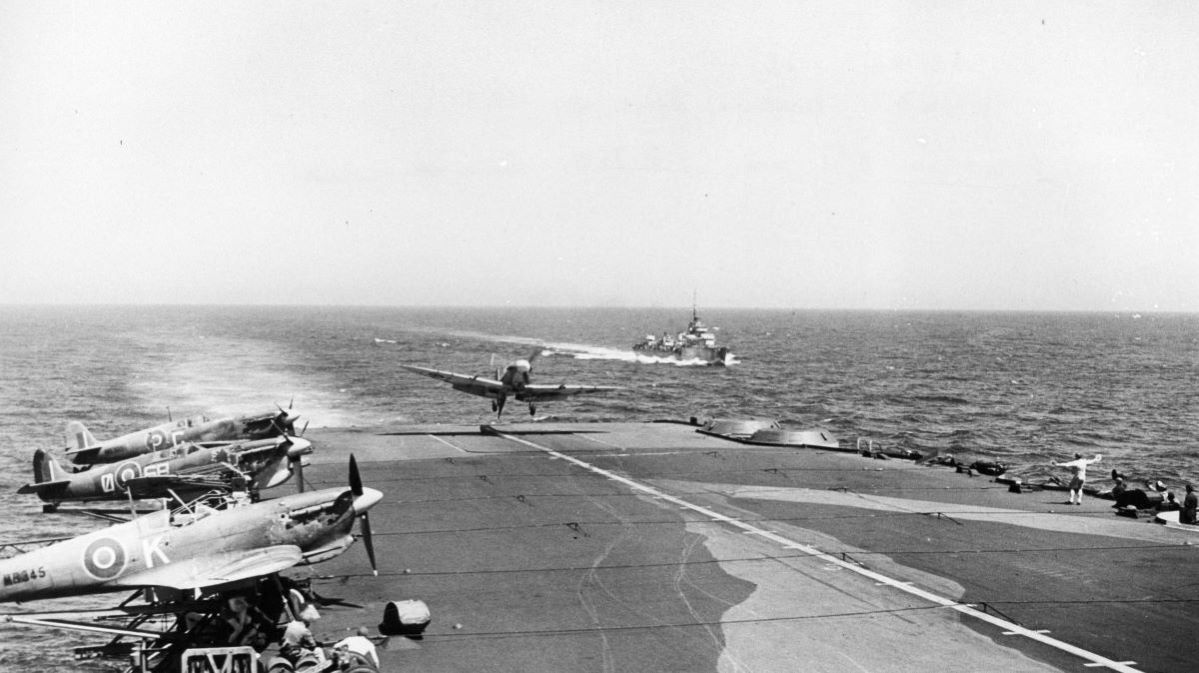 Spitfire FV (Hooked) possibly P8537 landing on HMS Formidable.
Although there were plans for 50 'folded wings' aircraft to be built, the order was cancelled by Winston Churchill in favour of the Fairey Fulmar.
The ability of the Vickers Supermarine Spitfire to support progressive and extensive development is reflected in the specification data given below.