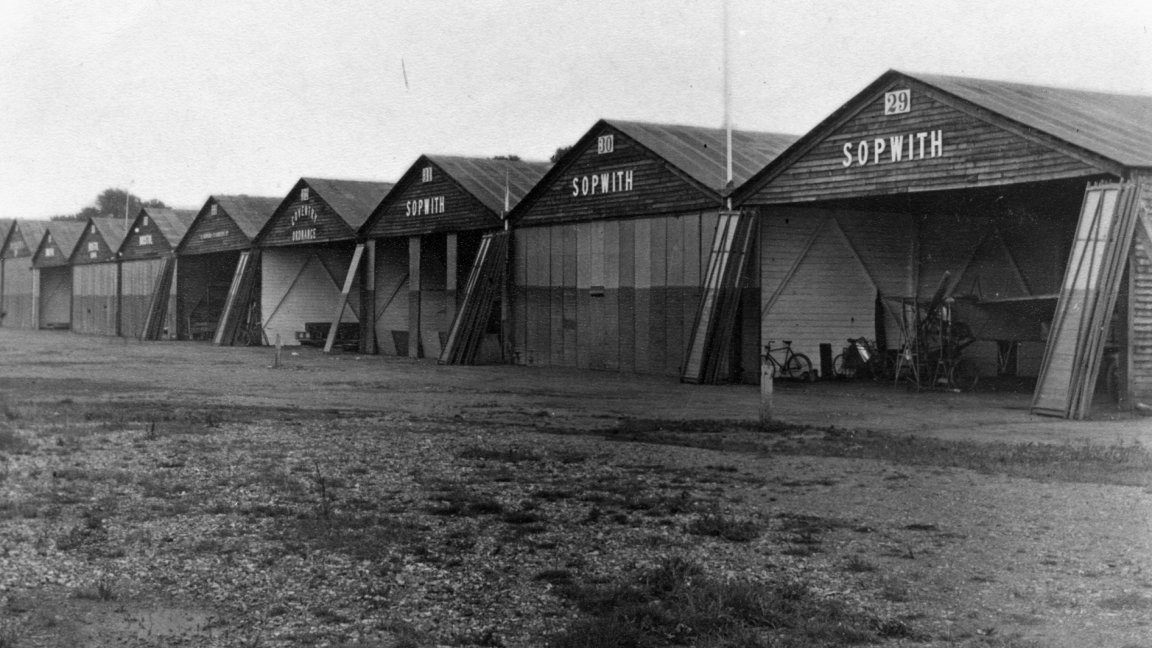 Sopwith Hangars at Brooklands
Sopwith was already a well-known sportsman with interests in aviation, yachting and motor racing and many of these influences are reflected in many of his early designs.
The first Sopwith factory opened in December 1912 at a disused Ice Rink in Canbury Park Road, Kingston and it was here that they produced
one of their first aircraft, the Sopwith Three-seater for the newly formed Royal Flying Corps.
This initial venture was followed a year later by a collaboration with S.E. Saunders Boatyard in Southampton which resulted in the Sopwith Bat Boat, designed and produced for the Royal Naval Air Service and built at Woolston.
However, it was their victory in the Schneider Trophy Race of 1914 that brought Sopwith real success and resulted in orders for the production of 42 Sopwith Tabloids and 136 Schneider Float Plane variants.
During World War I more than 16,000 Sopwith designed aircraft were built in Britain and France and the company employed over 5,000 people.  As part of the war effort many Sopwith designs were also being manufactured by sub-contractors throughout the country. 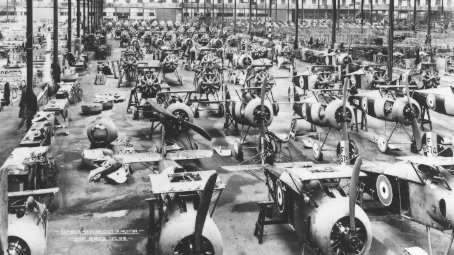 Sopwith Salamanders at The Hawker Ham Works, Richmond, Surrey
Towards the end of the conflict, Sopwith took out a lease on the National Aircraft Factory No 2, at Ham to the north of Kingston and just a mile from the Canbury Park Works.  This allowed them to increase the production rate of the Sopwith Snipe, Dolphin and Salamander.
However, with the end of hostilities came a financial crisis for Sopwith and the company attempted to produce aircraft for the civil market based on their wartime designs such as the Pup and Camel.
Unfortunately, the wide availability of war-surplus machines meant that this was never economically viable. Sopwith even tried to produce motorcycles under licence from ABC and set up ABC Motors Limited in 1919 but this also failed.
By 1920, the Sopwith Aviation Company was unable to face the financial demands from the Governments Excess War Profits Duty and were forced into liquidation.  The lease on the Ham Works was sold to Leyland Motors and other assets were disposed of.
Despite this huge failing of one of the country’s largest aircraft manufacturers, T.O.M. Sopwith, Harry Hawker and Chief Designer Fred Sigrist went on to form the hugely successful HG Hawker Engineering Company (see separate page) which quickly acquired the Sopwith Aircraft design patents, as well as taking on the support of pre-existing Sopwith aircraft.