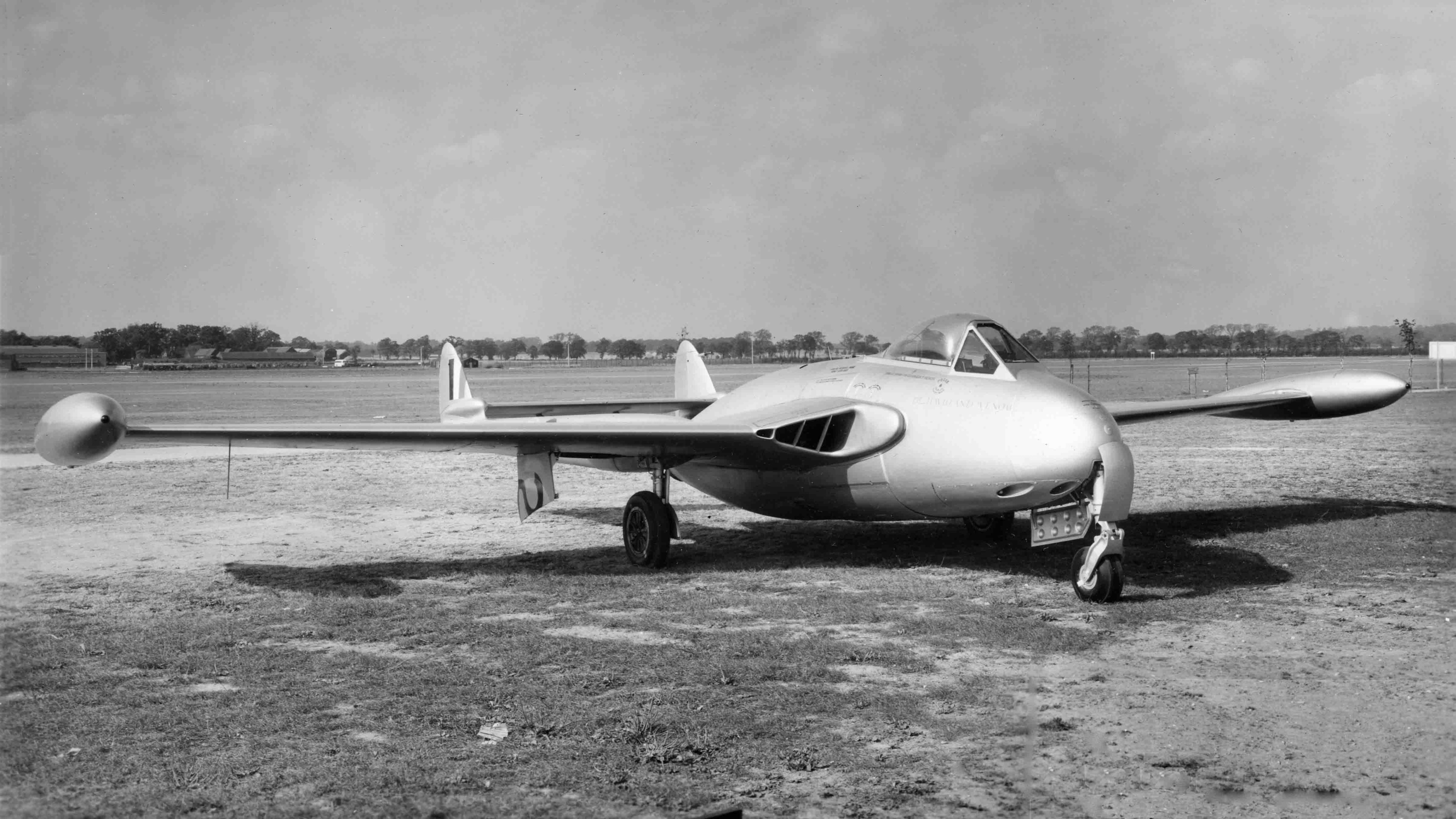 DH112 Venom prototype photographed in September 1949 before tailplane tip extensions were added.
The De Havilland Aircraft Company DH112 Venom was a post-war single-engine jet fighter. It was a development of the DH100 Vampire fighter but with a thinner wing section and wing leading edge sweep. It was also designed around the more powerful DH Ghost engine, rather than the DH Goblin of the DH100 Vampire and can readily be distinguished by the additional wingtip-mounted fuel tanks.
Two prototypes were built, these being modified DH Vampire FB.5 aircraft. The first prototype (VV612) was first flown on 2nd September 1949 by De Havilland Test Pilot John Derry, whereafter it was delivered to Boscombe Down for official trials and evaluation. During these trials the aircraft out performed many of the contemporary fighters involved in the mock battles.
The second prototype (VV613), flew on 23rd July 1950 before joining the test program in April 1951.
After the prototypes, production aircraft were fitted with a lengthened tailplane which extended beyond the twin tailbooms. 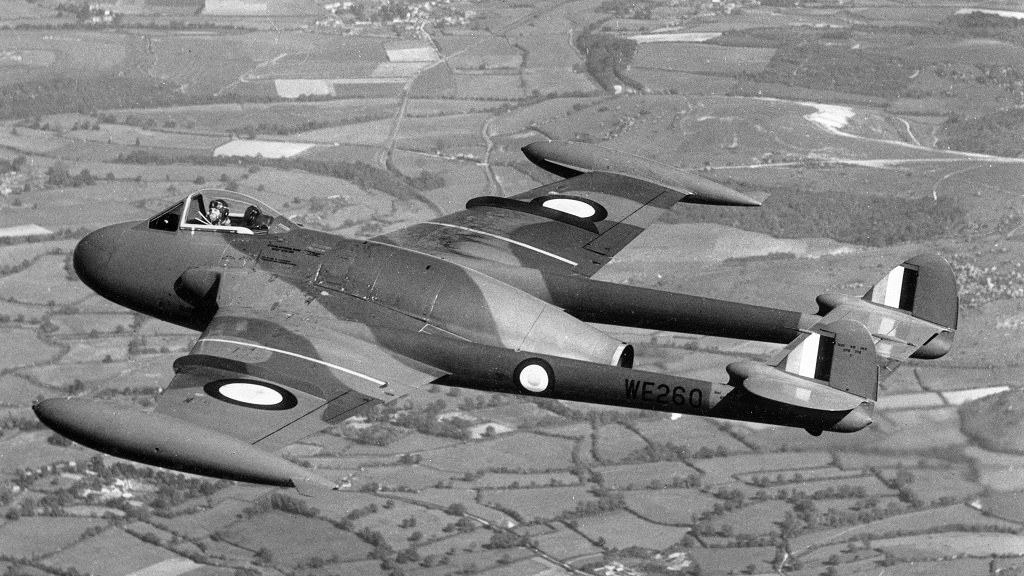 Air to air photograph of RAF Venom FB.1 WE260
The initial service variant was the DH Venom FB.1, of which 375 were built and entered service with the RAF in Germany in mid-1952.
De Havilland Aircraft Company also built a two-seat night-fighter version of the DH Venom, mating the fuselage of the DH100 Vampire NF.10 to DH112 Venom wings with in a 'side-by-side' cockpit configuration. The first prototype (G-5-3) was built as a private venture and flew for the first time on 22nd August 1950.
Ninety production aircraft were ordered for the RAF as the DH112 Venom NF.2, the first of these flying on 4th March 1953.
The DH112 Venom NF.2 was powered by the 4,950lbst Ghost 104 turbojet and some aircraft were fitted with the frameless canopy and larger fins of the Vampire T.11, these being then designated DH112 Venom NF.2A. 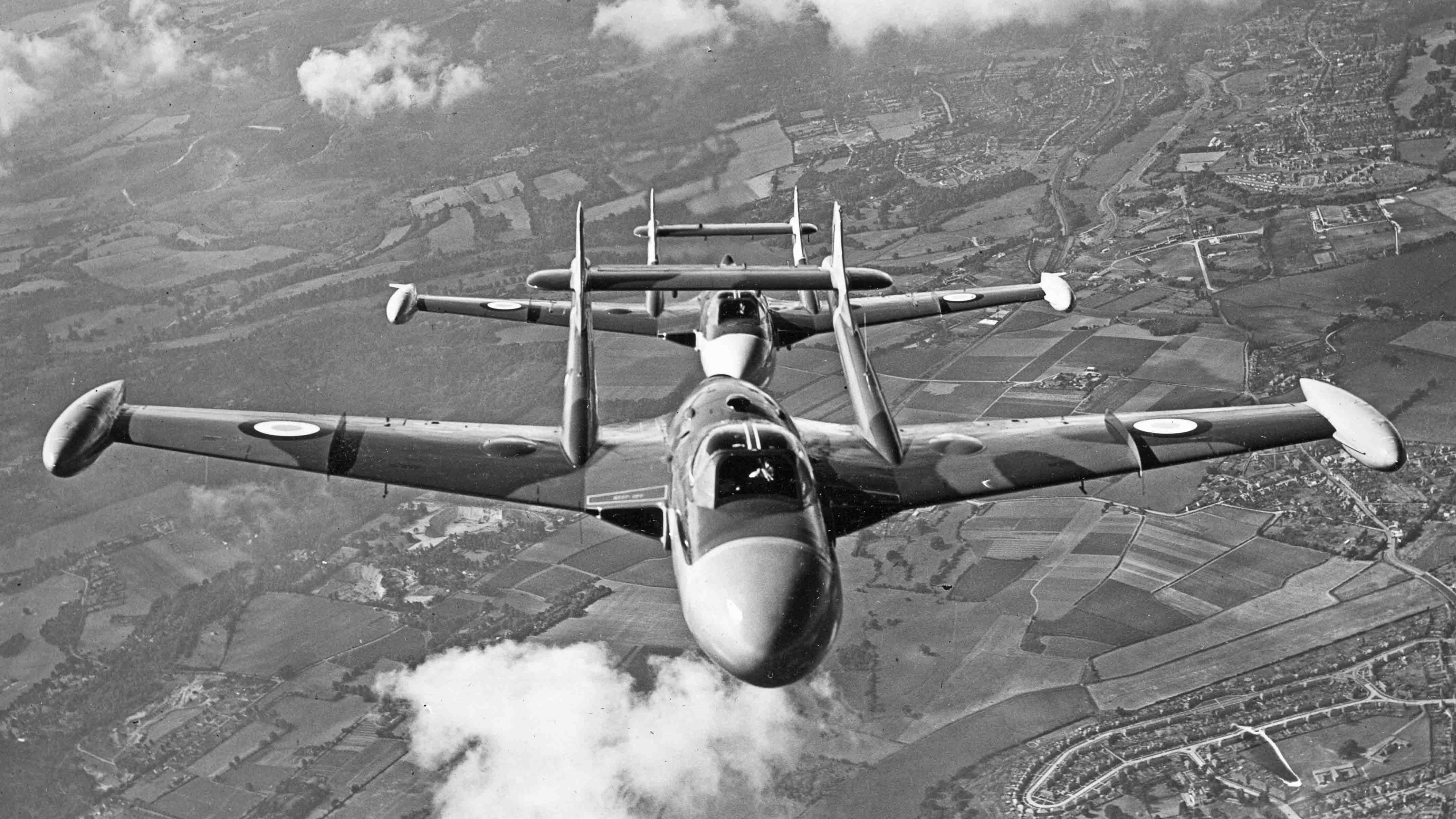 RAF DH112 Venom NF3 WX785 followed in line astern by Sea Venom FAW20.
The later DH112 Venom NF.3 (129 built), featured an improved Westinghouse AN/APS-57 radar and other features of the DH Venom FB.4.
A two seat night fighter variant was also exported to Sweden as the DH112 Venom NF.51 with 62 being delivered and designated as the Type J33 when in Swedish service. 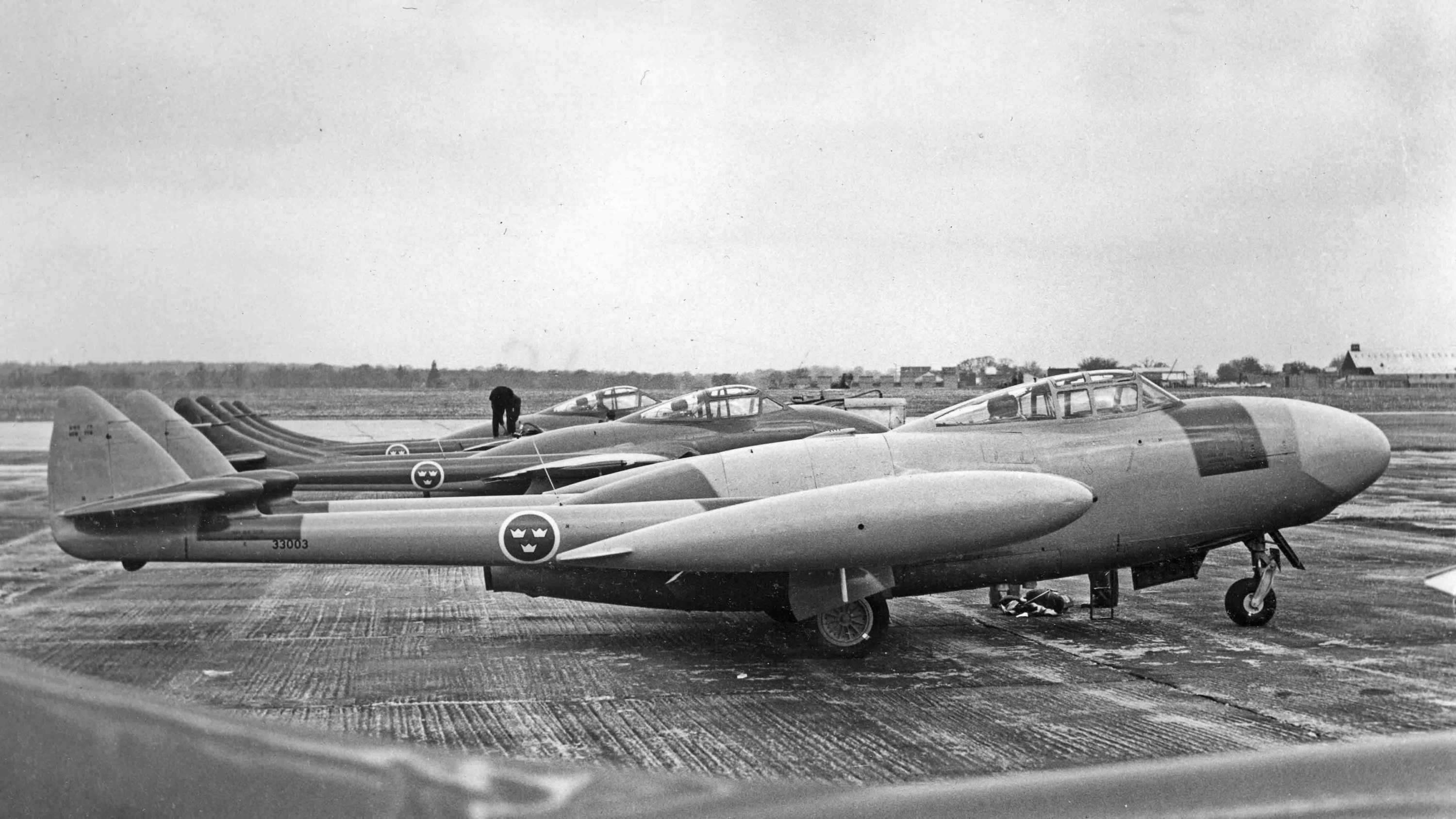 A side view of Swedish Air Force DH112 Venom NF51 serial 33003.
The DH112 Venom FB.4 introduced the more powerful DH Ghost 105 engine. It was also fitted with a Martin Baker Mark 1F ejector seat and cockpit air conditioning. The DH112 Venom FB.4 also introduced larger, squarer tailfins, with a rear ‘acorn’ fairing and power-boosted ailerons and rudders. 150 were built whilst most remaining FB.1 aircraft were also upgraded to FB.4 standard.
The DH112 Venom was armed with four 20-millimetre Hispano V cannons and could carry up to 2,000lb of external stores. These would typically comprise of two 1,000lb bombs or eight rockets, or drop tanks.
The aircraft served in many theatres including the hotter climates of Cyprus, Africa, the Middle East and Asia.   Throughout the 1950s, DH112 Venoms were dispatched to all corners of the British Empire and 4 aircraft set a new speed record, flying between Iraq and South Africa, covering the 807 miles in just 1 hour 23 minutes.
In service, the DH112 Venom encountered issues with handling at high Mach numbers and with structural failures. These combined to limit the type’s service career with the RAF, and saw it being replaced in service by the Hawker Hunter and Gloster Javelin.
The last RAF DH112 Venom FB.4s were retired from service in 1962.
The DH112 Venom was exported to Iraq and Switzerland (FB.50); 60 of the Night Fighter version were sold to Sweden as the NF.51; the last export version was the FB.54, which was sold to both Venezuela and Switzerland. 250 Venom (150 FB,1 and 100 FB.54) were built under licence in Switzerland.
Outside of the UK military, the Swiss Air Force DH112 Venoms were the most prolific and remained in service until around 1984 with many being fitted with a turned-up nose. The Swiss also cleared the type to carry a wider range of underwing stores, including a reconnaissance pod. 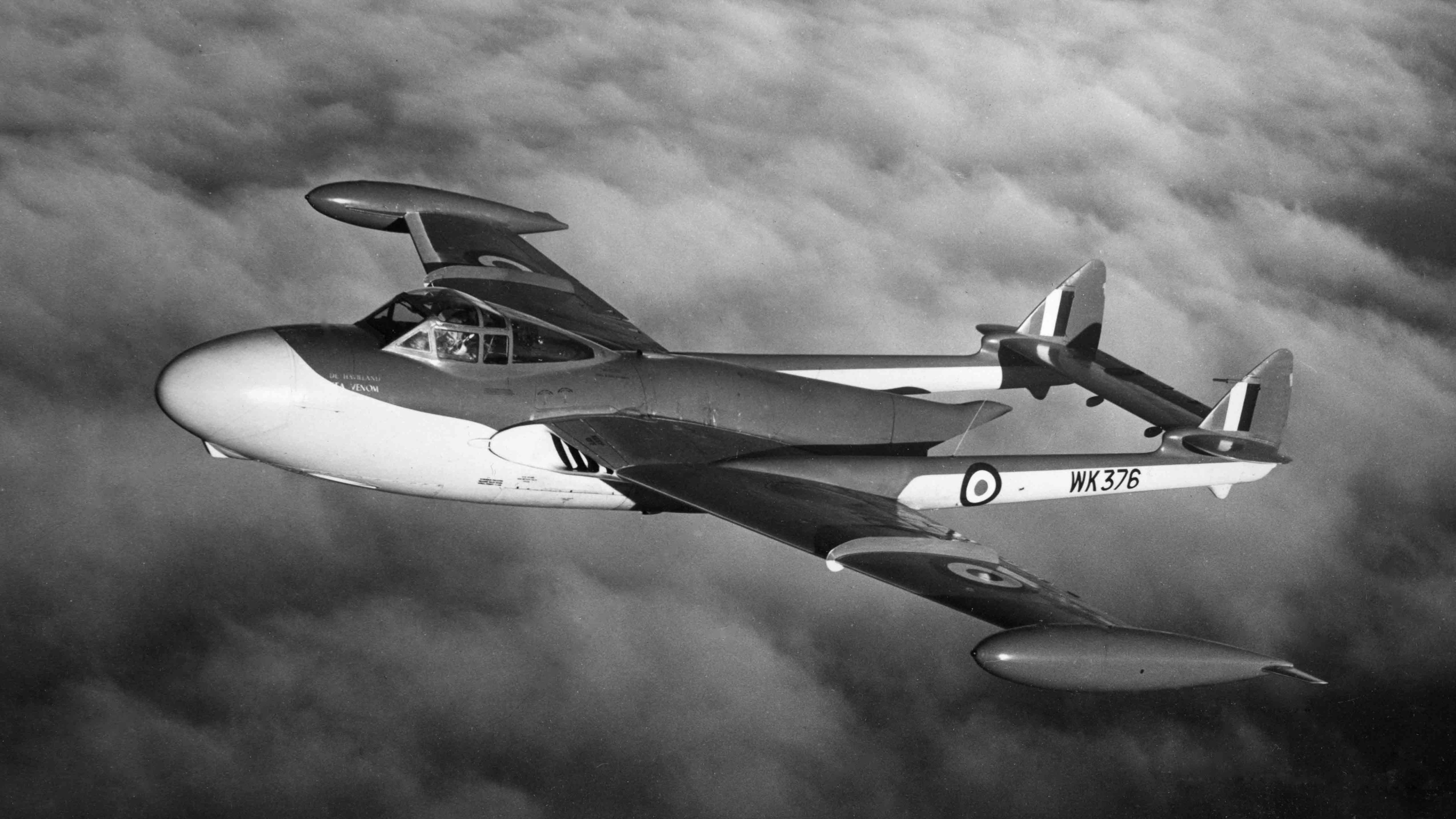 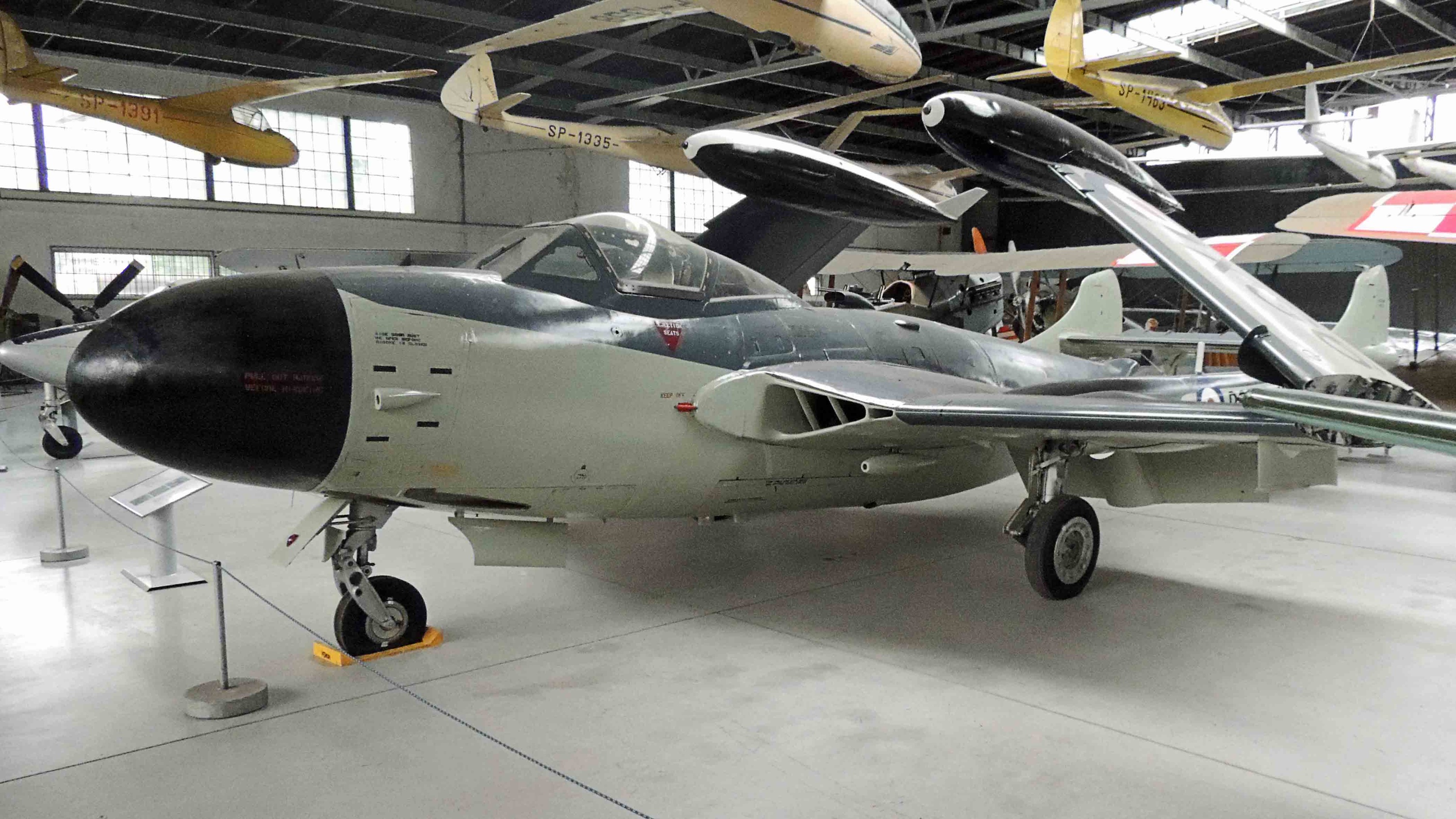 RN DH112 Sea Venom FAW.21 XG613 in the Polish Aviation Museum, Krakow.
The Royal Navy obtained a total of 256 DH112 Sea Venoms of all types and a number participated in the Suez Crisis in 1956, operating in a ground attack role.
39 aircraft were exported for use by the Royal Australian Navy, being designated DH112 Sea Venom FAW.53.
The DH112 Sea Venom was also built under licence in France as the Sud Est Aquilon. The French initially procured four FAW.20 aircraft in kit-form, and these were assembled by Sud Est, the first of these flying on 20th February 1952. They were then followed by 25 Aquilon.20s, built to a similar specification. A single prototype Aquilon.201,  fitted with ejection seats and a new sliding canopy, was followed by production of the Aquilon.202, of which 25 were built. 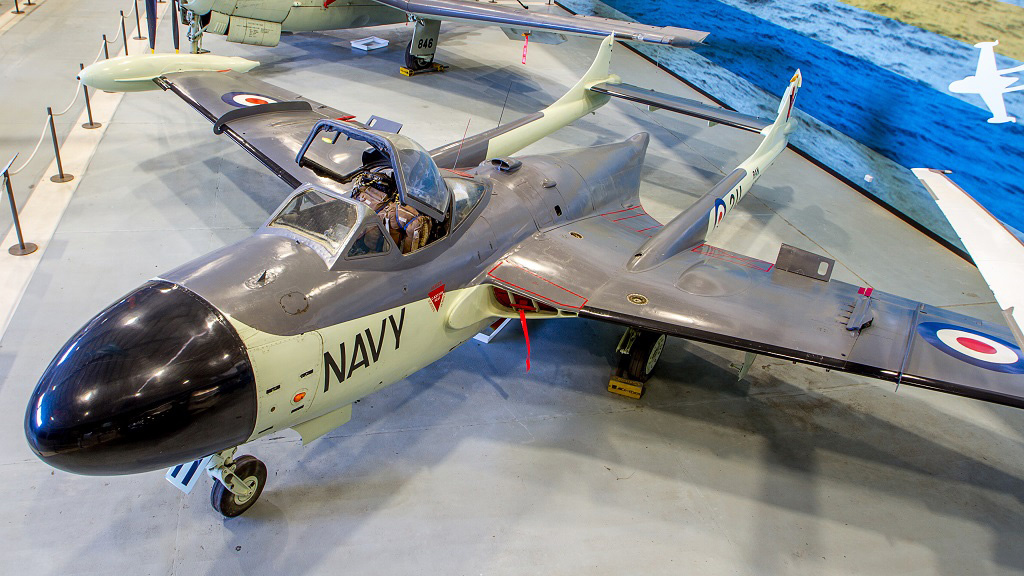 Significant numbers of Venom and Sea Venom / Aquilon survive in museums, with a limited number of airworthy examples. Aircraft are preserved in the UK, France, Israel, Poland, Sweden, Switzerland, Australia, New Zealand, USA, and Venezuela. A partial selection is listed below: