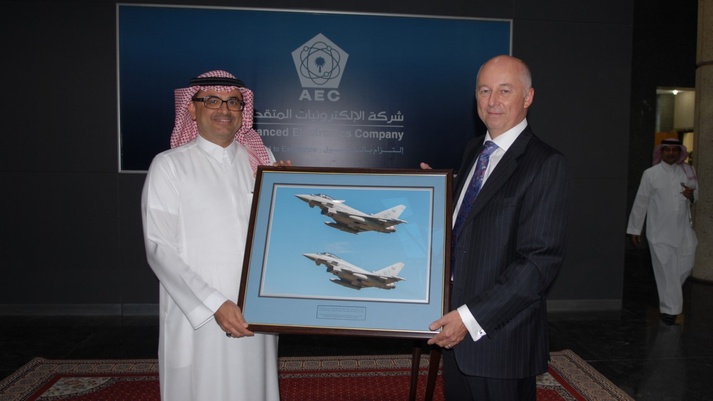 The Advanced Electronic Company (AEC), based in Saudi Arabia, has become the first approved Typhoon avionics repair agent outside Europe and as such is now an approved supplier to BAE Systems for 2 Avionics boxes on the RSAF’s Typhoon aircraft.

This is a major step forward for the defence industry in Saudi Arabia and it enables AEC and BAE Systems to further their local support arrangements to the Royal Saudi Air Force's (RSAF) Typhoon aircraft with immediate effect.

As part of BAE Systems' Industrialisation Programme the Company has been working closely with AEC and Rockwell Collins Deutschland, the original equipment manufacturer (OEM), to establish indigenous repair capabilities in the Kingdom in order to provide sovereign support to the RSAF's Typhoon fleet.

Over the next three years, BAE Systems Saudi Arabia and AEC, working together with other OEM's will transfer the repair capability of a further 35 Avionic boxes to the Kingdom creating in excess of 120 highly skilled technical jobs for young Saudis.

At an event to celebrate this milestone Mr Andy Carr, Managing Director and CEO of BAE Systems Saudi Arabia, commented that: "Industrialisation is a cornerstone of BAE Systems' strategy in Kingdom; success in this area very important to our customers, our partners, the Saudi community and the company. I congratulate AEC on their success in achieving this significant milestone."

"AEC has shown over a long period of time that is a very capable organisation and takes a great deal of pride in what they do. It has previously worked on elements of the Tornado programme where it was the best performing supplier on the whole supply chain."

Dr Ghassan Shibl CEO of AEC, added: "This is a small first step for AEC and we look forward to developing our Typhoon capability over the next few years. We are proud to be working so closely with BAE Systems and to be a part of the Typhoon family."