A Partnership to Strengthen the Security of Europe
UK and Belgium
The proposal to Belgium represents the most comprehensive Air Force to Air Force partnership ever offered by the RAF; building on 70 years of collaboration.

It represents the most unique and comprehensive proposal ever to be offered by the UK Government under the auspices of Defence and Security agreements.

The offer will see the Eurofighter Typhoon infrasturcture and the expertise of the Royal Air Force shared with the Belgian Air Component to offer minimal risk and expenditure to the ACCaP requirement, including operational support and training for pilots and technicians.

Embarking on a new chapter of defence and security co-operation will continue the rich history enjoyed between the UK and Belgium to date.

The offer will also bring opportunities to work more closely with Eurofighter partner governments and companies.

The Eurofighter family would welcome Belgium to become its next European partner, strengthening the security of Europe and our NATO allies for decades to come with the most advanced multi-role aircraft weapon system available.

The UK and Belgium have a long and proud military and trade history that dates back to the signing of the 1839 Treaty of London. During the Second World War, many Belgian pilots joined the UK Royal Air Force, leading to the creation of 349 and 350 Squadrons, which still exist within the Belgian Air Component today. 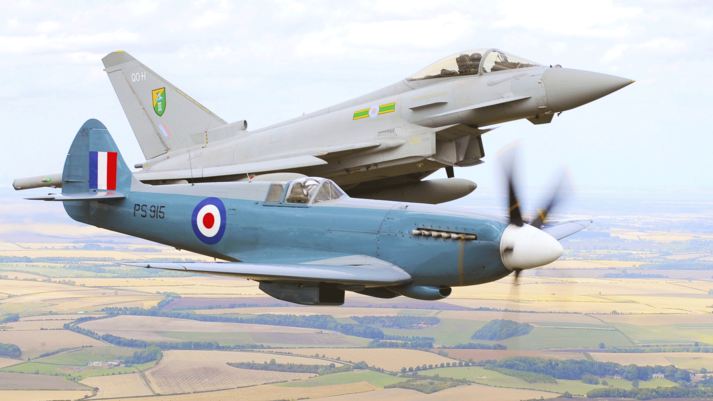 No 349 (Belgian) Squadron was formed as an RAF squadron by Belgian personal at RAF Ikeja, near Lagos, Nigeria on 10 November 1942. It later relocated to the UK where it was involved in the war effort, flying the Supermarine Spitfire.
No 350 Squadron meanwhile, the first RAF squadron to be formed by Belgian personnel, was brought into existence in the UK at RAF Valley in November 1941. The squadron also operated the Spitfire at first on convoy protection duties over the Irish sea and was also involved in offensive operations over France.
The two countries have also been major participants in some of the most significant defence and security developments of modern times.
In March 1948, Belgium joined with Britain and others in an agreement to establish a joint defence system. This agreement was known as the Treaty of Brussels. It led to Belgium and the UK becoming two of the initial signatories of the treaty establishing NATO in April 1949.
Today strong, significant and long-standing trade links dating back a century continue to exist between the UK and Belgium.

100 Years of History: The Story of Samuel Franklin Cody

In January 2017, a special commemoration event was held in Ghent to commemorate 100 years since Samuel Franklin Cody - the son of UK aviation pioneer Col Samuel Franklin Cody Snr -became the first Royal Air Force 41 Squadron pilot to be killed in action during the First World War.
Samuel Franklin, known as Frankie, arrived Ghent in 1895 before the family moved to the UK.
His father, known for developing 'man lifting' kites, was invited by the army to develop and build an aeroplane at Farnborough. In October 1908, he became the first man to fly in England.
Following in his father's aviation footsteps, Samuel Franklin Cody Jnr elisted in the Army in 1914 before eventually joining the Royal Flying Corp in June 1915 and being promoted to Corporal in 1916.

Representatives from 41 Squadron, the Belgian Air Component and various dignitaries, including the UK Ambassador to Belgium, Alison Rose, were present at the commemoration in Ghent on January 23, which also included a fly-past.

The Royal Air Force and the Belgian Air Component - Our Heritage

There are a number of long-standing links between the UK and Belgium's air forces:

No 349 Squadron was formed on 10 November 1942, at Ikeja in Nigeria, as a Belgian-manned fighter squadron for service in the Belgian Congo.
After flying Curtiss Tomahawks for several months, the squadron's pilots were diverted to ferrying fighters to the Middle East, before being disbanded in May 1943.
Reformed on 5 June 1943 at RAF Wittering with Supermarine Spitfires, the squadron became operational on 13 August. It moved south in October of that year and began flying sweeps over France on 24 October.
After covering the Normandy landings as part of No 135 Wing, No 349 moved to France from August 1944 until February 1945, when it returned to the UK to re-equip with Hawker Tempest V.
Conversion was abandoned in April and the squadron moved to the Netherlands to join No 132 Wing. After a period with occupation forces, No 349 passed to the control of the Belgian Air Force on 24 October 1946.

No 350 Squadron was formed at RAF Valley, in the UK, on 12 November 1941 as the first Belgian-manned fighter squadron.
Equipped with Spitfires, it became operational on defensive duties on 22 December and moved south in April 1942 to begin flying sweeps over northern France.
Withdrawn to northern England in March 1943, No 350 resumed offensive operations in October and joined Second Tactical Air Force in preparation for the invasion of Europe.
After covering the Allied landings, the squadron re-equipped with Spitfire XIVs and for the following month was engaged in intercepting flying-bombs over southern England. This was followed by sweeps over the Netherlands.
In December 1944 the squadron moved to Belgium supporting Allied armies until the end of the Second World War. After serving with the occupation forces, No 350 was transferred to the control of the Belgian Air Force on 24 October 1946.

No 609 Squadron was formed on 10 February 1936 at Yeadon as a day bomber unit of the Auxiliary Air Force. Flying Supermarine Spitfire Mk Is, it was heavily involved in the Battle of Britain.
It began taking part in offensive sweeps over France in February 1941 and in the spring, a handful of Belgians joined the squadron, most of them experienced combat pilots. They formed the core of the continuous Belgian presence throughout the Second World War in one of the Royal Air Force’s most successful fighter units.
In April 1942, Hawker Typhoons started to arrive and began operations on 30 June, being used mainly for defensive patrols. Day and night intruder sorties began to be flown in November and on joining Second Tactical Air Force in March 1944, No 609 adopted rockets as its main weapons.
In preparation for the invasion of Europe, the squadron moved to Normandy in June to provide the 21st Army Group with air support.
After the breakout from the beachhead, the squadron moved forward to the Low Countries and for the rest of the Second World War flew armed reconnaissance sweeps.
The squadron disbanded on 15 September 1945 and reformed as part of the Auxiliary Air Force on 10 May 1946. It was disbanded once again, along with the rest of the RAuxAF, on 10 March 1957.
Finally, it was reformed again at RAF Leeming on 1 July 1998, and remains today as part of the RAF Regiment Reserves.

Belgium’s First World War ace, Fernand Jacquet, was a member of 1 Squadron, and the only Belgian awarded the Distinguished Flying Cross (DFC). His seventh victory, in 1917, confirming him as an ace, was achieved flying the Sopwith Strutter.
1917 - 1 Squadron was equipped with the Sopwith Camel
1939 - Acquisition of Hawker Hurricanes to defend Belgian airspace, replacing the Firefly
1940 - Squadron pilots joined the Royal Air Force and took part in the Battle of Britain, including Rodolphe, Count de Hemicourt de Grunne, who flew with 32 and 609 squadrons of the Royal Air Force
1947 - In October the squadron re-formed on Spitfire F.XIV, initially under 351 Squadron identity, before being renamed 1 Squadron in February of the following year
1948 - The squadron transited to their first jets, the F-84, in the early 1950s
Latest updates