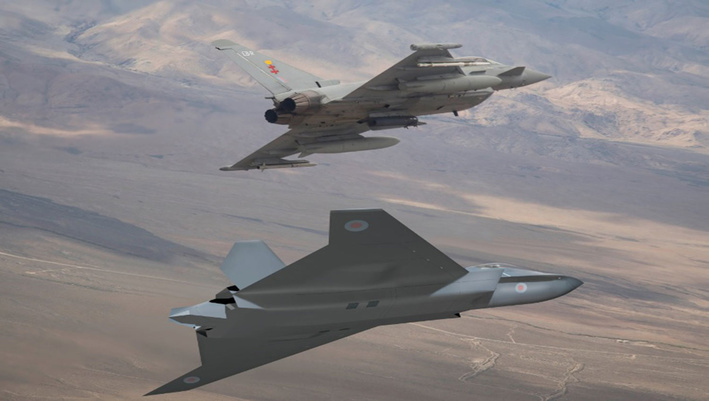 Eurofighter aircraft from across Europe will stand alongside the UK’s future combat air strategy concept model ‘Tempest’ at the 2018 Belgian Air Force Days at Kleine-Brogel.
A Eurofighter ‘show of force’ will form a static display line-up on September 8 and 9, in addition to a spectacular air display from the UK Royal Air Force’s Eurofighter Display Pilot, Flt Lt Jim Peterson, demonstrating the power, speed and impressive agility of the multi-role combat aircraft.
Also present will be a full scale model of ‘Tempest’ – the future combat aircraft system concept developed by the UK Ministry of Defence with industrial partners. First revealed at the 2018 Farnborough International Air Show, Tempest illustrates some of the concepts and capabilities the UK expects to see on a future system - concepts which will continue to evolve.
The UK’s Combat Air Strategy, launched alongside the Tempest model at the Farnborough show, outlines a clear and critical role for Eurofighter as the primary route to developing the next generation of world-leading capabilities and technologies.
Eurofighter, which is being considered as part of the Belgian F-16 replacement programme, is the true European solution. With 500 aircraft already amongst Belgium’s immediate neighbours, it is the backbone of European combat air power, will remain the continent’s dominant combat aircraft for decades to come and will provide the technology development path through to European next generation programmes.
Alison Rose, the UK’s Ambassador to Belgium, said: “We are delighted that both the Tempest model and Eurofighter aircraft from across Europe will be coming to Kleine-Brogel as part of this year’s Belgian Air Force Days event. Eurofighter is the European aircraft defending skies across the continent. It is 100% designed, manufactured and assembled across Europe and will provide the technology bridge to future programmes. It is therefore fitting that so many aircraft, including the spectacular Royal Air Force air display, will be part of this celebration here in the heart of Europe.”
Anthony Gregory, Eurofighter campaign director for BAE Systems, said: “We are delighted to be returning with our European partners to this year’s Belgian Air Force Days. As part of the F-16 replacement programme, we and our partners believe Eurofighter is the solution which will meet all of Belgium’s operational, security and industrial requirements today and for decades to come, including the development of collaborative relationships which are critical for future programmes. The presence of Eurofighters from across the core nations will reinforce our commitment to the future of the programme and highlight our countries’ close and enduring defence and security links with Belgium.”
Ivan Gonzalez, Airbus Defence & Space Head of Combat Aircraft Campaigns, said: “The presence of Eurofighters from across Europe is a further demonstration that Eurofighter is the true European proposal for Belgium, building on a long history of partnership. Our company has proud track record of successful collaboration with Belgian industry and the Armed Forces on military platforms including the A400M, the NH90 and the MRTT. Eurofighter for Belgium would build further on that and we are delighted so many Eurofighters will be at Kleine-Brogel.”
Andrea Nappi, Head of Eurofighter Export at Leonardo Aircraft, said: “The Eurofighter programme represents a successful and strategic example of European collaboration in the defence sector. Through this program, partner nations and industry have not only grown together but the result is a world-beating product, fully matured and capable to address developing threats for decades ahead. Participation into the program is the building block to ensure continuous technology growth‎ and the opportunity to play a significant role into any future development programme throughout Europe‎."
Contact